Contributor
There will be an update on the search for the Higgs boson by ATLAS and CMS at CERN on the 13th December (next Tuesday). Rumours are flying around the internet and CERN and I have some idea what's going to be presented but for obvious reasons you'll have to wait until things have been made public! This article is pretty good though:

Hopefully I'll be there on Tuesday so I'll be able to badly answer questions on here again!

Contributor
The BBC have an article about it as well: http://www.bbc.co.uk/news/science-environment-16074411

Seems there is some cursory data to suggest they have found the Higgs boson.

Contributor
The headline is a bit misleading, this is the passage that really matters:

For more than a week, rumours have been circulating on physics blogs that Atlas and CMS see a Higgs signal at 125 GeV, between the 2.5 and 3.5 sigma level of certainty.
These numbers represent a measure of the likelihood that any bump the scientists see is down to chance, rather than caused by a real physical phenomenon.
If those are the numbers quoted on Tuesday, it would not be enough for Cern to make a definitive statement. Three sigma counts as an "observation", while five sigma is regarded as the threshold for claiming a discovery.
Click to expand


I don't know the details of what's going to be presented tomorrow, but if both ATLAS and CMS show results with a 2-3 sigma significance like the rumours suggest it is promising for the Higgs search but it doesn't count as a discovery because with more data they could disappear completely (there are other examples of 3 sigma 'discoveries' that have turned out to be nothing).

Contributor
A challenge for you Sushi: can you explain what a boson is in layman's terms? I know this is all central to physics but I don't understand what it is or what can we do once we have confirmed it exists?

Contributor
Hmmm, well I guess the simplest way I can define them is that bosons are particles that carry/exchange forces (this is not entirely accurate***, there are plenty of bosons that are not force carriers but I think this is the most relevant description in the context we're talking about).

Now the statement that particles carry forces might be confusing straight away because typically when you think of a force in physics you think of a field, e.g. a magnetic field. This fields vs particles question is one that caused much debate, in particular when considering the behaviour of light in the 19th and 20th centuries, and in a sense is not completely resolved today. I won't go in to much detail but you find that light, for example, acts like particles in some cases (see the Photoelectric Effect) and like a wave/field in others (see Young's Double Slit Experiment). It turns out that you simply have to accept that light, and in fact all particles, can not simply be defined as a particle or a field - they are both (?!).

This is the beginning of quantum mechanics, which I won't go in to in any detail, but you are not too far from the truth if you think of a boson, a force carrying particle, as the smallest possible 'lump' of field (force) that can be transferred between two objects.

In the Standard Model, the best explanation of the fundamental building blocks of nature that we have, there are three fundamental forces with one or more associated bosons:

There are two key things missing from this model - a mechanism for generating mass and a boson for gravity. The best theory we have for generating mass is via the Higgs field and the Higgs boson which is considered part of the Standard Model but hasn't been discovered yet. Gravity turns out to be a much harder nut to crack - there is currently no accepted/correct quantum (particle) theory of gravity.

*** The more accurate description is that bosons are particles with integer (whole number) spin, spin being an internal property of particles that is very important in quantum physics. It turns out that you can have more than one boson occupying the same physical state, whereas only a maximum of one 'fermion' (with half-integer spin) can occupy the same state. Protons and atoms are in fact bosons as well.

I'll post about the Higgs seminar some time later, although it was pretty much what I was expecting.

Contributor
Well I'll give a quick update about the meeting. Firstly, I knew the meeting was going to be busy but I wasn't expecting the room to be full three hours before it started! I turned up at 12 (two hours before) to see a crowd of people being refused entry by a couple of security guards...

Secondly, the talks have now been made public (I think, sorry if you can't get access!) here: https://indico.cern.ch/conferenceDisplay.py?confId=164890

Basically both Atlas and CMS see a small excess (~2 sigma) in what would be expected without the presence of a Higgs boson. The excess lies around a Higgs boson mass of ~125 GeV (125 times the mas of a proton), or a bit less. Both experiments have also excluded the existence of the Higgs at any mass apart from a small band near this value.

The excess could disappear or it could grown in the coming year, the ATLAS speaker mentioned that with 20fb^-1 of data, if it truly is a Higgs that's been seen, it should be possible possible to formally announce a (five sigma) discovery. Current estimates for the amount of data collected by the end of 2012 are ~16fb^-1, so the Higgs situation should start to become fairly clear towards the end of next year.

I'll leave it at that for now

Staff Member
Thanks for all of that sushi.

I've just downloaded the material for some light reading later

I'm looking forward to the day when they actually discover the Higgs boson and get back to some constructive thought and deed. Galileo, Newton, Kepler, Einstein, Bohr, Schrödinger, etc just got on with the job of creating reality, not running round in circles chasing their butts at ever increasing speeds.

Contributor
What makes you think physicists at CERN are running around in circles? The discovery, or non-discovery (which would be more interesting), of the Higgs is a key part of what's happening at the LHC and it gets more media attention than anything else but it is only one area of research out of hundreds. Even if the Higgs boson is discovered the Standard Model is not complete so many people are looking for signals in data (deviations from the Standard Model predictions) that could hint at new theories/phenomena, to name one example. Also, don't forget that the LHC is the largest and most technologically advanced experiment on the planet. The fact that anyone can get it to work full stop is miraculous and takes a significant amount of work by itself. I haven't even mentioned the countless theorists who spend all their time on 'constructive thought', as you would like to call it.

Galileo, Newton, Einstein etc. all came up with new ideas based on their (or someone else's) experiments - this is how science has worked for centuries - create a theory, test the theory, create a better theory - and it's what's happening now at CERN.

What's left to discover now has already been thought of by Science-Fiction writers - the trick is to make the AG boots or FTL drive actually happen, and to do that you need things like CERN to find all the bits required.

OK, I'm in a slightly better place than I was or have been for a day or two...
So I am better able to explain what I meant by my rather provocative statement. The overriding message I got from statements from scientists interviewed by the BBC was that finding the Higgs Boson would inform future exploration, informing us where to look next. It is my contention and experience has taught me that the creative process is greatly enhanced by not knowing where you are going. Having a sense of what you are doing, looking for, hoping to achieve is not a bad thing. It just hinders revelation and serendipity. Many of sciences most profound leaps forward have been realised through the intervention of accident, chance and chaos.

In the West we say: "Seek and ye shall find". In the East they say: "When nothing is done, nothing is left undone". That doesn't mean those in the East don't invest a huge amount of energy in understanding the nature of the Universe, it just means they...

allow what exists to co-exist with what may or may not exist.

sushifiesta said:
....Galileo, Newton, Einstein etc. all came up with new ideas based on their (or someone else's) experiments - this is how science has worked for centuries - create a theory, test the theory, create a better theory - and it's what's happening now at CERN.
Click to expand


Yes, Newton stated "If I have seen further it is only by standing on the shoulders of giants."

The Large Hadron Collider (LHC) on the Franco-Swiss border has made its first clear observation of a new particle since opening in 2009.

Known as Chi-b 3P, it is a boson - the label given to particles that carry the forces of Nature.

The discovery is reported on the Arxiv pre-print server.
Click to expand

Contributor
Can't say I know anything about that, but good spot! As the LHC provides more and more data discoveries like this will start to come more frequently, with the amount of data collected at the minute I think we're tantalisingly close to a lot of new Physics. 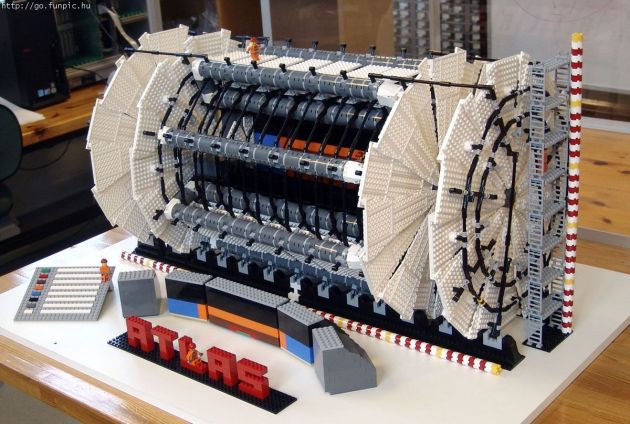 The God Particle, or, When Particles Collide!
2 3

There's Dark Matter in them there hills!