Technical Fernando Alonso would have died had it happened 20 years ago, says Max Mosley

Fernando Alonso would have died in horror crash had it happened 20 years ago, says Max Mosley.

I was at a Melbourne GP exactly 20 years ago and I distinctly remember watching and applauding as Martin Brundle did a four hundred metre sprint, jumped into a spare car and restarted a race.

Next year in a similar accident would a Halo eventually break off and act like a scythe taking a drivers head clean off?

Staff Member
Premium Contributor
Is it just me or are some people making a huge mountain out of a mole hill regarding Alonso's crash? I've just reviewed the footage of Brundle's crash and it was pretty much identical in every way. It's a shame because over all it was a pretty good GP, one of the most promising starts to an F1 season for a while and the on track stuff doesn't need to be overshadowed by a crash which you now know will make up 50% of the end of season highlights clip package on every channel. Time to move on.

Contributor
Well Mr Mosley will have done a lot to restore Alonso's doubts.
Not.

Even if what he says is true, you don't really need to say it out loud. Alonso's confidence must have taken a beating.

Contributor
cider_and_toast I think the high profile nature of the driver has added to the talk and specualtion. I'd suggest if this had been Rio Hyranto the headline would have been "Stupid Indonesian pay driver crashes" and had a about 3 inches of column space with a comment from Felipe Massa saying "Thats what happens when you bring in pay drivers"

I would also like to point out that after the absolute farce that was qualifying the big honchos around F1 are pushing this "biggest crash ever but driver survives due to how great and safe F1 is" in order to paint F1 in a good light.

The crash is identical to Webber's flight over Kovelinen in Valencia a few years back and there wasn;t this much fuss then.

snowy whilst I agree with it being a near death crash I'd just like to point out that Alonso's crash in Brazil 2003 was probably one of the most irresponsible dangerous pieces of driving I've ever seen in F1
Last edited: 22 March 2016

Rasputin; you got that foil hat on good and tight

Supporter
Mosley comment's are obviously self-aggrandizing. In essence he's saying that he saved Fernando's life. Which is rubbish.

When a car goes airborne it's usually up to luck/chance/fate or whatever you want to call it. Drivers have survived horrific crashes throughout the history of F1. Car design and safety had little to do with their survival.

Although there is no real shot of precisely what happened, Jochen Mass' crash at France 1982 is one of those where you just shake your head and say, how in the hell did he make it!?!

Andyoak said:
Rasputin; you got that foil hat on good and tight


If I was saying the crash was staged then yes it would have been tin foil hat and suite time but this is more F1/Bernie directing its PR on to good things. It happens quite frequently.

Staff Member
Premium Contributor
Let's stay off the subject of Alonso and staged crashes shall we?

Valued Member
I thought Webber got significantly more height than Alonso in his aerial excursion.

Valued Member
But landed the right way up iirc

Supporter
Kubica's wreck in Canada was much, much worse than this one as well.

Actually I found the crash most reminiscent of J Villeneuve's at the same turn three in 2001, which resulted in the death of a marshall hit by flying debris. Which is what I found most worrying because in one of the camera angles of Alonso's crash you could see how close flying debris came to being projected over the safety fence, and there's no telling where they'd have ended up...

Valued Member
To quote Lionel Hutz ""Well, we have hearsay and conjecture...Those are kinds of evidence."

Few days ago I was thinking that max mosely was probably wrong & was more 30/35 yrs ago that someone couldve been seriously injured in that accident not 20 but then yesterday I was watching Eddie Irvine legends of f1 program on sky sports & they showed micheal Schumacher crash that looked like a routine accident (if you can call any crash routine) going straight on feet 1st into Stowe barrier only car damage was front wing was broken & Schumacher had broken leg ruled him out for 4/5 months. Alonso had that accident needs no description barely anything outside of the survival cell that hadnt been ripped off & walked away 1/2hr later was doing media interviews
Last edited: 23 March 2016

Supporter
I cant think of many wrecks with a worse head-on collision than Schumacher had in 1999.

Often the crashes that look the worst aren't as bad as others that look rather innocuous. When cars are shedding bits all over the place the energy is being dissipated and the eventual meeting with the wall shouldn't be as violent.

KekeTheKing said:
I cant think of many wrecks with a worse head-on collision than Schumacher had in 1999.
Click to expand 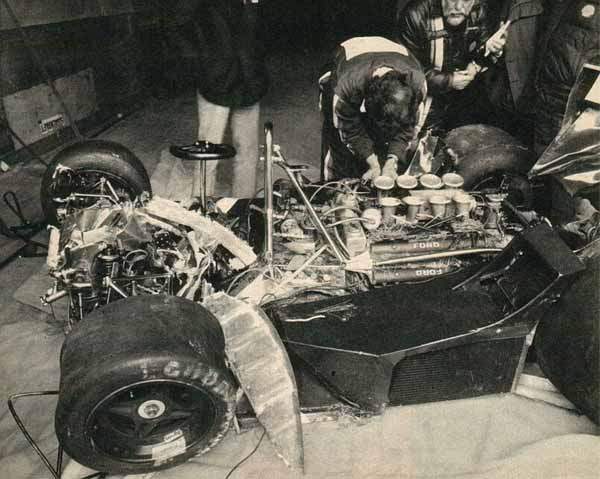 Contributor
Purley? 35g or something, I think.

gethinceri said:
Purley? 35g or something, I think.
Click to expand