Valued Member
I've taken this era as the time from Lotus' new sponsorship and the dawn of the freely DFV up until the retirement of Sir Jackie Stewart.

Considering the last kilometers lead graph from 1958-67 covered nearly double the amount of time, the fact that more constructors lead laps in this time period was instructive:
GRAPH: Kilometers lead 1969-73 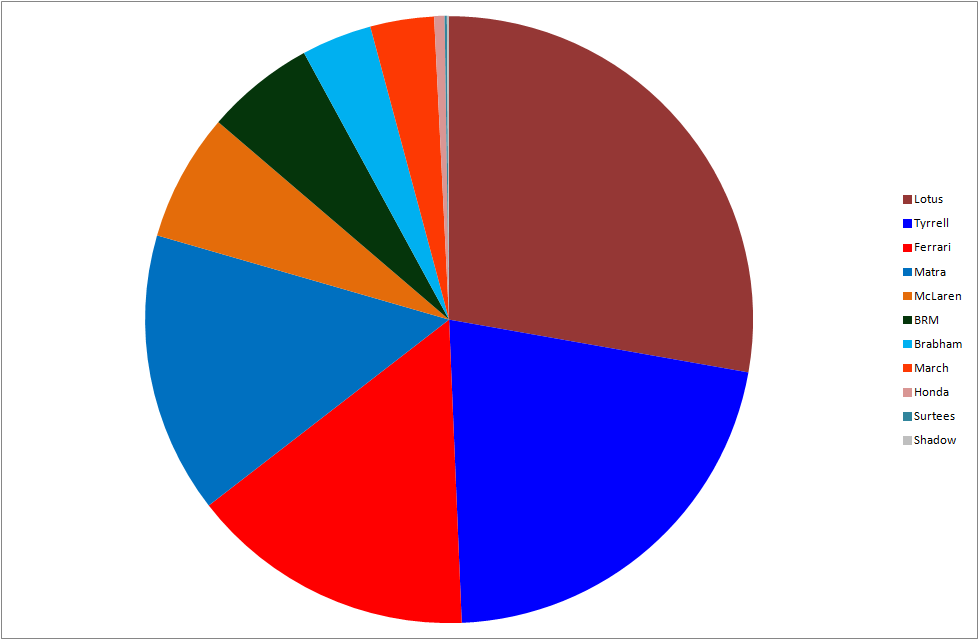 Tyrrell, which was only a constructor for three of these six years, is in second place in the time lead stakes, with Lotus leading. Ferrari is down in third place. Matra's leads were down to Ken Tyrrell's time running it as a customer operation. These years were dominated by Jackie Stewart:
GRAPH: Drivers' wins: 1968-73 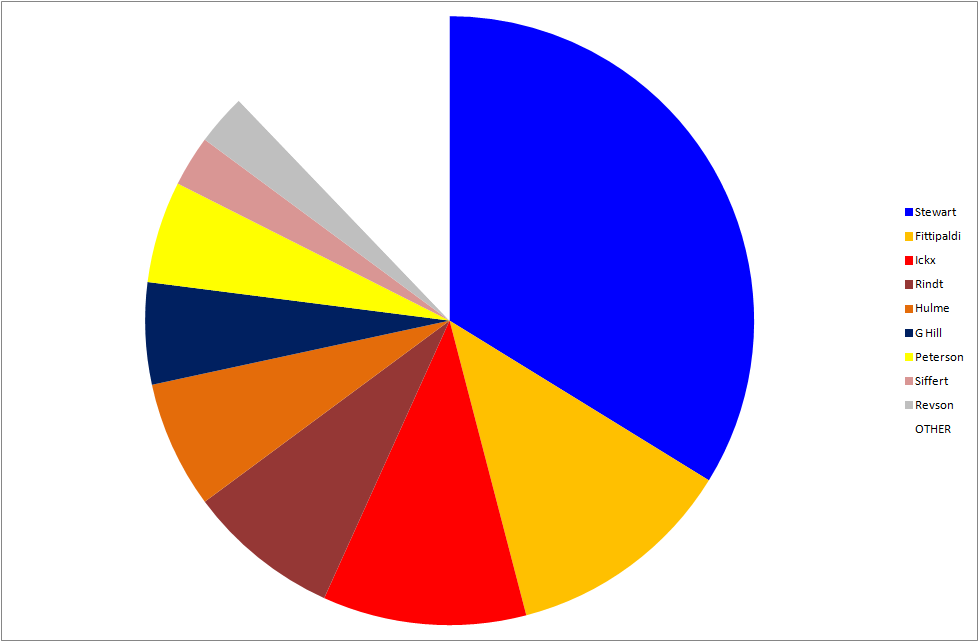 Stewart was a superb driver and became three-time Champion. Fittipaldi is halfway through his short top-level career here before he somewhat wasted his potential in his brother's car.
The era was one of sponsorship. Most of the top teams found themselves in cars painted after their sponsor's colours, with Lotus' red-white-gold cigarette deal the first of many - often, of course, with cigarette companies. But the Ford Cosworth DFV engine, available relatively cheaply and with no exclusivity, was even more dominant!
GRAPH: Best WCC position of teams using three best F1 engines 1968-73 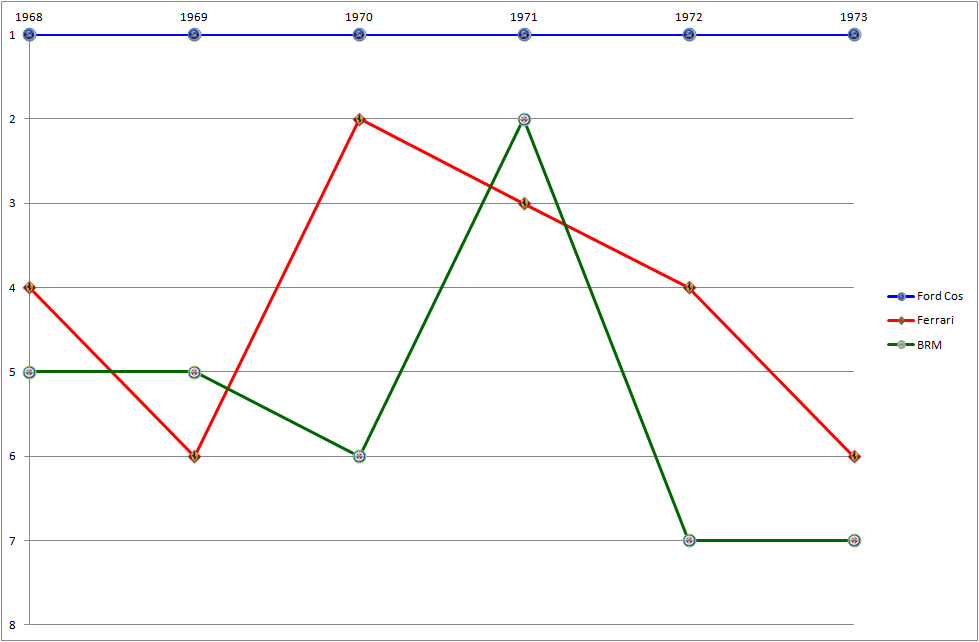 It is worth noting that there are no other engine makers that beat these three in that era, all the gaps above the lowest line are filled in by Ford Cosworth DFV constructors. It was not just the Championships they dominated, but the races too...
GRAPH: Best three engines % race wins 1968-73 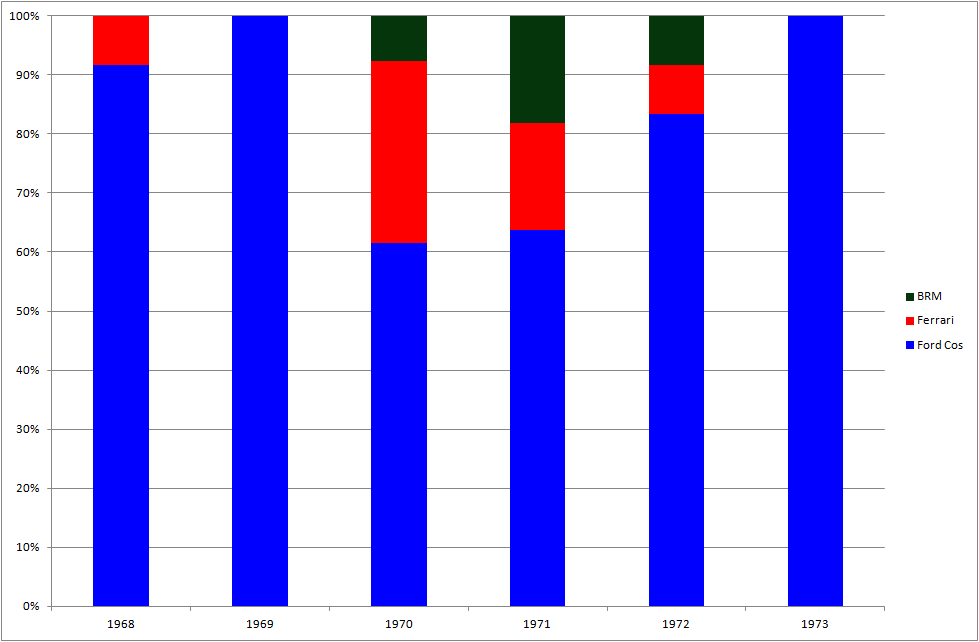 So a time with an engine that gave everyone a chance, regardless of budget. Ferrari not particularly strong, leaving the drivers' title to be won in alternate years - Chapman's Lotus challenger in even years, Jackie Stewart driving for Ken Tyrrell in the odd years. Soon, however, Lotus and a still young Tyrrell team would be challenged before being replaced by the ascendant giants: Ferrari and McLaren, followed by Williams.

Contributor
Unfortunately, for me, this time span is synonomous with driver deaths. Courage, Siffert, Rindt and Cevert all died in F1 cars during this span. And that great Mexican driver, Pedro Rodriguez, one of the masters of the Porsche 917 and a terrific F1 driver, died in a sports car race (in a Ferrari of all things). Rodriguez and Siffert were paired at BRM, so that team lost its two main drivers in a matter of weeks. And of course, Clark, IMHO the greatest of all time, died in an F2 car.

At least this aspect of racing has improved dramatically over the ensuing years (largely due to the efforts of Sir Jackie Stewart).

Contributor
I've still got my dad's old Autocourses for most of these years. I shall have to dig them out. Any questions that might be answered in those books, let me know and I will see what I can find!

Staff Member
Valued Member
Interestingly, while it's often quoted that Lotus introduced sponsored cars to F1 it's actually not the case. The first sponsorship liveryed car to run in F1 was Team Gunston which was a private entry for John Love at the 1968 South African G.P. That was the final race in which Lotus used national colors and the final win for Jim Clark.

Also on the subject of lost drivers, we musn't forget the death of Bruce McLaren in a can-am car.

Contributor
I remember one terrible stretch in 1968 with these deaths:

All were F1 drivers, although most of their deaths weren't in F1 cars.

I imagine that, come August, all of the drivers were apprehensive about the 7th!

Contributor
Brabham had a couple of small winglets at the end of 1967, but this era fits in with the Aero boom. Constructors and drivers who struggled to adapt were left behind. Brabham had a terrible 1968, whereas Stewart and Matra stole a march on the rest helping them to the 1969 title comfortably.

jez101 said:
I've still got my dad's old Autocourses for most of these years. I shall have to dig them out. Any questions that might be answered in those books, let me know and I will see what I can find!
Click to expand

Contributor
Buy them off of you for 29p?