so here we are already in round 11 of an impressive 17 organized by FIA & liberty media, which will be the 4th grand prix of 8 & 2nd circuit of 6 that F1 werent planning on visiting. but then 2020 will always be the year that everyone's best laid plans were chucked out of the window & hastily rearranged. especially as the interesting fact is that liberty almost cancelled as many as we racing at. F1 are going to 14 circuits but cancelled 13

Nurburgring along with Spa & Monza are the most historical circuits in both F1 or General Motorsport. that F1 visits this season. as was built way back in 1927 with Rudolf Caracciola 1 of the greatest pre war drivers. was the 1st winner in a car at the ring in a Mercedes (what ever happened to them

) 2 years later in 1929 it was shortened by 4 miles to the 14mile Nordschleife we still know & raced on today by the public made famous by Top Gear & professionals in the 24hr race & WTCC both since 2015. although you wont be surprised to hear that F1 stopped racing at the Nordschleife, but not wholly because of 1976 horror incident with Niki Lauda as even months before with the increase of TV coverage & rise in safety. the decision was taken that 1976 would be the final race. as it was deemed unrealistic to be able to show the 14 mile circuit on TV & also have the number of Marshalls needed in case of an accident. i wont go into detail about the accident as there better places that will do it justice + a fantastic film about it in 'rush'. but it is interesting how by small margins lives can be transformed. because with the forecast being for rain. Lauda attempted to arrange a boycott of the race, other drivers voted but the "lets race" won by just 1 vote, & the cruel twist of fate is the guy that didnt want to race & encouraged a boycott was the guy that was apart of horrendous crash. fully explains why months after his miraculous recovery. he would rather lose the world championship than race at Fuji. also being at Nürburgring especially in the year of the great underdog performance in Monza with pierre gasly. it would be remis of me to not mention the feel good win of Johnny Herbert win & double podium for Stewart in 1999 . a season where he would only score points 3 times. but history only remembers the win as gasly will learn in decades to come & also it was brilliant for Minardi who held off Eddie Irvine scoring their 1st points for 4 years & penultimate until they left in 2005. (if you dont include the farce that was 6 car indy)

Anyway right to bring us up right to the present, the last visit to Nürburgring in 2013, it was Lewis Hamilton who was on pole for Mercedes (as much as things change, they stay the same) but if we get the same podium next sunday then it will have been extremely eventful race as i highly doubt Vettel, Kimi & Grosjean will be able repeat the feat & for 2020 with the race being in mid October. it will be the latest F1 will have raced in europe since 1984 season & 1997 season when they raced at Estoril & Jerez on 21st & 26th October. but unlike them sunnier climes we are expecting some worse weather. the average October temperature at Nürburgring is 9c & last weeks 24hr race was red flagged for nearly 9 hours because of rainstorm the winner would later describe as “the worst conditions I have experienced”. but it wouldn't be F1 if we expected Bad weather only for it to be bone dry.

The weekend could be very historical because Kimi Raikkonen providing he takes the start on Sunday will break Barrichello record, moving on 323 races. an absolute stalwart of F1. when he debuted in 2001 Michael Schumacher won the Race & competed against Hakkinen, Villeneuve, Alesi, Frentzen & Jos Verstappen. he always win most popular driver award & if you gave him 13th on grid, 6th in the race like his debut he would probably be delighted in his own kimi way & Lewis Hamilton could match the previously unbeatable record of Micheal Schumacher 91 wins. in almost the most perfect place, that you couldnt script any better. because would it be at a "home" race mercedes werent expecting but also at home track of the Schumacher family as circuit is only 45 miles from his birthplace & in would be sad but proud moment in the same way of the infamous press conference when Michael overtook Senna's victory tally. but then im sure this is nothing new as people felt similar when Stewart Overtook fangio, Prost Overtook Stewart & the last time Schumacher overtook Prost way back in spa 2001

also to end on some stats that i couldn't find a place for. but still worth a place

I hope the circuit is a happier hunting ground for Max than dad Jos in all the 7 races he competed in, never finished on the lead lap all he had was 4 DNF's, 13th, 14th & a team that folded that before they got there. to show for it

Only once at this modern Nürburgring. has driver from a country that doesn't have red in their flag won the race. that was Mika Hakkinen in 1998
Click to expand

Contributor
When the race was announced I had a flashback to sitting there one year during FP1 feeling the coldest that I I have ever felt at a motor sport. And that was in the middle of summer.

Staff Member
Premium Contributor
One of the more unusual reasons for a practice to be cancelled. 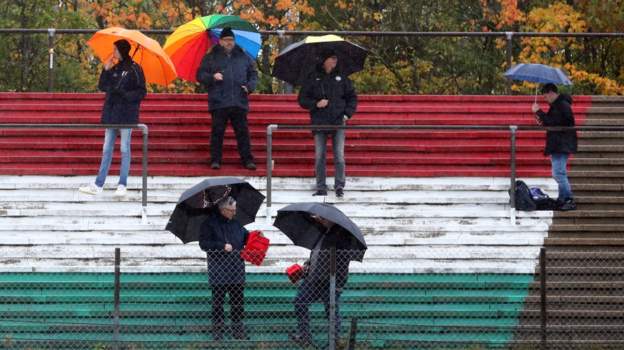 Low cloud forces the cancellation of both Friday practice sessions at the Eifel Grand Prix.

FB said:
I have no issue with the record being broken. I have an issue with the faux excitement that the Sky team insist on creating over trivial records being broken which has devalued the brilliance of what Lewis Hamitlon is going to achieve.
Click to expand

oh yeah ive joked, that hamilton has broken a record every weekend


Johnny Carwash said:
It’s looking a bit pointless at the moment for the teams to have bought slick tyres this weekend.
Click to expand

well we were all looking forward to this. with the latest european race for 23 years, & a average tempature of 9c & it was a possiblity. but we havent had a wet race for a while. i believe styrian qualifying was the only wet session with cars running. since that german GP

cider_and_toast said:
One of the more unusual reasons for a practice to be cancelled.

Low cloud forces the cancellation of both Friday practice sessions at the Eifel Grand Prix.

yeah but according to sky f1, it was that weather was worse at the hospital 45 mins away so helicopter could take off but couldn't reach its destination but also if hospital on flashing blues is reachable with 20mins then helicopter rule can be bypassed

cider_and_toast said:
One of the more unusual reasons for a practice to be cancelled.
Click to expand

Spa 2001 on Saturday morning practice it was given out about no driving due to mist but if it was still misty at qualifying it would go on because of TV requirements.

Titch said:
Why is it called the Eifel GP ?
Click to expand

ted kravitz gave a more in depth answer for this one that i couldnt give before & that ill repeat, appartantly the people that own the hockenheim circuit (similar to the Royal automobile club & silverstone) also have the rights to the name German GP. but in the local restrictions that hockenheim are under its doesnt allow sporting events / large groups. so why we are at the Nürburgring who are with the ADAC so they have named it after the mountain range. same way that if we went to donington or brands instead of silverstone it would likely be the english not the british

at the drivers were keeping occupied 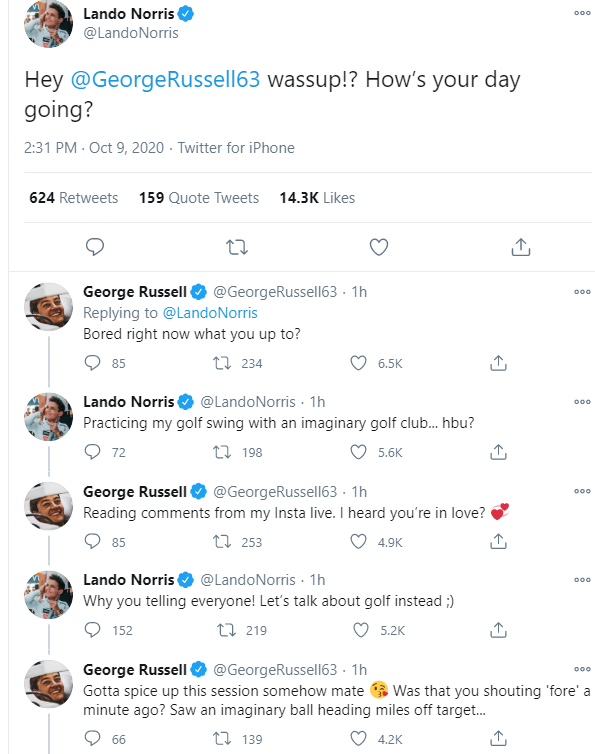 if its hulkenberg like we are all expecting with him in the car park & Racing point wouldve told him before FP3 with the 1hr 30 journey. wouldnt have made sense to keep him as reserve driver as in we wont need you but incase 1 of drivers is too ill or covid. we will need you to drive

The Hulk is back bad luck on Stoffel who misses out.
Last edited: 10 October 2020

nice stat Galahad. im surprised at 1988 i assumed they had because of taking pole in monza 88

fair play to bottas great lap very impressed. but barring unreliability its too little too late for the championship. & but i thought the door was open. its weird because if max was told you'd be 0.03 off Lewis he'd been delighted, but for the surprising lap from bottas. but the star of qualifying is leclerc what a lap but it 4th on the grid, some of the results hes getting in 2020 are rivalling the outstanding debut ferrari season in 2019

nico hulkenberg considering 3 hours before he was having a coffee with a friend. only half second of Q2 considering he had base set up on it. was learning on the hop with the updates.

story of the season 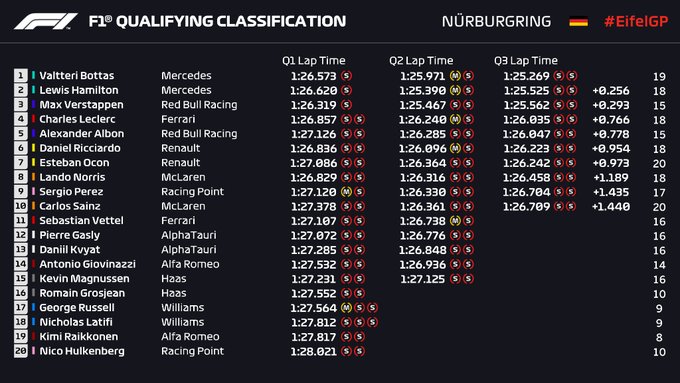 F1Brits_90 said:
story of the season

I guess he must have had the runs

and that is seriously a $hitty moment for him