Like many team owners and principals Frank Williams started life as a driver and mechanic. Realising his ability as a driver wouldn't allow him to reach the levels he hoped Williams set up Frank Williams Racing Cars and in 1969 entered a Brabham chassis for Piers Courage. Through to 1976 Williams entered customer cars from other manufacturers before settings up Williams Grand Prix Engineering in 1977 with Patrick Head.

In 1977 Williams GPE entered a March 761 for Patrick Neve. In 1978 Patrick Head designed his first Williams car, the FW06, driven by Australian Alan Jones The car scored it's first points at the South African Grand Prix and Jones took Williams first podium at Long Beach, finishing 2nd behind Carlos Reutemann in a Ferrari.

In 1979 the FW07 chassis debuted and Williams had grown into a 2 car team with Clay Regazzoni joining Alan Jones. Regazzoni scored Williams first Grand Prix victory at Silverstone and Jones took another 4 victories that season. Continuing with the FW07(in A and B spec) in 1980 Jones, now partnered by Carlos Reutemann, won 6 races (5 for Jones and 1 for Reutemann) with Jones winning the drivers title and Williams the Constructors Championship.

With the FW07 in C & D spec Williams won 4 more races and again took the Constructors Championship in 1981 but missed out on the Drivers Title. Continuing with Cosworth power in 1982 Williams moved onto the FW08, a car originally designed as 6 wheeler, and Keke Rosberg joined Carlos Reutemann. Reutemann retired 2 races into the season and Mario Andretti stood in for a single race before Derek Daly permanently replaced Reutemann. Rosberg only managed a single win at the Swiss Grand Prix 1982 but it was enough for him to win the Drivers Championship.

Having driven for Frank Williams back in 1974 and 1975 Jacques Laffite partnered Keke Rosberg in 1983. Rosberg won the Monaco Grand Prix with Cosworth power and by the end of the season Williams had moved to Honda turbo power and the FW09 chassis. 1984 continued the pattern of 1 win per season for Rosberg and the Williams team with Keke taking first place in Dallas.

Nigel Mansell joined Williams in 1985 and the team, still with Honda turbo engines, won 4 Grand Prix. Piquet replaced Rosberg for 1986 and between them Mansell and Piquet won 9 of the 16 races and Williams the Constructors Championship. 1987 saw another 9 victories for the team and another victory in the Constructors Championship as well as Piquet winning the Drivers Title

The departure of Honda as engine supplier and Piquet as a driver in 1989 saw Williams move temporarily to Judd engines and Mansell, now partnered by Riccardo Patrese, had a very lean season with their highest finish only 4th.

Williams secured Renault V10 power for 1989 and the next 9 season proved to be Williams most successful. They won 63 Grands Prix, 5 Constructors Championship (1992, 93, 94, 96 & 97) and 4 Drivers Titles (Mansell 92, Prost 93, Hill 96 and Villeneuve 97). Other winners for Williams in this period of dominance included Riccardo Patrese, Thierry Boutsen, Heinz Harald Frentzen and David Coulthard. This period was also touched by tragedy when Ayrton Senna lost his life in a Williams car at the San Marino Grand Prix at Imola in 1994

The withdrawal of Renault from F1 in 1998 moved Williams into another barren spell as the cars were powered by ageing Renault engines produced by Mecachrome (98) and Supetec (99).

Williams changed to BMW V10 engines in 2000 and returned to the winners circle in 2001 with Ralf Schumacher and Juan Pablo Montoya at the wheel. The partnership with BMW continued until 2006 with Williams winning 10 Grands Prix and were runners up in the Constructors Championship in 2002 and 2003. Ralph Schumacher drove for Williams for 6 season and was partnered by Alex Zanardi, Jenson Button (debuting in F1 in 2000) and Montoya with Mark Gene and Antonio Pizzonia making occasional appearances as stand in drivers. BMW's final season with Williams saw Mark Webber and Nick Heidfeld taking podiums but able to not challenge for wins.

A season of Cosworth power in 2006, with Mark Webber joined by F1 new boy Nico Rosberg, proved very unsuccessful and in 2007 Williams became customers of Toyota. As one of the few truly independent teams still competing in F1 Williams struggled to compete with the factory supported teams and were probably best categorised as "the best of the rest". Webber left at the end of 2007 and Rosberg, initially partnered by Alex Wurz and then by Toyota "works" driver Kazuki Nakajima, managed a highest finish of 2nd in Singapore 2008 with Williams finishing 4th, 8th and 7th in the Constructors Championship whilst using Toyota power.

In 2009 Williams sold a minority share in the company to an Austrian investment company led by Toto Wolff.

In 2010 Williams returned to Cosworth engines and signed up Rubens Barrichello and Nico Hulkenberg to drive for them. Hulkenberg took a surprising pole in changeable weather conditions in Brazil to give Williams their first such grid position since Nick Heidfeld in 2005. Although regular points finishers Williams weren't challenging for wins and finished the season 6th in Constructors Championship.

2011 sees Rubens Barrichello retain his seat at Williams with GP2 Champion Pastor Maldonado alongside him. They will continue with Cosworth engine power.
Click to expand

Williams have done a shakedown of their 2022 model (with Mercedes gearbox, I believe) - and their car looks very different to most of the other cars that have been released so far:

i really enjoyed the 30th anniversary of beyond the grid with nigel mansell, because i think he is the most the loved british driver because of pay tv now, i dont think any will match the love he had. but even me who thought i knew almost everything about mansell. he still surprised me with some of the things he said. like im reading between the lines, but i got the feeling he has a love hate relationship with frank, in that he adored the man & his time at williams but he often felt disappointed & letdown in the businessman side of him 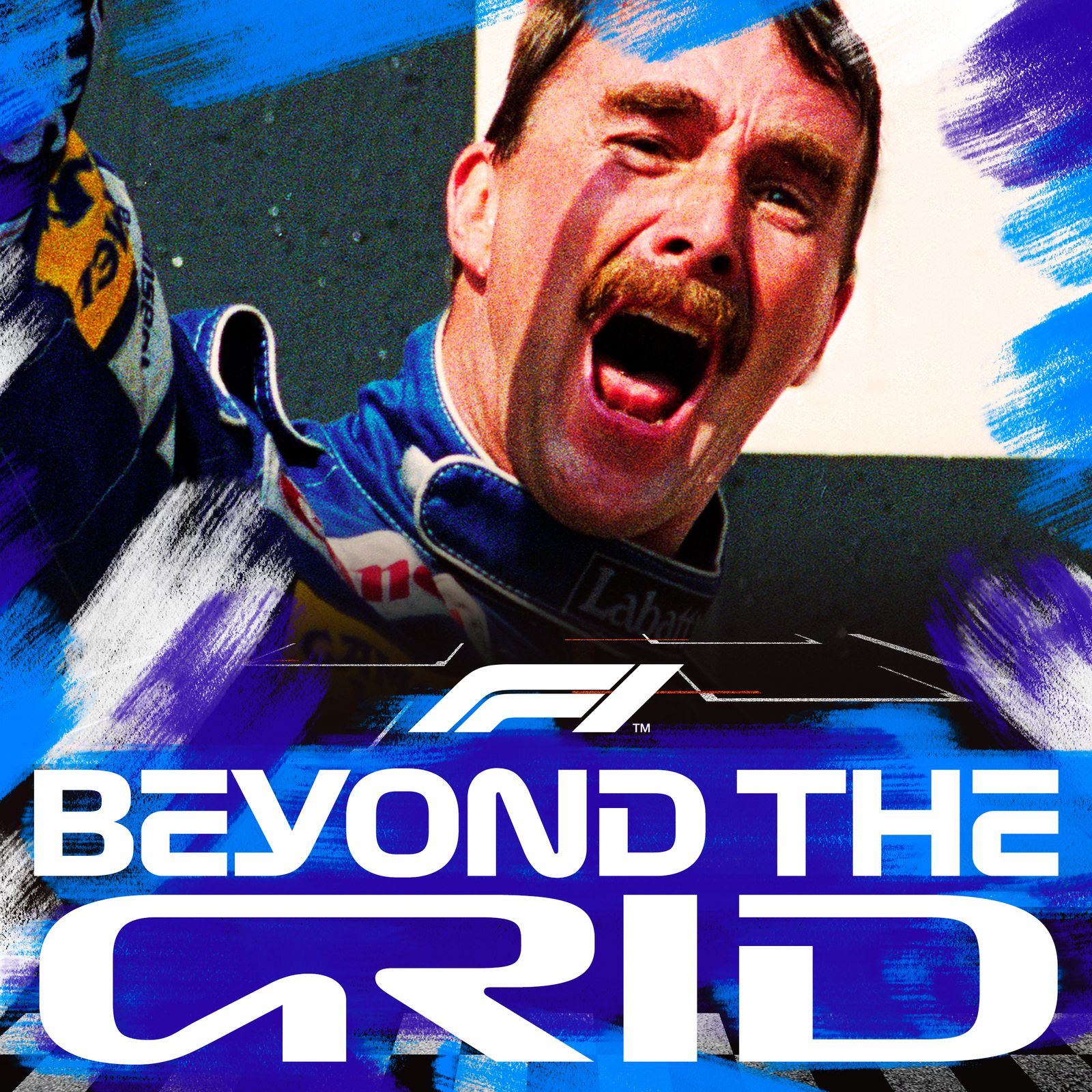 as some of the quotes

Sums up Frank who took no sh1t from anyone. You have to wonder why he did not agree to Honda engines with Mansell and Nakajima for 88.

1995 I remember Mansell told DC he had a contract for 1995 which started DC signing for Mclaren then going to court to say he is a Williams man not Mansell.

Valued Member
It was 30 years ago Nigel, time to move on.

FB said:
It was 30 years ago Nigel, time to move on.
Click to expand

And he never talks about his 1995 title defence.

FB said:
It was 30 years ago Nigel, time to move on.
Click to expand

in his defence it was podcast episode all about 1992 & in his point of view i would upset as well. as if have deal it should be honoured

sports people still hold grudges, i said this to my neice recently who 13ish it sort of blew her mind, i said mention the name maradona to anyone over the age of 45 & see what response you get 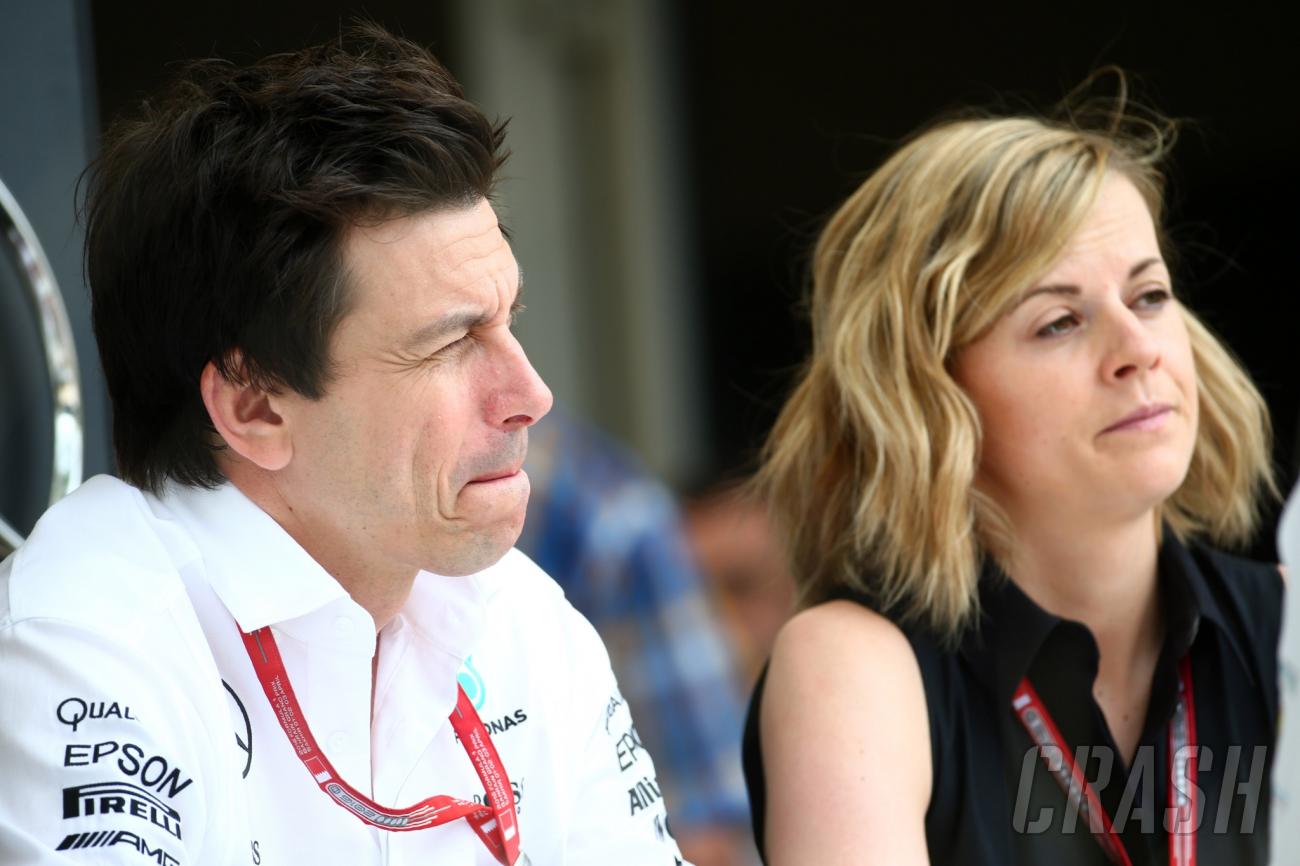 Toto Wolff believes that his wife, Susie Wolff, deserved to drive in F1 for Williams but she never received her chance in place of Felipe Massa.

Meanwhile, the team principal of Mercedes hasn't taken the opportunity to offer an FP1 session, or drive in a new driver event to a female driver. What's his name again?

So, this is Susie Wolff's racing record: 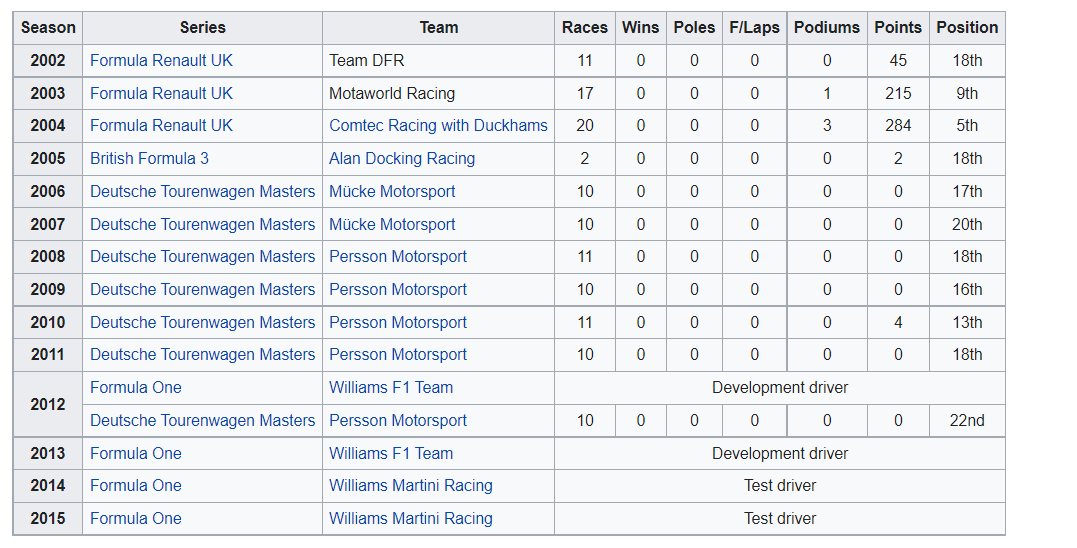 And this is Felipe Massa's 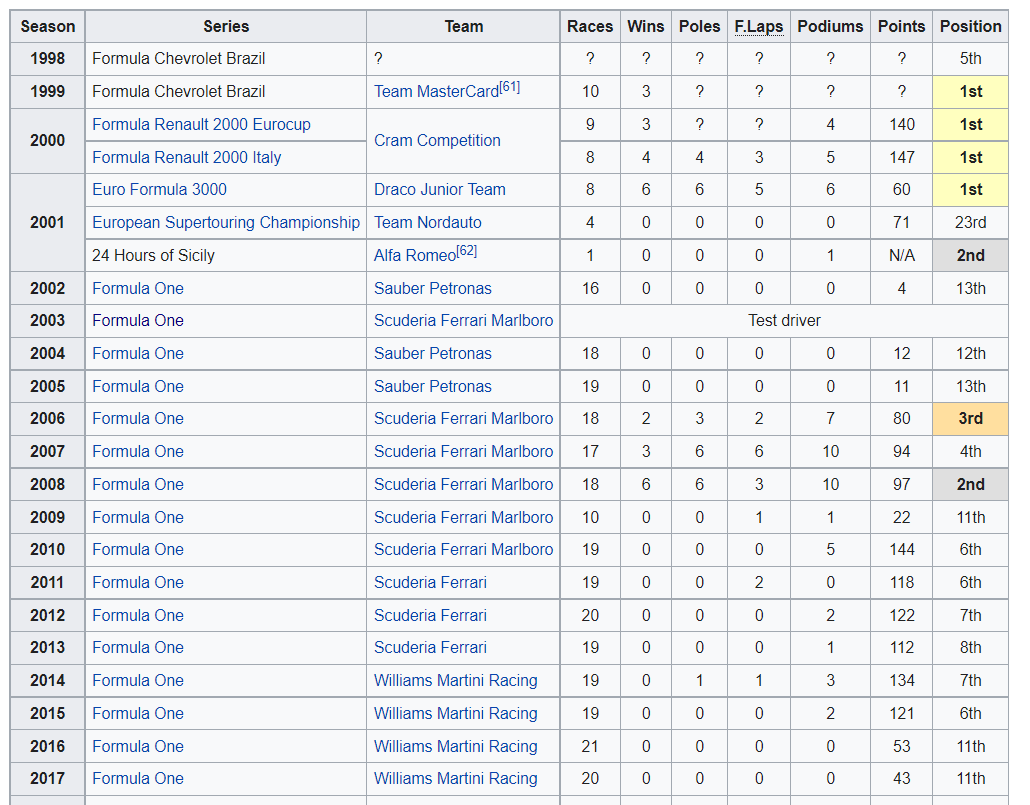 I'm not sure why Williams didn't promote Susie Wolff to the race team in place of Massa.... other than that she wouldn't qualify for a superlicence (of course)...

Well Toto was not going go pi$$ off Lawrence Stroll was he ?