The current debate in the Mark Webber driver's thread had me thinking. In an effort to see just who has been "the best of the number two's" I've looked at the statistics for team mates of the WDC's of the past two decades and distilled those of seven drivers into a table. The seven were all team mates during at least one season when their No.1 took the WDC and are themselves F1 race winners. I've left out points due to the changes to the scoring system over the period. The relative positions in the WDC are good enough reference for this I think.

Here are some thoughts:

Mark Webber has just finished his F1 career having been in the top 6 for five years running. In three of those five seasons he was 3rd in the WDC including 2013, his final season. Prior to 2009 though he had been out of the top 10 for the previous three seasons and only in the top 10 twice in the four seasons before that. Statistically, as a driver, he has had a strong finish to his F1 career.

Felipe Massa as we know is now reborn as a team leader! Out of the top 10 in 2009, 8th in the WDC is his lowest ranking in the last four years. Having bounced back to a 6th and 6th "temporary plateau", he slid gracefully back to 7th and then to this year's 8th. One hopes he can start climbing back up. I'm not sure I should have included Felipe on this list because he's still in F1 with a chance of turning things around. The deciding factor was due to his being team mate to Kimi in 2007!

Heinz-Harald Frentzen's last five years in F1 career saw him 3rd in the 1999 WDC, 9th in 2000 and out of the top 10 for all if his last three years in F1. In the 1997 WDC, Michael Schumacher's antics in Jerez cost him all of his points for the season elevating H-H to 2nd in the WDC.

Jacques Villeneuve's F1 career was pretty well back to front and a fine example of a driver with some talent sat in the wrong car. 2nd in the WDC in his rookie season, WDC in his second and then fell like a stone. Well not quite. 5th in 1998 WDC for Williams (Frentzen was 7th) could have been better maybe. It was his foray with BAR Honda in 1999 with a shocking end to that season in 21st that started the rot. He managed to get into the top 10 (in 7th two years running 2000 to '01) but dropped right out again for his last five years. In terms of the period defined for this exercise JV is the only number two to a concurrent WDC who got a title for himself.

Johnny Herbert – ahem. An also ran but a brave one.

Edit: I have to amend the table to correct a couple of errors. Bear with me I will post it later.

EditL here it is again. If you spot any more errors please let me know 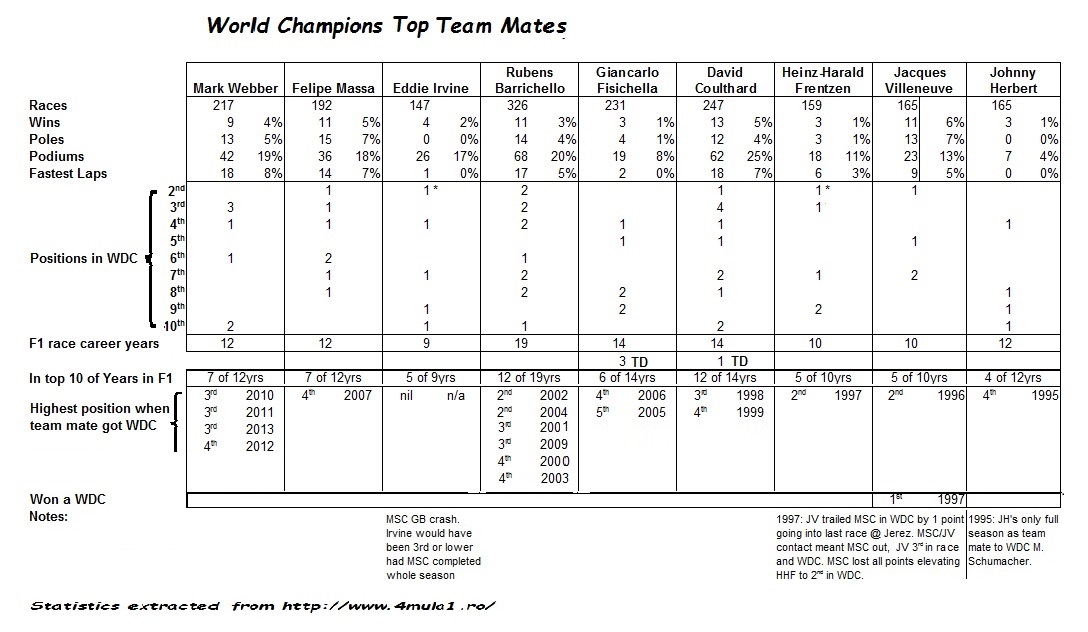 I'm not at all sure I want to discuss WDC "number twos".

Rubinho without a doubt - amazing consistency to come 2nd to 4th in the 6 years his teammate won.

Of course, this simply means he was the second fastest driver in the fastest car, something which matches his ability (a consistent driver without the skills to win a WDC or to beat his team-mate).

Premium Contributor
Rubens ... then Felipe / Webber in a close second ...

In his prime, David Coulthard.

Contributor
Desperately ignoring euphamisms, isn't the best number 2 driver the one who provides the best support to his teammate?

On that basis WDC position on its own doesn't apply.

I would put Rubens down as the best supporting driver, with an honourable mention for Lewis based on the impact the two had on Jensen

I need a proofreader. Things always look different after I've had a kip! My apologies for the poorly worded OP so a quick note:

Gerhard Berger was, I feel, in a higher league (than Webber, Massa, etc) and not a compliant No.2 in the sense of my question. He fought his team mates all the way and his stat's really don't do him justice. I personally think that, like Stirling Moss, he was a great driver who just never got his hands on the title.

Lewis Hamilton is also not in my list - not just because he is not a compliant wingman - but because he hasn't driven to help his team mate win a WDC. I'm not sure I should have included Villeneuve on the list for the same reason as I guess he did try to beat Damon Hill ... hmm ...

Contributor
I thought this thread was about a No 2 being in the same team in which the other driver became world champion in which case Lewis Hamilton doesn't apply as he was team mate to Alonso when Alonso was already world champion the same cannot be said for Damon Hill as Prost got a championship with Damon as teammate and was told not to beat him at France that year even though Damon was much faster than him and he hammered home the point by leading most of the race, putting in faster laps than Prost and finishing about 2 inches behind him over the line..

Coulthard for me but if you bring into play a drivers performance away from F1 I would have to rate Villeneuve. He's the only driver in the modern era to win the Indy 500, viewed by most to be the most difficult race to win.

Valued Member
Why wouldn't you want DC as the number 2? He was very good at getting on the podium, took some points in his own right and even took a title rival out being lapped in the wet

If you leave his mistake in Austria in 1999 aside as well as that car's inability to finish, he was a great wingman for Hakkinen.

Close enough, but far enough away too.

Kewee said:
Coulthard for me but if you bring into play a drivers performance away from F1 I would have to rate Villeneuve. He's the only driver in the modern era to win the Indy 500, viewed by most to be the most difficult race to win.
Click to expand

Would not Moss be on here then well certainly against Fangio

Other No 2 - Riccardo Patrese springs to mind

No. Read the OP and clarifying post only a few posts up.

Also for 1977 when he was teammate to Lauda but Ferrari shameful management to marginalise Lauda for surrendering the title in 1976 meant they engineered Reutemann to be No 1 through supplying new parts ,chassis and tyres first priority despite Lauda leading the championship and being the best driver at the time