Too Many Points Awarded?

Contributor
As far as reliability/less DNFs are concerned, there is one thing I really really don't like. I think it's very disappointing, that there is basically no gravel trap anymore in F1, not even in Brazil or Suzuka, or even Spa...That means that mistakes aren't punished anymore the way they used to be punished...and should be punished in my book...
Don't get me wrong, I know that safety issues make F1 prefer those stupid run off areas, and there's no way I would like to see a driver dead or injured, but considering the fact, that the only two fatal accidents in the last 26 years (Senna/Ratzenberger) had no gravel at all being involved really speaks for its own.
And sometimes I believe that the real reason why gravel traps are abolished is, because they want as many cars in the race as possible for sponsorship reasons, and that is guaranteed with the elimination of gravel traps...
What do you guys think?

Sorry for having gone way off topic here...

Totally agree with you GermanF1

RasputinLives said:
That thought depresses me the most. I'd much rather watch a driver hit the front out of nowhere in a car that could collapse at any min and be rooting for him to hang on to a shock victory than watch someone come 8th every race!
Click to expand

Get some old tapes of Gilles Villeneuve then

I know what you are saying about it being more exciting, but exciting for everyone else = painful to watch for the team.

What is it Al Davis of the Oakland Raiders used to say...? "Just win baby"

Vortex said:
I dunno, I think Ferrari and Mercedes may have risked reliability this season if hey were allowed to push the engines to 110% to try and end Red Bulls dominance.
Click to expand

D'ya think? Mercedes are in F1 to sell road cars and they really don't like seeing one of their machines go up in flames and people talking about "unreliable Mercedeses". Ferrari? Maybe more likely but again, their image is everything. Massa would just have crashed into Lewis anyway, so wouldn't have made any difference to him

They could perhaps make things a bit more random by eliminating car to pit telemetry, fuel guages, rev limiters etc. Maybe then Seb would have broken his gearbox rather than cruised around in Brazil but I think the PR cost of a car failing is a lot higher than the cost of finishing 3rd.

Premium Contributor
I don't really get the arguement that the point system skews the comparision with different eras, just compare how many finishes they had in what positions. Of course things like amount of races, reliability etc. still make a comparison difficult but the changes to the point system can be worked around.

but I think the PR cost of a car failing is a lot higher than the cost of finishing 3rd.
Click to expand


and that's a pretty sad thing...damn all this PR nonsense

Contributor
The reasons why I think that the current points system can be changed are that, in the days of the top 6 only getting points, smaller teams, realistically, had to hope for a crazy race with numerous retirements to even stand a chance of getting anywhere near the hallowed land that is the F1 point. But with the reliability of the cars nowadays, races with ten+ retirements aren't really going to happen. Therefore, if the former 6-point system was implemented these days, Lotus, HRT and Virgin may just as well not turn up. Whilst I take into account the reasons for the abolishment of the current points system put forward by some of my esteemed CTA colleagues, excitement is what we need in races. In the pre-2010 system, there was never really any excitement for a battle for tenth place in a race. Now, however, an extra element of excitement is added to liven up a race battle. Also, the current points system gives drivers in the lower lower half of the field that extra impetus to fight for that higher position, instead of being content to save the car and remain where they are in the race. As for the difficulties of translating the current points system to different ones for the sake of comparing drivers, there have been many weird and wonderful points system of the past, such as dropped scores, and points for pole position and fastest lap. Ans anyway, the difference is nothing patience and a calculator couldn't sort out. Keeping the current points system, in my opinion, attract PR and new teams to F1, because being the sponsor to a point-scoring team sounds a lot more attractive to the public than being the sponsor of a 10th placed team. As for new teams, engine manufacturers and constructors, the prospect of having a rewarding symbol of the hard work to get into F1 without being an established grandee makes the sport a more attractive proposition. A larger points system (with 24 cars, lets not forget) allows newer names to have their moment in the limelight instead of only just Red Bull, Mclaren and Ferrari scoring point most of the time.
Finally, some stats: In 2009, when there were just 20 cars on the grid, the points system was for the top 8, and this represents a 40% chance of scoring points in a given race.
In 2010, with 24 cars, and points down to tenth, this represents a 41.6% chance of scoring points in a race - not a drastic change from 2009. I fear that taking away the incentive of scoring (accessible) points in F1 may contribute towards an exodus of smaller teams from f1.

However, he fails this essay due to no quotations to back up his points

Sorry I am just in a cheesy mood today

Valued Member
The reason there needs to be more points given out is quite clear: 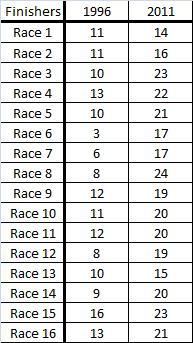 Giving all of the top 10 points in 1996 would result in every driver who finished a Formula One race that season getting points. That includes Lamy, Montermini, Levaggi and even Badoer

! The only entrant who would not take points home would be the two starts, no finishes of Tarso Marques. Just to back that up, 1995 would see points for Magnussen, Wendlinger, Schiatterella, Gachot, Montermini, Inoue, Badoer

, Papis, Diniz, Katayama, Martini and (shockingly) Mansell. Pacific would have scored 10 points to compare with Williams' 5 in 2011.

That would have been a reward for mediocrity, but I don't think that the 2011 situation bears comparison with those kind of sights.

Contributor
Mjo, quote TBY's post, you will get a respectable pass

Contributor
I thought mine was a strong E!

Contributor
I'm happy just as it is.
'If it ain't broke, don't fix it'.


Well they changed it once, so why not again? And I like the one with the 1st and 4th getting most points

Contributor
The thing is the FIA keeps changing the points system whenever it suits them, if they think that one driver is dominating too much they'll change it again. As long as it doesn't go to the medals system that Bernie wanted then i'll always follow F1.

Contributor
No one was dominating it when it was changed to 25 for win, it was to make drivers push for the win rather than settle for 2nd, 3rd, 4th etc.

It's only been changed once when someone was dominating.

Jos the Boss said:
Well they changed it once, so why not again? And I like the one with the 1st and 4th getting most points
Click to expand

Because in reality, it's retarded.

You don't get extra points for finishing 4th in a football league do you?

Things ... Should Vettel be dropped?
2