There's Dark Matter in them there hills!

“They’ve” searched the far reaches of the Universe (well, the sky) for this elusive substance. Nothing in the Universe would exist without it, but we’re not allowed to see it. The trouble, of course, is that dark matter is invisible. It does not reflect or absorb light. It passes through objects as if they were not there. The stuff sounds like it’s a made up theory and, until now, probably was!

Well, after looking far and wide, the elixir of blackness has turned up on Earth in an old mine!
Or, maybe … According to this article in The Guardian today, some chaps in the US have allegedly detected dark matter and will confirm it next year! The particles may have eluded the finest scientific minds for decades, but apparently TWO dark matter particles have been detected in a defunct mine in Minnesota!

So what, I hear you gasp.

Well, Dark Matter could be the biggest scientific breakthrough of the century! It may help to answer such earth shattering questions such as why ordinary matter is not radioactive!
Also, it “may help scientists understand why time – so far as we know – always runs forward.” You know, I’ve always wondered about that…

Seriously though, I think it will further man’s understanding of the Universe. It will answer the question of why visible matter (stars and stuff) only account for about 4% of the mass of the Universe. Scientist’s reckon galaxies would fly apart, without more matter lending their gravity to keep things together.

And, if the Large Hadron Collider can prove the existence of the Higgs Bosun and thus explain why matter has a mass*, then everything in the Universe will be fine and dandy!

I, for one, will be scouring the headlines next year, hoping that they do confirm this discovery. If they do explain why time always runs forwards, they could make it run backwards! I quite fancy rewinding time to replay some aspects of my life...


* Why does matter have a mass? Afterall, everything is made up of the same particles; i.e. protons, neutrons and electrons, which are separated by empty space. Why is a metal so much heavier than, say, a gas like oxygen?

Contributor
What will be novel is my answer phone message:

'Hi, sorry I'm not able to answer your call at the minute, I'm currently travelling through time and will be back last week....'

Staff Member
Premium Contributor
Ok, We've had Bro trying to convince us that a group of Welshman have overcome the laws of Convservation of Energy and now McZ has told us that two particles have been found in a mine in America.

Ok, We've had Bro trying to convince us that a group of Welshman have overcome the laws of Convservation of Energy and now McZ has told us that two particles have been found in a mine in America.

And its not even April 1st yet.

Must be true, it was in the Guardian. Although did some American not claim to have caused nuclear fission in a test tube, but no one has been able to recreate it.

Valued Member
If you want to see some real "dark matter" pop up to Hull on a Friday or Saturday night - there's some very dark matter walking the streets with bottles of Vodka WKD in their hands. In fact, if time travel is your thing Hull is about 20 years behind the rest of the UK so fill your boots.

FB said:
If you want to see some real "dark matter" pop up to Hull on a Friday or Saturday night - there's some very dark matter walking the streets with bottles of Vodka WKD in their hands. In fact, if time travel is your thing Hull is about 20 years behind the rest of the UK so fill your boots.
Click to expand

There's got to be some Phil Brown self-tan joke in there somewhere.

Anyway, we all know the source of dark matter is: 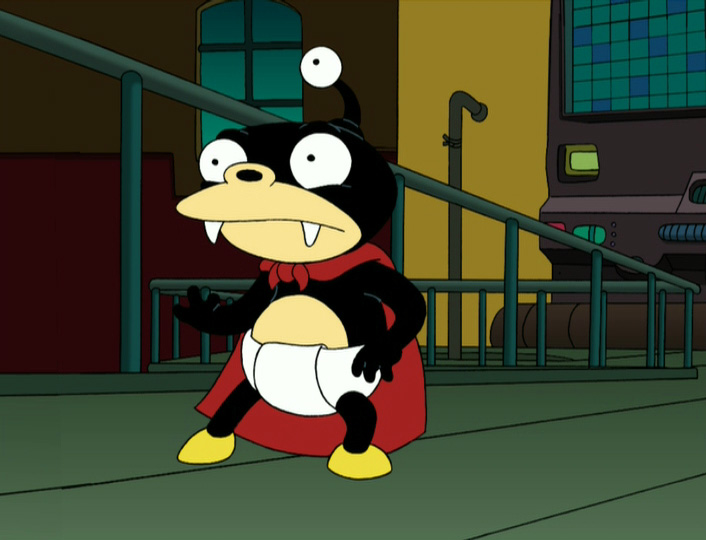 Someone get me the anti-backwards crystal!

Staff Member
I think I'm not alone when I say "Who and what the hell is Nibbler?"

Brogan said:
I think I'm not alone when I say "Who and what the hell is Nibbler?"
Click to expand

You're in good company, Bro!

Valued Member
What a way to flush out those who don't watch Futurama!

From his Wiki page:

Lord Nibbler is a fictional character from the animated television series Futurama. He is voiced by Frank Welker, who provides not only the speaking lines but also the various noises he makes when not speaking English.

During most of the series Nibbler masquerades as an innocent, cute and unintelligent pet. In very rare circumstances he may break his undercover identity and suddenly be discovered to be super intelligent, equipped with unique technology and strange natural abilities, which he uses as part of his secret mission to preserve the existence of the entire universe, though in most instances everyone else's memories of the incidents and his true nature are erased.
Click to expand

Supporter
Back to the matter in hand... matter... get it? ...OK, you can stop laughing now.

According to the BBC, the scientists in search of the elusive dark matter have decided the best way of broadening their search is by burrowing deeper under ground!

Isn't it darker the deeper you go under ground!

Apparently, these there scientist type folk want to burrow deeper under ground, to avoid interstellar jetsam interfering with their instruments.

Though scientists have no idea what it consists of, one popular theory is that dark matter is made up of WIMPs (Weakly Interacting Massive Particles).
Click to expand

Apart from a couple of under ground experiments, NASA are also conducting their own investigation:

Meanwhile, Nasa's Fermi Space Telescope is taking a different approach to try to pin down dark matter. It will look for evidence of dark matter "annihilations" in space.
Click to expand

"These annihilations are thought to occur when two WIMPs collide, generating gamma-rays which can be picked up by detectors such as those on board Fermi."

Prizes for naming the Wimps in question....

Anyway, I'm sure it won't be long before Dark Matter is discovered and we'll all be marvelling at the darkness of it all...

Contributor
Ahh dark matter... That theoretical reason for so many things, why the universe doesn't weigh enough, why the universe keeps expanding. Conveniently undetectable, and used for all things unexplainable.

Still its interesting that they may have found and detected some. As you say a major scientific breakthrough if they have found it, or something like it. I won't be sure until its actually confirmed though. There have been many red herrings in this subject in the past and I can't help but think this is another one.

The Higgs and the LHC is interesting though. If they do not find that after the LHC has ran up to full power, then it does not exist. Why? Because all of the physicists, and the theory say that the LHC has more than enough power to make a Higgs, and will do so if they exist.

In this case, not finding the Higgs would be as important to physics as finding it. Although a lot more work as modern theoretical physics would have to be rewritten.
G

Valued Member
I remember with great amusement one scientist's description of dark matter, and i'm paraphrasing here but the gist of it was 'Dark Matter, a substance with a consistency not that dissimilar to putty - in that it can be shaped in any way you like to plug any given hole'.

As for the higgs boson, as per the oh so accurate calculations of the day the higgs boson should have already been found given the energy levels they have used in tests (they dont like to mention this much). Hence why we are being bombarded with stories that they are 'zeroing in' on the higgs, not because they actually are in any measurable sense, more so because they are running out of possible theories that would still imply its existence.