Valued Member
Does anyone watch it?

I do, as wayyyyy back in 1984 my French teacher, who was an avid cyclist, showed us videos* of the race with French commentary on whilst he counted down the days until his summer holiday, but since then I've been hooked, all through the doping days and the Scumacher Armstrong years of dominance.

A few years ago I cycled up the Col de Tourmalet, I'm never doing that again!!!! it took me 4.5 hours (although we did stop for a very nice lunch with wine and cheese) seeing those chaps practically sprint up that mountain is amazing.

Prologue Time Trial is on today and it all kicks off tomorrow!


*it's a bit like a shit DVD for our younger readers

Contributor
It is my favourite 3 and a bit weeks of the year.
I am touting Schleck and Wiggins for GC and Cav for the Green.

I used to watch it until the period immediately post-Indurain era.
I got fed up after that and gradually became a bit disillusioned with all that ridiculous mallarkey... (do I really need to elaborate on what I'm referring to?...)

Valued Member
For motorsport fans, the TdF is going to Spa tomorrow...

Will Eau Rouge earn you points for the King of the mountain jersey?

Valued Member
Erm... this is the map from the website: 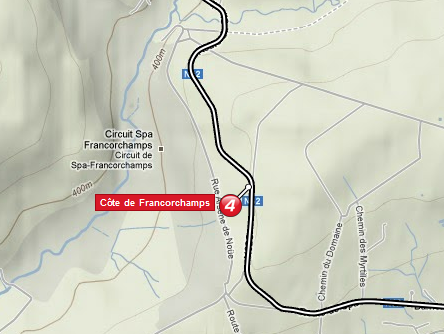 I think the Tour rout passes just East of the actual circuit, although that is the end of a Category 4 climb.

Contributor
Any chance we can avoid posting the name of the stage winner until late evening after the highlights shows on telly? Although I do a lot of "working from home" during Le Tour I'm sure most of us don't/can't watch it live.

Valued Member
I'll Cancellara my plans to do so earlier then, geth.

Contributor
teabagyokel, at the bottom of the picture is the old circuits Les Combes, so it is on the old track for a few bends.

Should we start a CTA Fantasy Cycling Challenge?
http://nbcfantasy.stats.com/cycling/index.asp link to the fantasy game is here, if enough people are interested I will start a CTA group for everyone to join

Supporter
Rough day on The Tour yesterday. 3 riders out with a broken leg, collarbone, and hip respectively.

There's another motorsport connection today as they're racing into Rouen.

Valued Member
Big crash towards the end of the stage today, too. Cat, pigeons.

Valued Member
No categorised climbs at all tomorrow:

Contributor
Yep, a great stage. I love a fragmented peloton (not sure if it's a peloton then) on a hot climb like that, especially early on in the tour. Tomorrow is going to be a ****ing nightmare, great!

Well all you Brits dissapointed by Wimbledon, Euro, and the British Grand Prix need to look no further than the tour. Wiggins looks primed for victory (knock on wood) and Chris Froome (even though he was born in Kenya) sits in third and maybe even looks to have better form than Wiggo. I don't think Cav will get green though, Sagan and Goss are going after all the intermediate sprints and Greipel looks good too.

As an American I have to route for them, and while the Garmin boys have let me down due to some bad luck, Tejay van Garderen has had an exceptional start, and Chris Horner isn't doing too bad for a 40 year old.

I also have an unexplainable tendency to root for all of the pure climbers not named Contador (probably because I'm built like one at 5 foot 7 125 pounds, or 1.70 m and 56.7 kg for all of you non-metric users). This isn't the tour from them but I'm hoping for some stage wins for Schleck, van den Broeck, Rolland, and Vanendert. Still upset with the abandonment of Sanchez though.

Supporter
No mention of le sabotage on Le Tour the other day?!?!?! Cycling hooliganism is the worst!

Good on Wiggins to immediately realize what had happened and to neutralize the race. The same cant be said for Pierre Rolland....