The Tale of Two New Teams

Contributor
Back in the late 90s we saw two almost entirely new outfits assemble on the F1 grid.

For 1997 Jackie Stewart and his son received backing from Ford to put together a brand new project and, in the same year, Ken Tyrells struggling outfit was sold and while much of the technical information and cars were sold to Paul Stoddart, British American Tobacco, a long time F1 sponsor, bought the F1 entry and built a brand new factory and team at Brackley, forming BAR, ready for when they took the reigns for the first time in 1999. 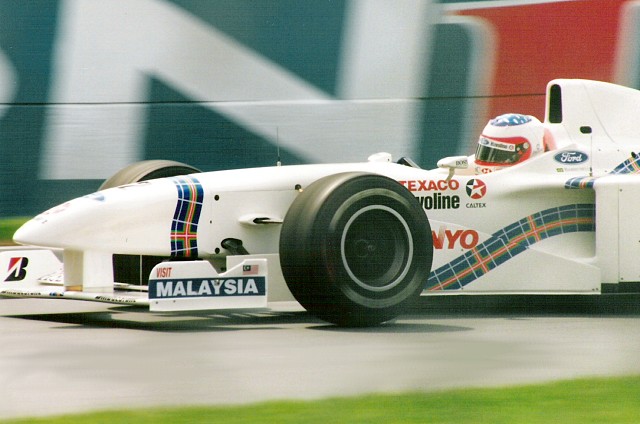 Barrichello picked up 5th place for Stewart at Canada 98 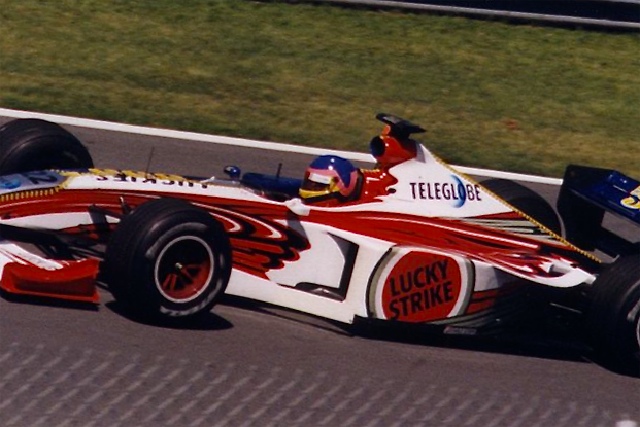 The split personality BAR01 driven by Villeneuve at home in 99

I was a young teenager, still fuming over Williams dropping Hill for 97, but beginning to get excited by McLarens fight back to the front, and of course, my new British hopeful, David Coulthard.

My interest in the sport away from the top teams was admittedly nothing more than to fill the grid slots, but very wisely it turns out, my dad kept on telling me, "keep an eye on those two (BAR and Stewart), they are the teams of the future!" I took note, but could hardly see how they were to achieve this, my heart wanted to believe it, but my head couldn't see how anyone could touch the established top teams. However i had no choice but to take his word because of his absolute belief in his own words. He was adamant. 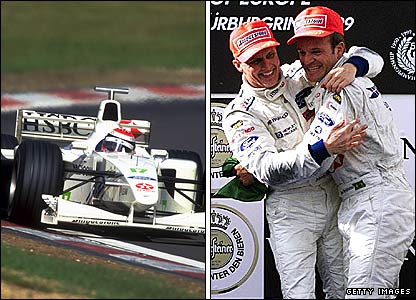 Herbert bought Stewart their only win at Europe in 99. It was a fantastic 1st and 3rd for the team.

Jenson Button, Indy 05. He was to be BARs most succesful driver.


Skip forward just over a decade, investors have come and gone, but Brawn takes the WDC and WCC in '09, immediately followed by RBR doing the same in '10. 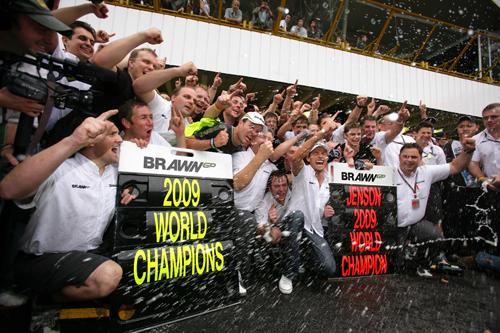 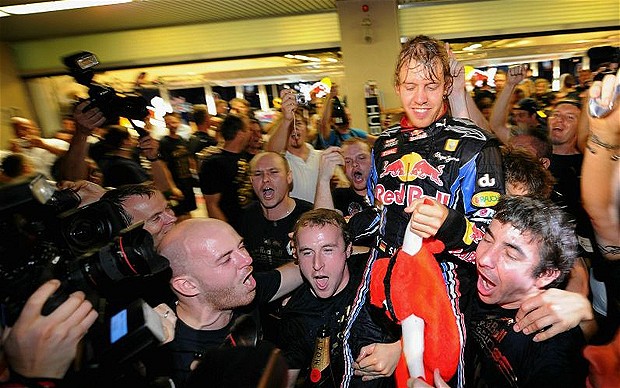 From where do these two teams descend? Stuart, and BAR, of course...

Still at the same bases set-up back in 97, still, i presume, made up of many of the same staff and despite the name on the door, still very much the same teams.

How did you know dad?

There's my exceptionnally brief overview. There is of course a lot more to say about both of these outfits and I'd love to hear from others their views and stories, particularly those that were older, wiser and more aware of the ins and outs of those two new outfits, the politics of the time, your opinions of them at the time etc. Did any of you have the same faith that they would one day be fighting McLaren and Ferrari week after week for example?

Supporter
Stewart always looked like the real deal. The speed with which they got on the pace and the fact that they took a podium in their first season, looked handy in the second, and were a proper upper-midfield team in the third really was testament to just how well Paul Stewart went racing. Things looked good in the transition to Jaguar, but the complex, top-heavy and sluggish management of Ford rather killed any hopes that there might have been of carrying that momentum forward. That was a shame. If Ford had managed to keep Paul Stewart at the helm things might have been different, but his illness rather put paid to that. That a better set of managers and, crucially, leaders, has made RBR what it is today just emphasises the class that was there in waiting thanks to the Stewarts, pere et fils. I always had confidence that Red Bull would come good eventually, and a lot of their early failures can be parked at DC's door, much like he kept parking the cars against the armco.

As for BAR... hmm. They always seemed a bit 'all mouth and no trousers'. One major problem they had is that JV was an awful development driver. It is no coincidence that the first Williams that Damon Hill wasn't involved in was a dog, and when you read about some of the setup decisions that Jaques made over his time in F1 you have got to wonder how it is that he was ever a Champion. I suspect that JV may even have been a better natural driver than his dad, but unfortunately his lack of mechanical sympathy coupled with inflated self-esteem meant that his cars usually handled like pigs. The Honda years... well, what to say? Brawn was a bit of a flash in the pan, and I have to think that a lot of their success was mainly the failings of others. I'll reserve judgement on whether Mercedes has really turned things around until they convincingly win another race.
J

Wow. It is a great story. I knew the past forms of these teams, but i've never looked at them as one team before, but in many ways, as you point out, they are. The names, owners, drivers, executives may change over-time, sometimes yearly, but the heart and the soul of a team is always there somewhere under the layers. I think we'd have to visit their headquarters and meet the staff who have been there from the beginning in order to find it.

Contributor
Not much to add to Pyropes comments.Stewart under Paul Stewart and Jackies influence always looked like a real team, but Jaguar and Fords interference in the team management put paid to that.
BAR remember "A tradition of excellence" from Pollock bit of a joke as they had no tradition.Hmm sounds familiar.
JV was hopeless and the constant war between him, Dave Richards and Pollock JV's manager hardly helped.
Honda's corporate management style ruined any chances that they might have had and even Ross Brawn couldn't do much at that time.
But it should be remembered that Brawn 001 which won the WDC and WCC in 2009 was in reality a Honda.
J

Yeah. Honda made a fantastic car and then pulled out. If the car wasn't so good Brawn probably wouldn't have rescued the team. Wonder how much Honda now regret their decision, even if it was a necessary one in the economic climate.

johnnoble1990 said:
Yeah. Honda made a fantastic car and then pulled out. If the car wasn't so good Brawn probably wouldn't have rescued the team. Wonder how much Honda now regret their decision, even if it was a necessary one in the economic climate.
Click to expand

I doubt the people in Honda ie The Board of Directors have given it another thought.They simply look a the accounts and see a saving of several million pounds a year.
J

"A Honda Director is someone who knows the price of everything and the value of nothing.”

Contributor
I assume that you are director of a multi million dollar international company in that case.

Valued Member
Stewart were almost more than upper-midfield in 1999, Barrichello was often in the top 6 of the McLarens, the Ferraris and Frentzen.

Neither Barrichello or Frentzen ever showed anything like 1999 form ever again, sadly!

What makes a car a Honda? In me old motorbiking days we wouldn't have called the Brawn a Honda. We'd 'ave called it a Merconda or a Hondedes or a ..... but, I wonder, how much actual 'Honda' was there in Brackley? As to Honda's credentials as a company I think their history in motorsport, particularly motorcycle sport, speaks for itself. Had there not been the economic disaster facing the motor industry Honda may well have got back to the top .... but there's that damned 'if' again.

Contributor
I had expected great things from Jaguar but they failed for many reasons. First, they depended on Eddie Irvine to be lead driver. While Eddie had considerable racing ability, he seemed to totally lack car development ability, shown by his 1999 year. Ferrari performance showed a precipitous slide while MS was injured, although Eddie managed to stay in the hunt. It was only after MS returned that the Ferrari car seemed to improve.

Ford, being a huge Corporation, was too fond of multi-layered management. They had Rahal as team manager, reporting to Lauda, who reported to the head of Ford sport. Too much inertia resulted. Rahal was smart enough to attempt to hire Newey, the deal fell apart and Rahal took the blame (whether deservedly or so I don't know) and was sacrificed. That left Lauda, who had never run a team before, in charge (nominally). I suspect he was more figurehead than actual manager and the decisions were being made higher up. Racing, like war, is an area where too much delay in decision-making can prove catastrophic, and that was the end result at Jaguar.

They [Ford] didn't stick at it for very long did they? Seems to me they never really had the necessary enthusiasm.