The God Particle, or, When Particles Collide!


Brogan said:
Just before we all fold in on ourselves and disappear up our own black holes...

If you want to see the news, you'll have to be quick!

And once again the LHC will be forced to shut down while extended repair work is carried out.

I wonder if it really is a good idea after all?

Did anyone feel anything?!

Could be because it wasn't powerful enough.

Apparently, we'll have to wait months for any results and even then, the really big collisions won't happen until CERN has been shut down for about a year, repaired and then restarted again. It will then start the 14 TeV collisions.

So, we all have about a year left then...

This video may go some way to explain the problems that the Large Hadron Collider has had.
Watch closely and a clue to the LHC's issues will become clear...

So, has anyone seen any aliens?

EDIT: I'm afraid the download is very slow. Sorry! I would have posted a faster link by choice, however most links I've
found have been deleted!

Therefore, I seriously recommend persevering with it and wait for this link to download. Seriously...


A leading physicist said:
The Large Hadron Collider could soon begin a search for new sub-atomic particles
Click to expand

I thought they were doing that already!

Apparently, the LHC is made up of different experiments... makes sense!

LHC DETECTORS
CMS - Multi-purpose detector which will search for new physics, including the Higgs boson
Atlas - Similar scientific goals to CMS; will explore nature of fundamental matter and forces
Alice - Will re-create a liquid state of matter which existed just after the Big Bang
LHCb - Detector is designed to answer a specific question: where did all the anti-matter go?
Totem - Will measure the size of protons and how they scatter, among other things
LHCf - Will simulate cosmic rays, naturally occurring charged particles from outer space

OK, it may not be the Higgs boson (for definition of the Higgs boson, see the opening post of this thread), but apparently the LHC has "seen several candidates for the heaviest elementary particle known to science".

The close coupling of the charged Higgs to the top quark means that, if the Higgs boson is heavier than the top quark, it might reveal itself by decaying into a top quark and another particle known as a b-quark.

If the Higgs is lighter, then the top quark might decay into a Higgs and a b-quark.
Click to expand

To read up on this, please view this BBC article. >> clickometry <<

So, it seems that the LHC at Cern is only a few collisions away from discovering the elusive Higgs boson! Allegedly... You just never can tell, with these undiscovered theoretical particles, can you?! Bloomin' things, stay out of sight, do their utmost not be found. Almost as bad as dark matter...!

Oh well, we'll just have to wait and see, I suppose...

Staff Member
Re: Gods Particle, or, When Particles Collide!

I wonder how many of them have been called back for a 2nd time...

Hahah…
I've really enjoyed this read but, just for fun, I'm going to find fault with your logic: "Since this would be the first occasion…"

- If you accept the premise that time travel may at least be possible, how do you conclude that this would be "the first occasion"?

Hahah…
I've really enjoyed this read but, just for fun, I'm going to find fault with your logic: "Since this would be the first occasion…"

- If you accept the premise that time travel may at least be possible, how do you conclude that this would be "the first occasion"?
Click to expand

Hypothetically, if the collisions at Cern create a mini-blackhole and it can be stabilised (stopped from evaporating) this creates the possibility that another blackhole can be "connected" to it and so creating a wormhole. Blackholes warp space/time, so two would warp space to a degree that they could create a shortcut, like this

If (and it's a pretty big IF) some-one could traverse the wormhole, then:

The theory of general relativity predicts that if traversable wormholes exist, they could allow time travel.[12] This would be accomplished by accelerating one end of the wormhole to a high velocity relative to the other, and then sometime later bringing it back; relativistic time dilation would result in the accelerated wormhole mouth aging less than the stationary one as seen by an external observer, similar to what is seen in the twin paradox. However, time connects differently through the wormhole than outside it, so that synchronized clocks at each mouth will remain synchronized to someone travelling through the wormhole itself, no matter how the mouths move around.[17] This means that anything which entered the accelerated wormhole mouth would exit the stationary one at a point in time prior to its entry.
Click to expand

The answer to your question "how do I conclude that this would be the first occasion?", is this:

Wormholes connect two points in spacetime, which means that they would in principle allow travel in time, as well as in space. In 1988, Morris, Thorne and Yurtsever worked out explicitly how to convert a wormhole traversing space into one traversing time.[12] However, according to general relativity it would not be possible to use a wormhole to travel back to a time earlier than when the wormhole was first converted into a time machine by accelerating one of its two mouths.[13]
Click to expand

(Both quotes in the above panels are taken from this Wiki page > http://en.wikipedia.org/wiki/Wormhole)

All this is making my brain hurt!

urrender So, if you'll excuse me, I'm off to lie down in a darkened room!

Staff Member
So time travel back to the past in the future will only be possible back to the time the first wormhole was created?

Presumably it's done the other way around, ie, travelling back to a known point rather than forward to an unknowable one.

Either that or you get the Delorean out and check.

However, you then accelerate the London mouth to just under the speed of light, for a period of time of your choosing, e.g. 10 years.

You then bring that "accelerated mouth" back to the original area of space where you created the wormhole, i.e. back to London. The London mouth, that had been travelling for 10 years, will have aged at a slower rate than the Bristol mouth, which had remained stationary for 10 years.

Therefore, some-one stepping through the Bristol mouth, would in affect step into London in an earlier time-zone.

Ever getting the feeling that my original tongue in cheek comment about time travellers has come back to bite me on the bum!

My earlier point, reinforced by Brogan's here, is that time itself is fluid. This has the immediate implication that no event can be defined solely as possessing a 'moment' in it.

This logically invokes a 'space-time' continuum, which frightened Einstein so much he tried to find ways to avoid its implications, the worst of which is a simple one: If time travel is allowed in nature, in both 'directions', one could theoretically go back in time to kill one's mother.

Supporter
Researchers at Cern, the chaps that brought us the hugely expensive Large Hadron Collider, have said that they expect the Higgs boson to be discovered in the next two years.

BBC article >> LHC "has two years to find the Higgs" 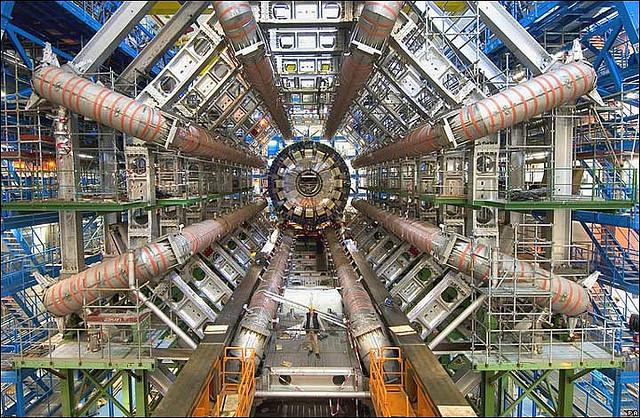 Personally, I reckon that there's an insider, scuppering the companey's chances of finding the Higgs. In fact, here's a photo of him... 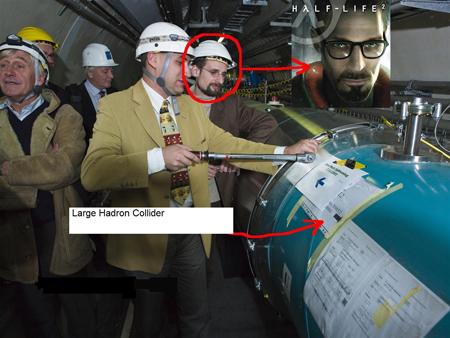 Valued Member
Gossip about a possible announcement on Wednesday.

Valued Member
McZiderRed What is Peter Sutcliffe doing at CERN?

Contributor
Well they were told that if they wanted to get things travelling fast enough they'd need to get the hammer down.

Have they founds higgs ?

Contributor
its on now. I guess the 0900 was CET not BST

Whoooff .. that was the cern webcast going over my head

BBC more at my level

Valued Member
The only thing that crossed my mind about this is that if the Higgs Boson is found and answers the question of what gives matter mass what is the Higgs Boson made up of?