Susie Wolff born 6 December 1982 in Oban is a British racing driver from Scotland. She has progressed through the ranks of motorsport, starting off in karting, then moving up to Formula Renault and Formula Three before moving to the DTM to compete for Mercedes-Benz since 2006. In 2012 she was signed by the Williams Formula One team to work as a development driver and she is still in that role.
She lives in Ermatingen, Switzerland with her husband Toto Wolff, since January 21, 2013, executive director of the Mercedes AMG Petronas Formula One Team. The two were married in October 2011.

Susie is aiming to be the first ever woman since 1976 and Lella Lombardi to race in F1.

Her race record is none to impressive at zero wins, and you would have to say she would not deserve a drive based on that alone. However it is way beyond time that a woman driver should be in F1 and if Susie can open that door which has been closed since 1976 then I say good luck to her and I hope she gets a drive in a decent car. 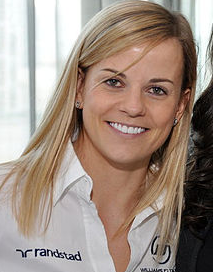 Contributor
Greenlantern101
My box & TV paper ..both have 'Top Gear' in that slot on Sun 24th March?

At the age of 30, you would usually say she was too old to come into F1 as more than a gimick, especially with that record, but with Toto as her husband, it may be a more realistic proposition.

Contributor
Didn't Brabham have a female driver in the 90's?

F1ang-o said:
Greenlantern101
My box & TV paper ..both have 'Top Gear' in that slot on Sun 24th March?
Click to expand


Just checked and it is only BBC Scotland showing it.

It should also pop up on iplayer if all else fails.

RasputinLives said:
Didn't Brabham have a female driver in the 90's?
Click to expand

Yes but she didn't have a race start.

Contributor
Greenlantern101
Thanks for the info..

Contributor
What is going on.

Susie move to the 'drivers' forum, then to 'general motorsport', then to 'F1 discussion'.
I proposed she is now moved to 'personnel', then into 'Off the pit wall' and then back into 'Drivers'

Staff Member
She hasn't participated in a race so can't go in the Drivers forum.
This therefore is the most appropriate forum.

How about "Fast Eye Candy Forum" ?

Should I suggest such a thing? Slightly un-PC I suspect.

Valued Member
Hell will freeze over before Susie Wolff get's into an F1 car in anything approaching a practice session, let alone a race. I'm sure there must be some women drivers out there who can compete with the men in an F1 car but Susie ain't one of 'em.
C

Valued Member
*looks out the window* Ummmm FB are you sure you want to make that statement right now?

Who knows, perhaps if Marussia turn up with Mercedes engines next year then she might be one of the drivers, but it certainly won't be on merit. Saturo Nakajima anyone?

Greenlantern101 said:
Her race record is none to impressive at zero wins, and you would have to say she would not deserve a drive based on that alone. However it is way beyond time that a woman driver should be in F1 and if Susie can open that door which has been closed since 1976 then I say good luck to her and I hope she gets a drive in a decent car.
Click to expand


In what way has the door been closed? Name the female F1 driver during that time who should've got a drive based on ability and didn't.

Isn't it totally sexist to say a woman should get a drive simply for being female despite not having achieved anything like what has been needed in recent years to justify a place in F1?

I'm sure that wasn't your intention, it just seems a little patronising to the girls and I find it irritating that an adequate female driver will get so much more press than a talented male. Nobody would've heard of Sean Wolff.

Contributor
Women drive in practically all other motorsport categories. F1 should be embarrassed by how backward it is. the whole argument of no one is quick enough or fit enough is total rubbish there is much more to it. F1 is a boys club and it needs broken up. If Susie can break it up then maybe some really talented women will be tempted to try and get into the sport.

Unfortunately the journey starts in the lower formulae. Women's access to those levels needs to be sorted out so that enough young women can get the opportunity to mark themselves out for F1. I don't think anyone here is generalising about women not being fit enough or capable especially considering how CTA members responded to what happened to Maria de Villota.

Contributor
My point is there are already women in the highest levels of motorsport. Danica Patrick as one example. None have made the switch to F1.

Interestingly Danica Patrick nearly did but (if memory serves) she and her management decided to continue her career in the States.