Fed up with posting bad news I offer up this. Within the last hour as I write, unmanned spacecraft Rosetta has awoken from its slumber and is now in pursuit of its encounter with a comet. Later this year the probe will, it is hoped, touch down on the comet and begin to analyse the material that it is composed of. The scientists who sent the craft on this most hazardous mission for a robot hope to answer fundamental questions about the universe and our existence in it.

Contributor
I notice whenever scientist send something into space to collect samples somebody always adds the tag line to find out about how we were made or why we are here or some other unanswerable question and when they get the results back they study them for about 5 years and say we may have found this or we may have found that my guess is that this time they will find some dust some rocky stuff and some ice made of either heavy or normal water and this will tell us precisely nothing about anything and Prof Brian will stick his condescending, cheesy, grinning face on the telly and tell us how wonderfully exciting everything is and if you don't believe him you can go and watch something else because your not welcome on his channel...

We must not look at Goblin men?

Contributor
Most exciting space mission since the Mars rovers, really hope it all works. Amazing we know so little about comets.

So much for trying to post a happy thread, eh Mephistopheles ?

Contributor
Sorry about that Fenderman I had a moment....

Strange as it may seem, though, I agree and often feel the need to throw a metaphorical brick at the telly every time the boffins say that. The best example, or worst depending on whether one is a cup half full or cup half empty person, is the hunt for ever smaller atomic particles (or should I be saying quantum these days?). How finding out that matter is composed of small, smaller and yet infinitely smaller bits of every other decreasingly tinier bit of something else in it tells us anything about how it all began, how it is and how it will all end is a ****ing mind boggling mystery to me.

Having said that, of particular interest to me is the question regarding the possibility that comets seed planets with the ingredients for life. If Rosetta casts light on that then the implications of that knowledge for humanity could be very interesting indeed. How will potential proof that life gets dumped on planets by comets affect the mind-set of the social, political and religious establishments that dominate everything that happens on this little rock? A space mission could actually be interesting to us on the outside of theoretical science for a change!

space missions because peep's and robots and stuff really do stuff that's practical like going out there and trying to actually find stuff out that's real ...
Last edited: 20 January 2014
M

Contributor
So lets just assume for one moment that life on earth came from comets lets just take that as a given for now then the boffins will start saying yes that's very interesting and all fine and dandy but where did the seeds of life that are on the comets come from? and if it turns out that it were the comets that gave earth its water where and how did the water get to be on the comets? and this will go on for ever.

I read a science fiction novel years ago I can't remember what it was called or what it was about or even who it was by but there was a paragraph in it that I will never forget where an alien is talking to an earth professor he says something like humans are at the stage in their development where they need to take everything apart and try understand it in the minutest of details, for example look at that tree it is beautiful but you have to take it apart and examine it find out what makes it a tree and in so doing forgetting what it is but eventually you will grow up and realise that it is just a tree and simply appreciate it for its beauty..

And that Fenderman is probably the most profound thing I have ever written on this forum so take note and cherish it because it won't happen again.
Last edited: 20 January 2014

Just so, oh wise one. I wouldn't mind your application of your inherent wisdom somewhat more often in other places. But, hey, my guess is that you enjoy your mischievous, sometimes less wise and often more miserable persona somewhat more.

Contributor
When you consider that these little thinking bags of water, held up with salt, continue to pose such questions as "where do we come from?", and "how does that work?", and "what happens if we do this...?", having only been about for the blink of a cosmological eye, it does stagger the brain somewhat...

Contributor
Well...... I think it's great that Rosetta the Robot woke up. Technologically very clever.

Road of Bones said:
it does stagger the brain somewhat...
Click to expand

It will do so in a very literal sense if one of those ****ers ever get tugged into a collision course with us.

Well it only ever happens every few hundred million years or so, so we are safe for now and... AAAAAAAAAARGHORRAAAH!!!!

Supporter
It will be remarkable for Rosetta to travel closer to a comet than any previous craft, but it will be even more remarkable to land something on the comet.

I love the thought of landing a little robot, called "Philae", on the comet and it hanging on for "dear life" as the comet nears the sun (with the comet coming to life).

Even better, the Rutherford Appleton Laboratory (in the UK) has constructed the blankets that keep the lander warm throughout its mission. I'm glad someone thought of bringing the blankets...

The Open University have also been involved, as part of the UK's contribution, but also Surrey Satellites Technology Ltd. (SSTL) constructed the momentum wheel for the lander. It stabilises the module during the descent and landing phases. http://en.wikipedia.org/wiki/Philae_(spacecraft)
Last edited: 21 January 2014

Contributor
I wonder if sweet Rosetta Robot dreamt whilst she was asleep. Bless her.

Hopefully she'll find something so amazing that it'll spark off a new space race and I'll finally get that Martian holiday home I've always wanted. Would have to be something valuable though. Maybe commets are full of fosil super fuels?
M

If they are Adrian Newey will be the first to stick in his car...

Contributor
Latest image from Rosetta chasing down the comet 67P.
87000km to go.

Should be in orbit August 6th so just over 4 weeks.
Closing speed is only around 90kmph. (55mph) 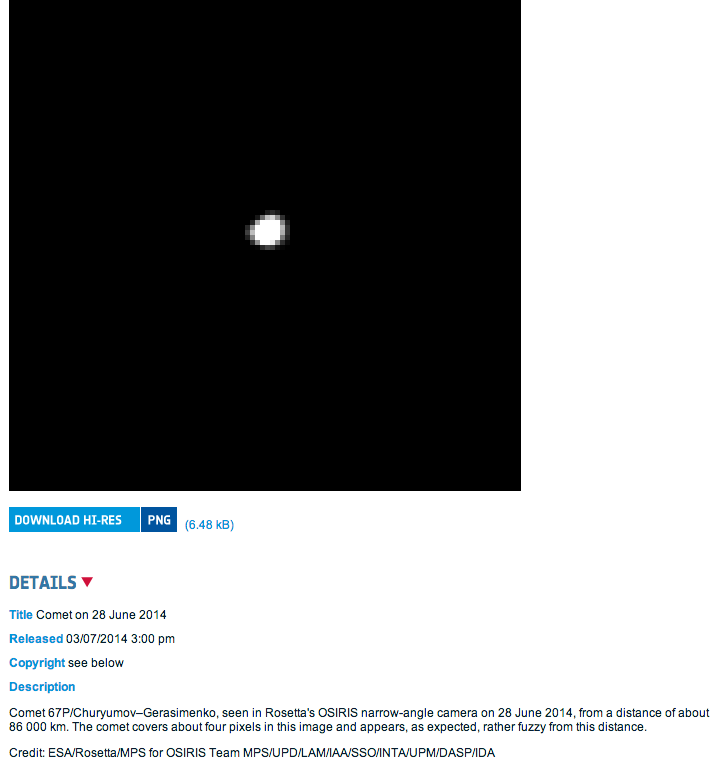 Contributor
This is getting interesting. Is the comet in two pieces? 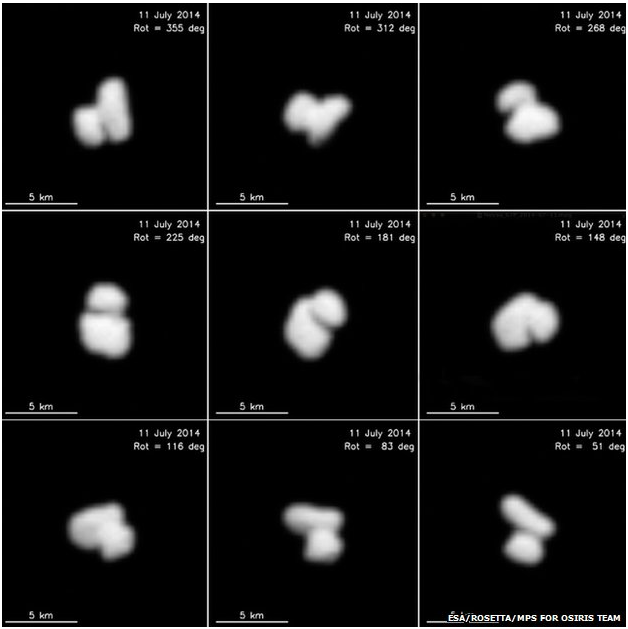 ...or are we in fact looking at two different comets, having in the past gravitationally come together? Which would leave the interesting question of which one to land on, and the even more interesting possibility that double or triple-comets might in fact be the norm in the solar system?
Last edited: 16 July 2014

Contributor
Very belated response to the beauty of a tree anecdote from Mephistopheles above, courtesy of the brilliant Richard Feynman: