Valued Member
... it's the engine.

I was mulling over a comment by Galahad in race chat the other day that the current driver line up is amongst the worst we have seen in recent years. From that I thought I would go off and look at the number of races, number of different winners, different winning constructors and pole winners since the start of the World Championship era in 1950. I have to admit that the early years are skewed by the Indy 500 races included in the Championship and I will go back and remove these at some point.

But, back to the point, we all know that the car has a significant impact on how a driver performs but, similarly, a poor driver (no matter how good the car) is till going to be poor. However, I think what most of us want it competitive racing where the ability of the driver has more of an influence over the result.

My take on the figures I have cobbled together is that the most competitive era in F1 was when the Cosworth engine was used by more teams which had an equalising effect on power. Some cars were better than others but the driver was more able to compensate and the best chassis were closer to one another.

So what's my conclusion? The low points on the graph appear to coincide with significant changes in the engine regulations. So if F1 wants to generate closer, more competitive racing it needs to do something to equalise the engine power which then brings the difference in performance down to how well the designer and the driver can make the car work. This could be either with a period of stability in the engine regulations to allow the manufacturers to catch up or by putting in additional controls to limit the power and power delivery from the motor.

I've attached the graph I pulled out and the spreadsheet should anyone want to play around with the data themselves. 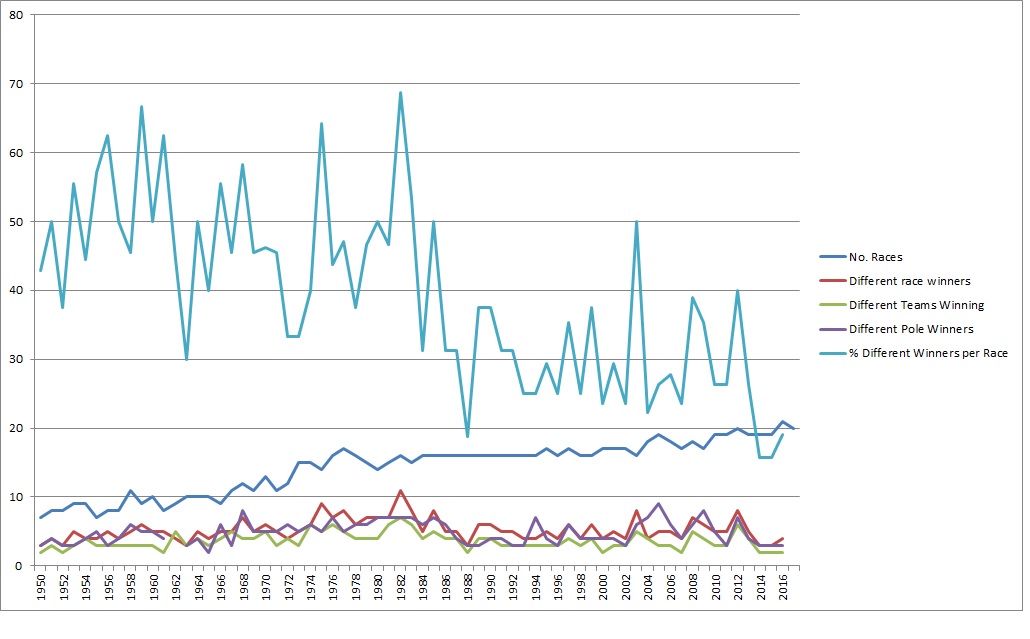 Contributor
Hmmm, certainly one to cogitate on.......
"the current driver line up is amongst the worst we have seen in recent years"
What is meant by recent? Let's say it's since 2000.
What would be a sound means to compare? i find it difficult to pinpoint a driver score per season that isn't influenced by the car, one can't even do it in comparison with team mate.

I shall withdraw and think more, then come up with an unsound, illogical and somewhat cretinous yardstick. which will probably be metric.

Valued Member
An interesting exercise, FB, thank you. The 1974-83 period was undoubtedly the most unpredictable in terms of race wins and championships, with diverse drivers and teams achieving success - almost all powered by Cosworth as you say.

But if you took Fangio out of 1950-57, or Clark out of 1962-67, or Schumacher out of 1992-2006, more teams and drivers would have won in those periods too. The DFV made for a more level playing field, I don't question that at all, but an equal factor was that none of the drivers of the period - Lauda, Hunt, Ickx, Fittipaldi, Andretti, Peterson, Scheckter, Piquet et al - had any kind of significant advantage over his peers. To the extent that many rookies - Laffite, Jarier, Pironi, Rosberg, Patrese - were able to come in and get podiums in very short order.

gethinceri said:
I shall withdraw and think more, then come up with an unsound, illogical and somewhat cretinous yardstick. which will probably be metric.
Click to expand

Excellent, I'm working on one of those of my own. I look forward to comparing yardsticks.

Contributor
The emphasis on 'different' winners, teams, pole winners is an interesting point in itself. Does a weak driver line-up based on these stats equal a poor season? I think not.

Not to take anything away from the depth of investigation and validity of this study, but for instance 1976 only needed two drivers to make it a classic year.

Point being, all I think is needed for an interesting season is two or more competitive teams, some characters amongst the top drivers and some drama. Who cares who came fourth?

Valued Member
I agree, 1988 was one of the most competitive seasons I have watched and without the intervention of Jean-Louis Schlesser McLaren would have had a clean sweep. However, McLaren's dominance that season was just because of the engine.

Valued Member
I will try and update the spreadsheet with engines and weight the number of constructor wins as, taking 1988 as an example, only two constructors won but it was 15:1 McLaren - Ferrari. Four different constructors and four different engines won in 1989.

Here's a peculiar thing, Jonathan Palmer took fastest lap at the Canadian GP in 1989. His one and only and one more than his son is ever likely to get. It was a wet race.

Valued Member
Just as an aside, have you noticed than in the hybrid era none of the customer teams come close to the factory teams apart from Renault? Is this down to the installation of the motor, do the factory teams have engine modes (or other differences) they don't share with their customers, could the fuel play a part or are the customer cars and drivers just so crap there's no way they can win?

Valued Member
Well, Merc are spending more than double what any of their customers is, and Ferrari more than triple. Now I don't think money is the be-all and end-all of success, but as long as those teams are running to a minimum level of efficiency, they should be beating their customers comfortably. Those differentials weren't there if you go back before the mid-1980s and big sponsorship budgets came in.

As far as it goes I think Force India are doing a great job relative to resources.

i think in customer cars. the drivers arent the problem i think they are the people make a difference because you could arguably say there are better drivers in the teams outside big guns as look at Hulkenberg Perez Ocon