Poll Greatest Champion of the 21st Century (to date!)

Valued Member
Now we are into the second decade of the third millennium I thought we could have a poll of who is the greatest Champion. Not many to choose from but a pretty impressive bunch none the less.

So, who is your Champion of Champions?

Contributor
I can't think of any reason not to vote for Schumacher.

Valued Member
Its obviously Schumacher. Here's the scatter graph of wins and poles in the 2000s thus far: 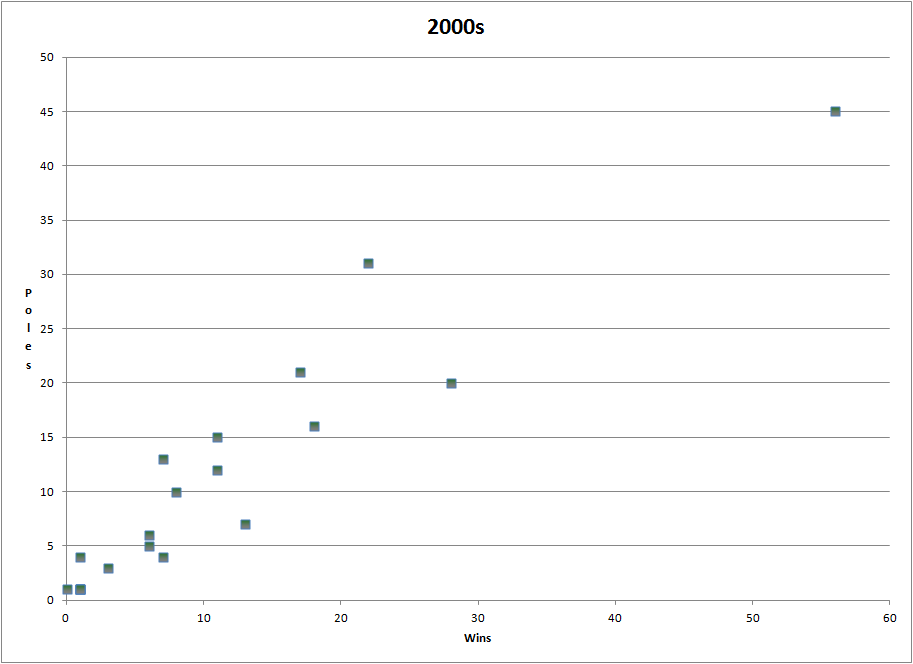 That is Schumacher up there in the top right...

I agree with @tooncheese, I have no reason not no vote for him. Now the more difficult question to answer would be, who's the 2nd best?

Staff Member
It's worth bearing in mind the favoured position in which Ferrari have historically been held by the FIA & FOM, the huge share of the revenue they get (more so than any other team), the fact that the Bridgestone tyres were developed around their car, as well as the technical veto they wielded (still wield?) over other teams, when discussing any achievements related to the team and drivers.

Then of course there was Schumacher's position in the team, with his team mates really not in a position to mount any serious challenge.

Valued Member
Brogan - it is worth discussing this, but I think Schumacher was a major part of this success. His gap to his nearest challenger (Alonso) in this century is 28 wins. That is exactly the amount of wins Alonso has had in his career. Only 5 drivers in history have won 28 Grand Prix - and that is the gap.

Probably given less FIAt behaviour, Schumacher wouldn't be that far clear of the field. But I do believe he would still have been ahead.

Supporter
In contrast to TBY's reasoning, I think the statistical discrepancies in "The Schumacher Era" lend credence to the opinion that no driver has ever enjoyed such a position of technical and mental dominance over the rest of the field and therefore it is hard to unquestionably anoint him the "Champion of Champions" in the 21st century.

I believe every driver on that list would have achieved a similar level of success given the advantages the Ferrari ace held in the Noughties.

If I was pressed relentlessly on this question, I suppose I would select Michael, but I've got my reservations so I've refrained from voting for right now.

I voted Raikkonen because he is the greatest at enjoying life, and in the end thats what really matters. Theyre all millionaires anyways, right?

I have to concur with KekeTheKing. By the same reasoning we may also be "comparing some apples with oranges" since MS is effectively in the twilight of his career, a couple are in the upper middle of theirs - FA and JB perhaps - and others have many seasons ahead of them. I would have phrased the question slightly differently to ask who might turn out to be Champion of the Century. Unfortunately, since I will be pushing up daisies by centuries end, that's probably a question for young folk!

Valued Member
Not many votes for Seb then...

Valued Member
I voted Alonso because he took on Schumacher in the Ferrari when he was still at the top and came out on top, twice. Although in 2005 the Ferrari was never really that much of a threat, but when the Renault wasn't the fastest car he still won (would he have done so if Raikkonnen wasn't breaking down every race is a different question).

Contributor
Voted for Kimi, should have more titles, doesn't care who his team mate is, doesn't moan much, then there's that great comeback where he won the title, and the way he drove the F60 in 2009, when he won the championship no tyre manufacturer was favouring his team unlike Alonso and Schumacher. Hardly caught up in incidents and is gracious in defeat, unlike Alonso in 2010.

That's the reason why I voted him and not the others. Schumacher would get my second vote in the way he grabbed the opportunities the way he did.

Oh, and I forgot to mention the not insignificant fact that there are 87.5 years of racing to go! ... hopefully

Well Schumacher may have had the quickest car but what about 2000? That Mclaren looked strong and in 2003 and in 2006 he would have won it if it weren't for that engine failure in Japan

Contributor
There is no contest is there It is Schumacher one thousand percent he is simply the best driver that has ever donned a crash helmet. love him or hate him the man was and probably still is a genius behind the wheel of an F1 car, his records speak for themselves and his place in history is absolutely assured....

Valued Member
No doubt in my mind at all about Schumacher, even if his brilliance was more obvious/easier to discern in the 1990s.

Contributor
I am ashamed of myself.

Contributor
Jos the Boss, if you're going to give Schumacher his engine failure back then you also have to give Alonso his back as well. In that case Alonso still wins but by a reduced number of points.