Contributor
Several times yesterday the commentators suggested that the drivers may of been unable to see their front wing and are judging by educated guess just how close they are to colliding with an overtaking car.

The incident with Lewis and Schumacher running into the back of cars certainly seems a likely reason (other than running out of talent) that they honestly can't see just how close they are.

This is really a fairly new issue due to the raised nose on the car. Back before noses were stuck in the air the driver could see his entire front wing easily.

I have an idea. So simple, it doesn't involve lowering car noses and redesigning cars.

Put vertical poles on the corners of the front wing, high enough that the drivers can see them. If they all have to have them and it is standardised like the on board camera enclosures then it would be not issue.

This could be implemented within a few races.
A quick fix to an issue that stops us seeing clean racing.

I have (badly) mocked up how it may look. 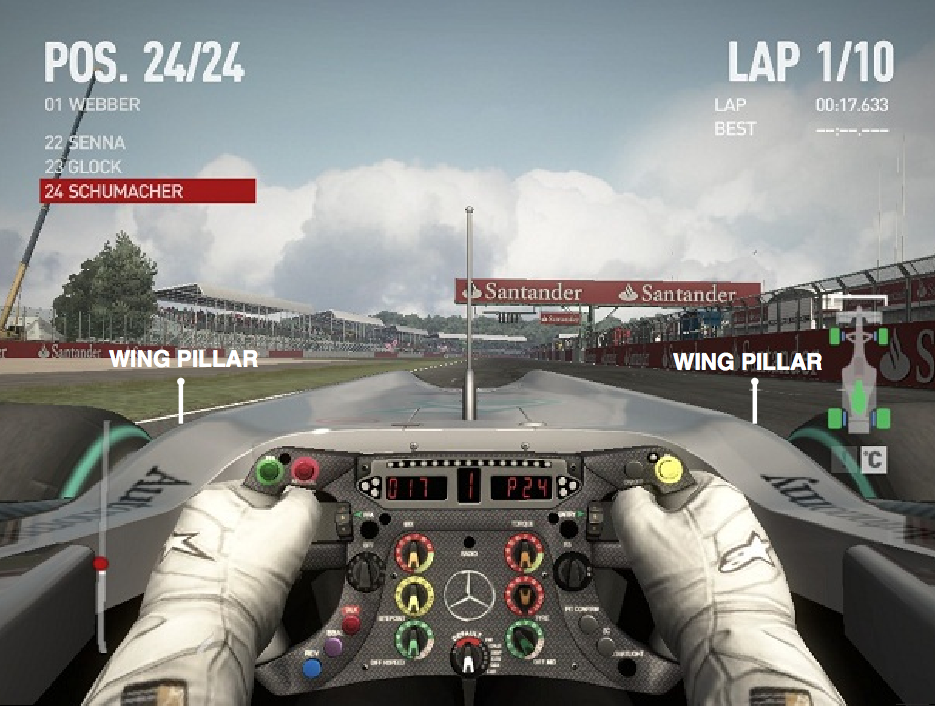 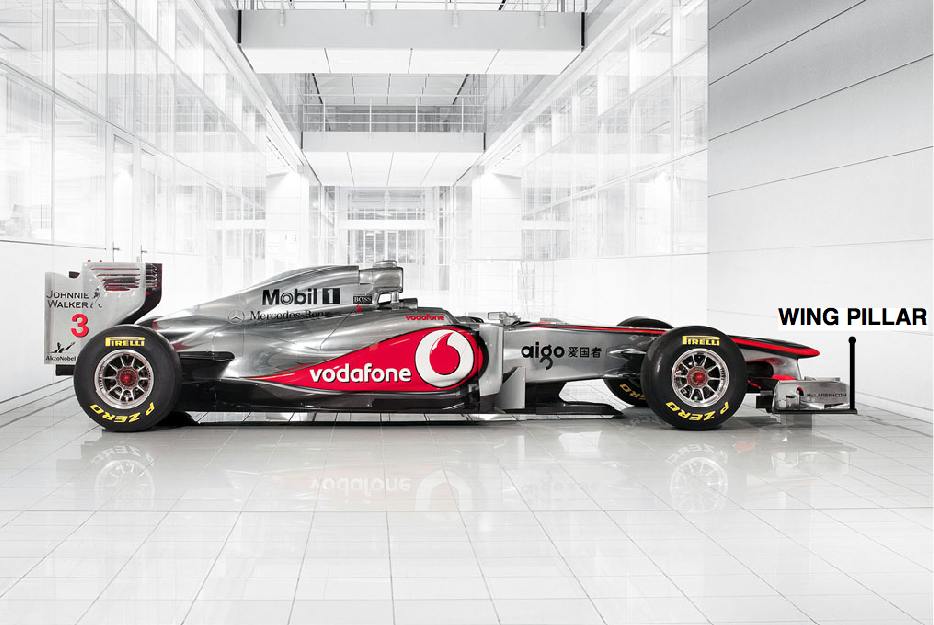 I would say that this is the main issue, I can't see the corners of my car, but I don't drive it into things.

Contributor
Didn't Coulthard or Brundle say that Lewis was having trouble seeing his wing because of the cars ride height? The pilar things look ok but i doubt the FIA would go for them. TBH i think the drivers ride height should be brought up to a level where he can actually see his wing. The drivers sit incredibly low in an F1 car that it's no surprise that we're seeing drivers crash into the back of other cars and wings coming off the cars.

Or could just narrow the front wings back to what they were a couple of seasons ago.

Valued Member
I read somewhere DC questioned Hamilton about how low he sat in the car, presumably to minimise the impact he has on air flow, but he was adamant it wasn't a problem. JB doesn't have the same luxury of sitting as low as he's a couple of inches taller than Lewis.

sobriety said:
I would say that this is the main issue, I can't see the corners of my car, but I don't drive it into things.
Click to expand

Presumably you also aren't doing 200mph and trying to overtake

There have been a couple of occasions when the drivers have seemingly just not realised where their wings are, I remember Brundle commenting about the Ferrari drivers after both of them had front wing clips without a particular reason and it seems that this season more than most it is causing a few issues.

Stunt planes have "sighting rods" or "gauges" protruding from the trailing edges of the wing tips to let the pilot know the angle of the wings relative to the horizon. I would have thought the outer edge of the wings would tell them that, but I'm not a pilot.

Just reduce the wing width (as Vortex says) so they are level with the inside shoulder of the front tyres. The problem seems to have increased since the front wing widths were increased. Lewis Hamilton and Michael Schumacher wouldn't have had their respective altercations with narrower wings - this isn't an excuse, mind you, both are experienced enough to have avoided their respective brain fades......

Dario Resta said:
Just reduce the wing width (as Vortex says) so they are level with the inside shoulder of the front tyres..
Click to expand

I agree that would certainly help, but we are then venturing into redesigning the cars, a much bigger problem for everyone than sticking a sighting rod (good term thanks) on the corner of the front wing.

Also a narrower wing would undo some of the changes implemented to assist overtaking.

In my befuddled mind I'm sure we had the same front wings last year and nothing like the number of wing impacts during overtaking... I'm with Sobriety on this one and Vortex on the longer term solution.

Surely a smaller front wing with the small rear wing will increase reliance on mechanical grip... something many of us have been crying out for.

Contributor
Use those for learner truck drivers in the US.

sportsman said:
Use those for learner truck drivers in the US.
View attachment 2460
Click to expand

Dam n blast ..... I am now tearing up my patent application form.

Contributor
I am sure I read somewhere that they are narrowing the front wings a little in the future, I don't for what season. I hope it does happen, then we won't get silly incidents and the cars look better, right now F1 cars are the opposite of go-karts, wide at the front, narrow at the back.

Which wings? From what season?

Vortex said:
Which wings? From what season?
Click to expand

I don't know. For some reason I had the wings in 2009 mixed up (small front/big rear instead of small rear/big front). Silly me

It will never happen, sponsors want their names to be seen in huge letters.

It will never happen, sponsors want their names to be seen in huge letters.
Click to expand

Well, look at the beautiful (to me anyway, not Keke) B186 to the left.Narrower (although the track is narrower also), single element, but ruddy HUGE Flying Tigers logo. I reckon sponsors would go for that - all those elements and cascade wings make the area available for logos you can see very limited. That car also had a relatively small rear wing, but again with pretty big Benetton logo.

I think a few of today's drivers would be a bit miffed at the lack of downforce though....

I think a few of today's drivers would be a bit miffed at the lack of downforce though....
Click to expand

They're racing drivers. They'll complain but then get down to working out how to handle them. It would mean going less quickly round corners, maybe the rev limit could be done away with to compensate (another hate of mine).

One of the 'side-effects' of the wide front wing has been to give the aero engineers more scope to direct air flows around the front wheels, brakes and suspension. In turn this affects what happens to air flow around the rest of the car. Front downforce can be easily compensated for by increasing size, depth and angles of elements of the wing. However, exposing more of the surface area of the front wheels will increase drag as well as eddies in the airflow in those areas behind the wheels. This may then have a negative effect on the efficiency of the aerodynamic sculpture of the sidepods. It may even affect the efficiency of the intakes to the radiators since the airflow into those will also be disturbed.

How much or how little these effects would be is only known to the boffins, but since the mystique surrounding the Red Bull wing captured the attention of tech heads far and wide, one suspects that this would be no small deal requiring attention to many areas of the design, not just the wing.

Quite frankly, I think it would be easier for the drivers to learn the "space" around their car since they need to do that anyway. I would also suggest that in the main they are aware of that space otherwise there would be far more mayhem at the start of every GP.

Contributor
What about lasers facing upwards that would only be about one foot long.