Fangio how was he so good ?

Contributor
I have been looking at the stats on Fangio and he is by some considerable margin the best driver with regards to wins per race and championships per season. He basically tops all possible stat tables.

Lets take a closer look at that. I find it difficult to believe he was really that much better than greats from other eras such as Schumacher, Senna and Clark. Let me explain.

Fangio completed his first full F1 season in 1950 at the ripe old age of 39, even back then, often the oldest driver on the grid. he retired 8 years later at 47.

To put that into perspective, Coulthard retired at 37 after an accident prone season. Barrichello is currently 38 after spending the last 18 years in F1. Schumacher 7 times WDC is 42 after spending 12 of the last 15 years in F1 and arguably shouldn't of come back.

The point I am trying to make is at 39 years old (never mind 47), like Coulthard and arguably Schumacher and Barrichello was he already to old for modern day F1 ?

Perhaps the reason he did very well was that F1 in 1950 was arguably easier. with around 400BHP per ton, Drum Brakes and no down force. The cars were much much slower in the corners, accelerating and braking. More modern day Touring car performance than F1 performance.

Of course the safety was beyond dangerous and the drivers had a bravery beyond anything needed today. But was driving the cars less physically and mentally demanding?

His age was obviously not a handy cap when he was racing between 1950 and 1958 as he won 5 WDC. So why was he so much better than the much younger competition. Was it because there simply wasn't a large depth of field in racing like we have today, less drivers equals a smaller pool of talent. Was it because it was a sport for the rich and privelaged, in effect a whole field of 'pay' drivers with only average ability.

Then along comes Fangio at 39 years old but still with real talent and ability and dominates the sport for the next 8 years.

I guess the real question I am trying to put is would Fangio at 39 years old be anything like as successful if taken in a time machine to Clarks era or Sennas era or Schumachers era or todays era. Would he still dominate as he did in the 50's ?

Was he really so much better than the other greats?

Well considering there was no other F1 drivers, he would of been the most experienced driver of a road car then, so the adaption would of been easier for him than the younger ones

Valued Member
These are the top 30 oldest Grands Prix by average age of all drivers: 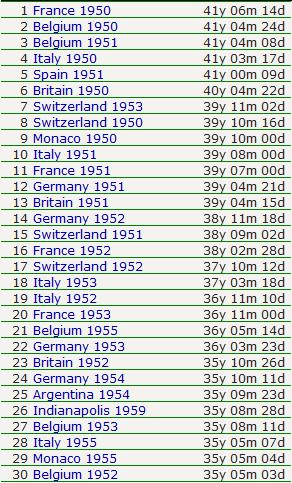 Fangio was by no means often the oldest driver on the grid, in fact he was accompanied by Luigi Fagioli in every race in 1950. Fagioli was older than him.

As to why this happened, it seems clear that a whole generation was not able to get involved in motorsport due to the Second World War. Thus, his "prime" was roughly 1939-45. At which point he was still in Argentina and there was no racing in Europe.

So I believe there are some incongruities in your argument.

Jos the Boss said:
Well considering there was no other F1 drivers, he would of been the most experienced driver of a road car then, so the adaption would of been easier for him than the younger ones
Click to expand

I would like to understand this but so far I can't.

There were more F1 drivers then than there are now. The cars did not suddenly come into being in 1950, only the WDC. GP racing started before the First World War.

In the early days of the WDC there were literally no driver aids. Power steering did not come in until many years later, crash gearboxes were the norm (miss a gear change and the odds were that you had no engine left). Suspension was nowhere near as sophisticated as it is now, the roads were nowhere near as smooth and they either had a grass edge or a proper kerb (hit one of those at high speed and you were lucky to get away with nothing but a broken wheel).

Fangio did so well because he was just very, very fast. The fitness needed was of a differing type, there was more training done in night clubs than in a gym. All sportsmen tended to go on later in life than now, bodies were subjected to different types of stress.

Would Fangio have been a champion if he had been born fifty years later? We don't know, but my guess is that he would have been a multiple WDC.

Valued Member
The whole exercise was so different to what Grand Prix racing consists of now, that any sort of comparison is virtually meaningless.

There wasn't the same strength in depth of driving talent in Fangio's day, that's undoubtedly true. Many of the leading drivers were wealthy amateurs or aristos. Qualification was via chequebook rather than years of training in junior series.

But the races were much longer; the degree of accuracy required, due to the potential consequences of an accident, was greater, as was the need for mechanical sympathy, and the ability to drive around (or even cure) the inevitable minor problems that would afflict the vehicle's speed, but weren't enough to bring it to a halt.

Look at a picture of racing drivers in the 1950s and many of them will appear overweight. Look closer, however, and they are all possessed of broad shoulders, chests and brawny arms. Those cars were far from easy to drive physically, and just because the physiology was different to today (where everyone is thin and short) doesn't mean it was easier.

When today's drivers try out older machinery, as Alonso did at Silverstone this year, their comments are usually full of admiration for their predecessors. How good a tennis player would Fred Perry be now? Ultimately, such questions are meaningless. He beat Stirling Moss, who was a good match for Jim Clark in similar Lotuses several years later. Beyond that, it's very hard to draw a parallel.

Some rate Moss as the greatest driver the UK has ever produced (Murray Walker, I believe, is one such individual...and Murray saw them all race. Clark, Stewart, Mansell, Hamilton. All of them).

I would, however, agree that the depth was lacking...But the depth was also lacking when Senna was killed. Schumacher and Hakkinen were the only drivers worthy of the status of a Fangio/Moss between, say, 1994/5-2001/2.

Fangio was a great driver and probably the best of his era.

He was eighteen when he drove his first motor race in a Ford taxi. At the time motor races in South America were long distance on dirt roads. In 1940 he won the 10,000 kilometres long Gran Premio del Norte - from Buenos Aires, over the Andes to Lima, Peru and back The race took about two weeks and comprised of a series of one day stages. Drivers and/or co-drivers had to carry out their own repairs between each stage as there were no mechanics. Fangio raced many makes of modified American stock cars up until WWII after which he got Argentine government sponsorship to race in Europe and began achieving regular success from 1949 at the age of 37.

As Galahad notes, driving a racing car in the early decades of the sport required a very different but no less respectable physiology. Muscle power and endurance was the order of the day as was tremendous concentration, judgment and feel for the car and road (or dirt track!) surface.

As for his competition, I would suggest that there were probably many forgotten racers who might have given him a closer run for his money in the right equipment. Bear in mind that in those days "Team Orders" were a given and it was not uncommon for a No.2 driver to hand his car over to the No.1 if his broke down.

One should also remember that until recent decades (possibly into this century) the differences between the durability and reliability of the various makes of car were major factors in a drivers' prospects for success. Fangio had either a knack for driving the right car at the right time or just pure luck, but his wins in Alfa Romeo, Maserati, Daimler Benz/Mercedes and Ferrari could be said, arguably, to be in years of domination by those marques.

So, yes, Fangio was a great driver and probably the best of his era, but is it fair to say that he didn't have any serious competition until he got old? I'm not sure about that. They were all heroes in death traps on death tracks. Hats off to all of them.

Valued Member
I don't care what era you're in, 24 wins out of 34 finishes is special. Especially when taking on the likes of Farina, Moss and Collins in the same car at times, and considering how good the 1953 Ferrari was...

teabagyokel said:
I don't care what era you're in, 24 wins out of 34 finishes is special. Especially when taking on the likes of Farina, Moss and Collins...
Click to expand

I was mentioning the guys he was in the same team as, but of course Ascari!

teabagyokel said:
I was mentioning the guys he was in the same team as, but of course Ascari!
Click to expand