F2 season will begin on saturday, i love the series i think a brilliant series, ive seen some quality drivers down the years before they were famous Gasly, Vandoorne, Bird, Leclerc, Russell, Norris, Albon, Schumacher & last years champion Piastri. bar 2021 i always used to say that F2 was becoming the highlight of weekend, because it was often better racing than we had later on in the day, best example was when everyone trashing Baku in 2016, after correctly 1 of the worst races of last decade. but i knew it had to be the cars not the circuit as earlier in the day id seen the arguably the race of the year


thankfully the F2 & F3 championships have now disregarded the new format they brought for last season, meant 2 sprint races & 1 feature races, which was dreadful you never saw who was the best driver for majority of the weekend & made the saturday sprint races almost pointless mainly damage limitation, meant the real pressure was in qualifying & feature race on the sunday & so this season we are back to 1 sprint & 1 feature, we still have to explain why the guy you saw yesterday qualify on pole, is starting 10th in the sprint race. because the Feature will remain on the Sunday for all rounds (bar probably Monaco but with Thursday F1 practise ditched im not sure what going to happen)

Points system has been overhauled this season to increase importance of Feature Race result, Pole Position is now 2 points, reduced from 4 last season. the Top 8 Saturdays Sprint Race, will now have the F1 points system of 2003 - 2009, 10 - 8 - 6 - 5 - 4 - 3 - 2 - 1, Sunday’s Feature Race remains the same as in previous years. The top 10 will use the same Points System as F1 & a point in both races for driver who gets the fastest lap providing they are in the top 10 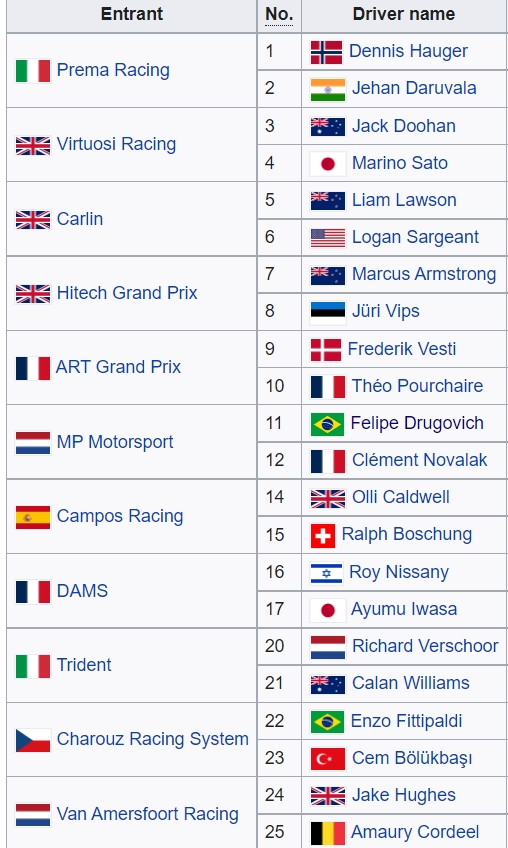 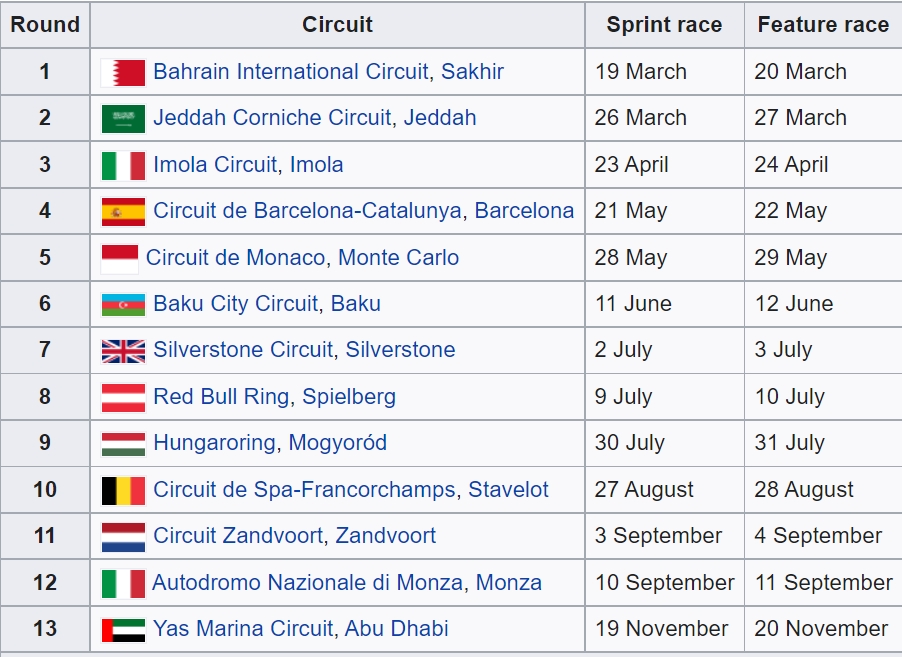 onto the drivers, looks like a wide open series, we have Dennis Hauger will come in with pressure as Ocon, Leclerc, Russell, Piastri have all impressed in either or Both F2 & then F1. left series highly regarded, Jack Doohan looked good in season Finale on his debut & has the famous surname to live up to, Jehan Daruvala, Marcus Armstrong, Roy Nissany, Felipe Drugovich in the last chance saloon, Cem Bölükbaşı will be a fascinating experiment started & has most experience in the esports world but in the last few years he competed in GT4, Asian F3 & Euro Le Mans LMP3 but had only 62 races 35 single seaters but nothing in physical world at the power or level. Theo Pourchaire who will be eyeing up the F2 title have getting the eye of many team Principal following his win in Monaco & looks to be fantastic that could be part of the new generation in 5 years fight for an F1 title

the Sean Galeal award for being the really slow backmarker won in 2019 Mahaveer Raghunathan & then in 2021 Alesso Deledda who managed the impossible to be slower than Raghunathan, Amaury Cordeel hasnt stood on a podium since 2018 but has somehow progressed through F4 F3 & now into F2, after finishing 23rd in F3

finally my predictions, where in 2021 was a huge fluke, it made it seem like i know what i was talking about

, where i got the champion correct & my 3 main contenders where the top 3. in 2022 my ones to watch im going to pick, titles between Jack Doohan & Theo Pourchaire, Dennis Hauger coming 3rd

after the 6 safety cars 2 red flags, a VSC.& an abandoned race because dragged on so long it delayed the drivers parade, in the 3 F2 races last year

we have carried on where they left off. as we currently on lap 13 of 20 & we have had less than 2 laps racing as we had a safety car on opening lap & then restarted lap 7, in mugello 2020 F1 style incident doohan & Sargent crashed before they crossed the line & still under safety car

also leader lost win in some of the oddest scenario

but i think it was very harsh on hauger, he had been penalised enough, if its true that they asked & they said yes. then it terrible, you can only go off what they said. but in the slight defence of FIA. how come 2nd/3rd & 4th etc stayed out & you can see the X 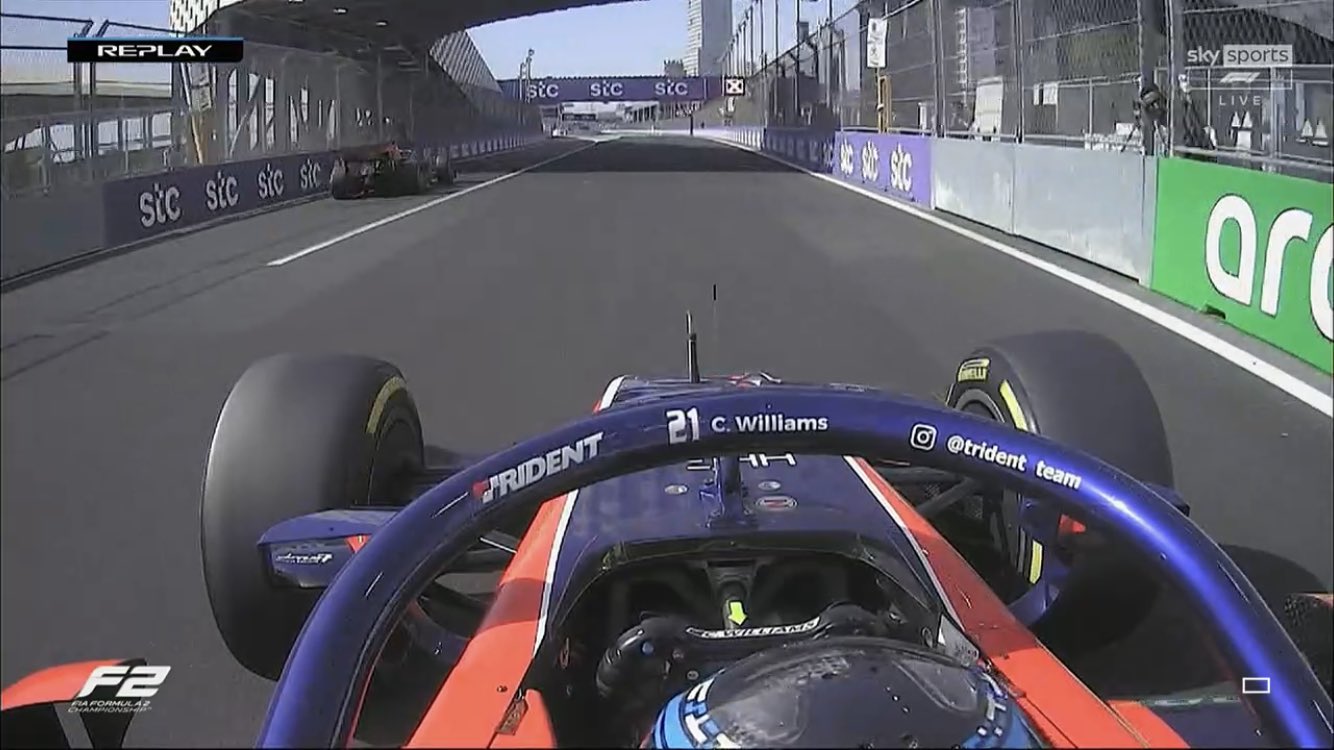 Liam Lawson red bull junior on pole who was chatting with rocky very interestingly post qualifying in his new as head of Junior drivers. from Porchchaire, Iwasa, Vips, Drugovich & Fittipaldi 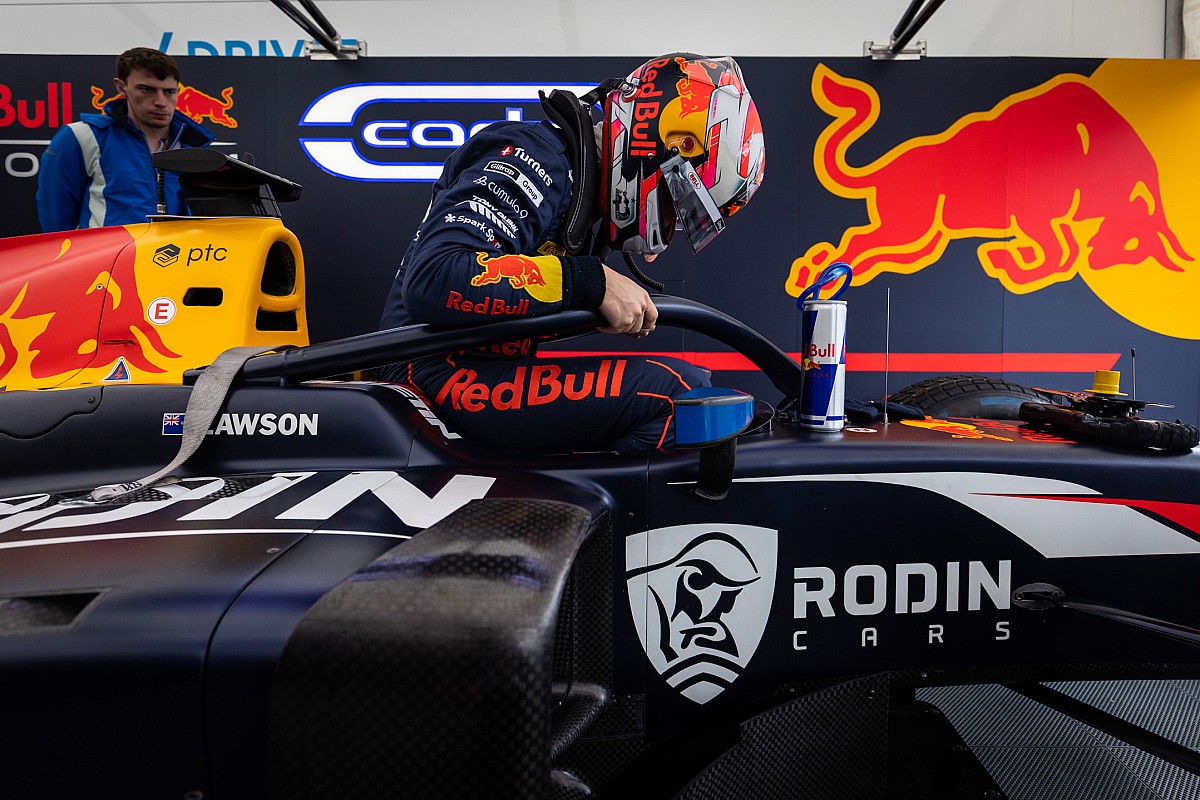 Liam Lawson has been stripped of pole position for the FIA Formula 2 feature race in Monaco for a yellow flag violation.

F2 in Baku always delivers a interesting 14 laps. then what a ending drama everywhere. 3 safety cars in 5 laps but if it wasnt for incident being on the final lap it wouldve been 4 safety cars in final 7 laps. Jake Hughes who was having a shocker starting from pole but was a sitting duck with DRS ended up in 18th but got back to 9th

hauger who is becoming under increasing pressure with the historical nature of knowing what Leclerc Russell & Piastri did in F3 & F2. Hauger began the chaos, locked up stuck it in the barrier

oh Vips if he isnt

it up on the track he has now