Contributor
Back in the old 606 days I attempted to create a league table which compensated for retirements and mechanical issues. 606 being what it was I ended up getting shot down in flames and I was accused of being a Vettel fanboy. The project only lasted a few races due to the opposition I received whilst making it.

To create a new "what if" table for this season would involve a lot of work but I feel like it may be possible considering the amount of statistical data available on this site. Luckily I do have time on my hands at the moment and I think I'll give it a go again. If I can cobble together a decent write up to go with the stats I might even enter it into the article competition.

Staff Member
Good luck with that task F1Yorkshire, it's going to be a tricky one.
This BBC article highlights all of Hamilton's issues this year: http://www.bbc.co.uk/sport/0/formula1/20350893
There may even be more, I don't see the damaged rear suspension listed there.

Now you just need to do that for the other 23 drivers and then somehow recalculate finish positions for 20 races.

Sometime next year then?

Contributor
The tricky part is determining how much those stops cost Hamilton, What is also tricky is for example determining Schumachers position in Australia, he retired very early with a gearbox problem from 4th place, there is no scientific method in determining where he would have finished, all I can do is compare his pace to Rosbergs in that race and to some extent the cars pace in the next race to gain an approximation of where he would have finished.

It is certainly going to be a challenge and the results will be interesting to see.

Brogan said:
Sometime next year then?

Would be interesting. I'd suggest to start with it at the first race.

F1Yorkshire said:
the results will be interesting to see.
Click to expand

And no doubt heavily disputed

That's why it's a good idea to start with it after the first race. On a race-by-race basis there will be more agreement (although never will there be complete agreement).

Contributor
Will be easier going forward for next season but this seasons will have to be done retrospectively and I will be looking through race threads to see where blame has been allocated. I'm going through Australia's results now, Grosjean wasn't at fault for his collision so his race position will need to be calculated, on the other hand Maldonado was at fault for his crash so his result stands. 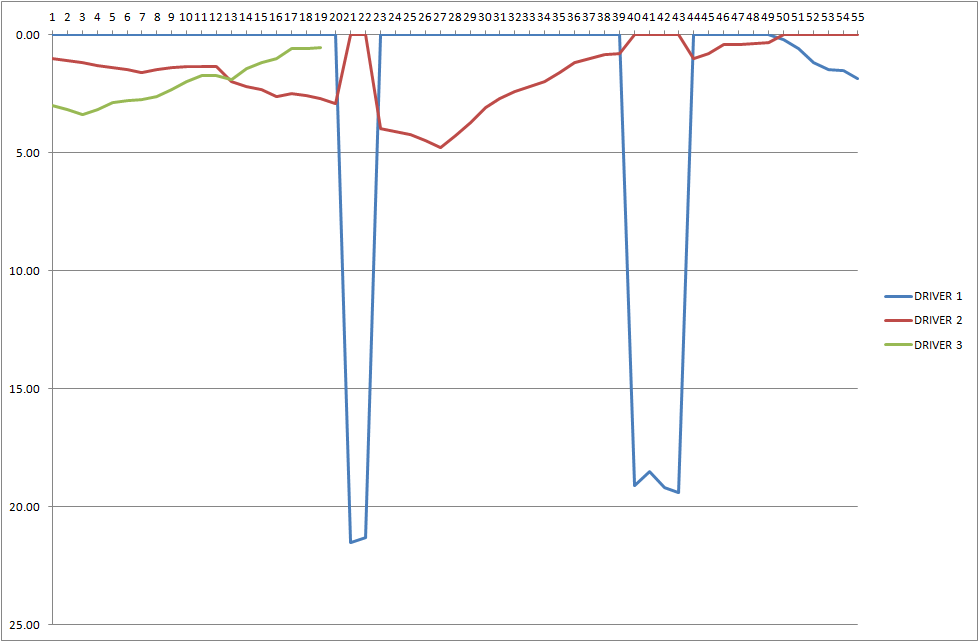 DRIVER 3 retires on Lap 19 of this 55 lap race. He's in 3rd place catching the leader just before he pits for tyres. Where do you assume DRIVER 3 finishes if it weren't for his retirement? Do you assume he keeps getting faster and takes the lead in the first stops and holds onto it? Or does DRIVER 1 get an advantage on new tyres as he does compared to DRIVER 2 and stays ahead? But then what? Does DRIVER 3 pass DRIVER 1 later in the race, or does he act as a buffer holding up DRIVER 2 in the last phase while DRIVER 1 wins?

We don't know, because pace is variable. So either way, you're just estimating based on a guess; with @F1Yorkshire's Grosjean/Australia example on less evidence than we've got here.

Contributor
I'm not sure how much easier it will make things, apart from the fact that this could probably be implemented in a spreadsheet/code, but could I suggest only investigating cases which meet the following criteria, rather than looking at everyone in detail. One or two issues may be missed but I think broadly this works.

Flag an issue if....
Then you at least have some sort of objective criteria to start with and you avoid analysing the effects of more minor issues like strategy calls that didn't quite work out but weren't disastrous. Once you have the lists of drivers who pass one of these criteria you have to figure out which are genuine issues and what caused them. If it wasn't the drivers fault then comes the tricky bit like you say of figuring out what it cost them. I think again it would be beneficial to try and come up with some objective way of doing it, but I haven't got any genius ideas right now.

Contributor
It can only be my best guess. In the cases of Grosjean and Schumacher both team mates survived till the end of the race so I know roughly what the car was capable of. Schumacher will have gone backwards which his car has tended to do all season while the Renault does generally improve as long as it avoids incidents with other cars.

I've actually been making such analyses for several seasons (thought it'd be interesting to share to pass the winter months). I'm doing the full-year analysis in a bit, but here's my mid-season analysis (up to the Hungarian Grand Prix).

What counts as misfortune: mechanical failure, being crashed in to by another driver, undeserved penalties
What does not count as misfortune: wrong tactical choices, crashing their own car, penalty by the driver’s own doing

Full article (by me)

Contributor
Thanks to FB this is now a seperate thread and I think it will be a good place to consult on various race outcomes as I go through each set of results.

I've done a preliminary analysis of Australia and have so far come to the following conclusions.

GRO was taken out on lap 2, using the pace of RAI I determined that GRO would have maintained his 6th position as even though the car was quick at that stage of the season I don't believe he would have been quick enough to overhaul Alonso.
MSC had a gearbox failure, Mercedes have had a dog of a car all season and even though he started in 4th I think he will have lost paces and dropped down to 7th.
HUL is a tricky one to determine, he was taken out in a 1st lap incident, I've not being able to find out if it was his fault or another drivers that he was out of the race. I have given him the benefit of the doubt and looking at the pace of the Force India in comparison to the other cars I have given him 11th place.
SEN & MAS Both collided with each other and subsequently retired on later laps. I have not found out who was at fault and have treated it as a racing incident and given them 15th and 16th positon.
ROS collided with PER in a last lap incident, fault to be determined, both were classified though. ROS may need to be reclassified above SEN & MAS depending on the outcome of the debate.
MAL crashed on his own while chasing down ALO, this was a last lap incident so has been classified in front of the drivers who were a lap down on the leaders.
KOV & PET both had mechanical issues but their cars were faster than the Marussias and they should have overtaken them had they stayed in the race.
M

Contributor
Are you only taking mechanicals into account or track incidents?

For instance I see Malaysia mentioned but it could be said that Jenson could have won that race if not for the incident with karthikeyan, Vettel also had a problem with him...

In other words how far do you take it?

Contributor
All incidents are going to be allowed for. If a driver makes an error on his own or is clearly at fault such as Grosjean at Spa then their DNF's will stand. I'm dreading Spa already, 2 of the fastest drivers on the grid were taken out at the 1st corner through no fault of their own so determining where they would have finished is going to be very controversial.

It's definitely not going to be a solo effort, all opinions will be gratefully received!

Valued Member
Other events at Melbourne that may be of interest or not:

Webber was sandwiched between Hulkenberg and Vergne at turn one on the first lap, incurring puncture and suspension damage for Hulkenberg, cosmetic damage for Mark and little apparent damage for Jean-Eric.

Daniel Ricciardo was hit from behind by Kobayashi on lap one and knocked into Senna, causing him (Ricciardo) to pit for a new nose. Importantly (or not) the car was then pulling to the left for the remainder of the race.

Rosberg had passed Perez on the back straight, moved across on him on the straight, and Sergio's front wing punctured Nico's rear tyre. I haven't seen the footage again since, but I think I laid the blame with Nico at the time.

Contributor
To open up another can of worms, the safety car lost Hamilton 2nd place and may have caused other changes down the order.

Contributor
Racing incidents should only count where a penalty is given to the other driver.

I tried something similar to this for 2010, to try and justify to myself that my opinion that Vettel nearly cocked it up badly was accurate. I think he would have won my 'non-retirement' championship by miles from Webber (team-mate) and the over-achieving (that year) Alonso and Hamilton very close together... I do also remember thinking about how contrived it was when I was doing it though...

Contributor
Cheers G, The Hulk incident has been allowed for, thanks for clearing up the Rosberg incident. His position should still stand as it was a last lap incident and he did pass the stricken Maldonado even with the puncture.

Ricciardo will be a difficult one to work out, no doubt he will have lost at least 40 seconds for the pit stop plus a reduced lap time due to a damaged nose. The drivers he lost out to though did have incidents later on and his calculated position would have been about right although he may have overtaken Hulkenberg had he stayed in the race as his pace was faster than Di Resta's