Valued Member
So, we enter an era of flux. It was a time when a season had lots of different winners, year on year.
GRAPH: Number of winners per year in F1 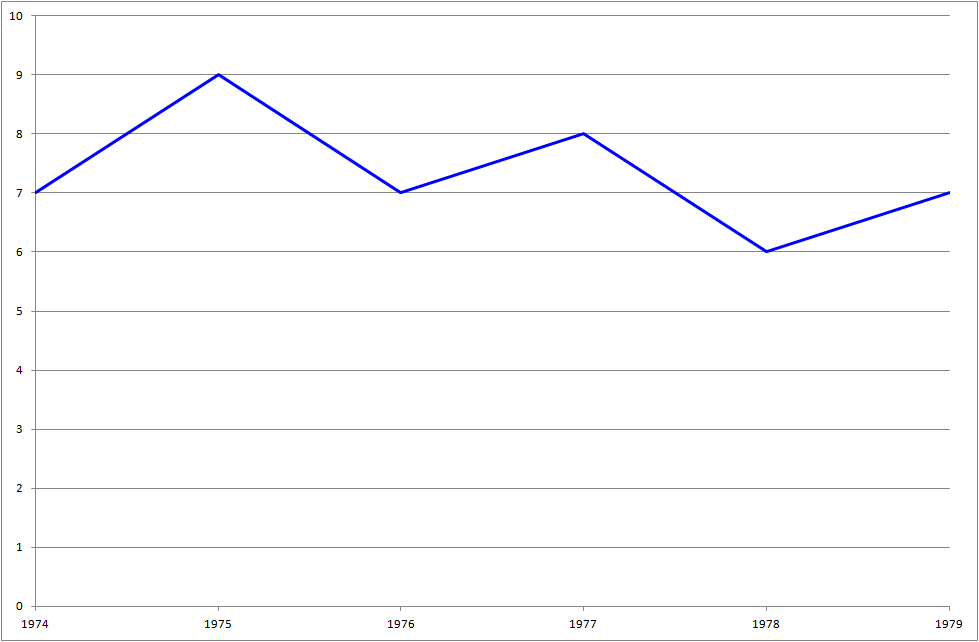 However, it is a time that will be fondly remembered by fans of Ferrari.
GRAPH: Kilometers lead by constructors 1974-79 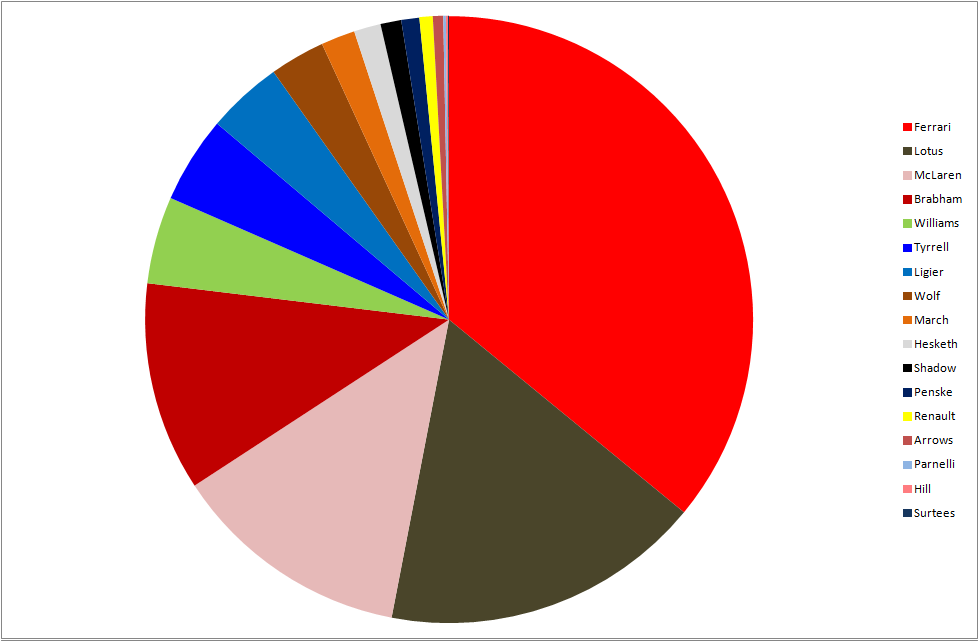 Ferrari were prominent in this period. They took the fight to, and sometimes defeated, the Cosworth-opoly of the previous 6 years. Aside from them, most constructors went with the Ford Cosworth engine, which took a constructor to at least second place every year from 1967 to 1982. 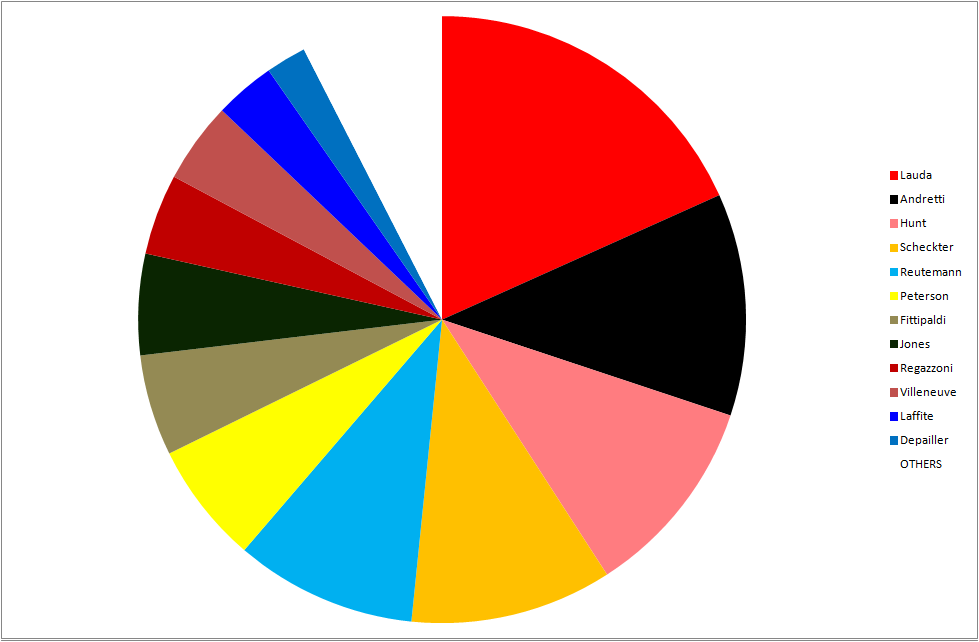 Although Niki Lauda did unsurprisingly win more races than anyone else in this period, there is a sense of a quite even sharing out of the victories. Andretti, Scheckter, Hunt and Reutemann are also quite prominent; there is also a higher-than-usual number of drivers winning around 2-9 Grands Prix.

However, for all of this flux, it is surprising how well Ferrari actually went in the Constructors' Championship:
GRAPH: WCC positions of 5 constructors 1974-79 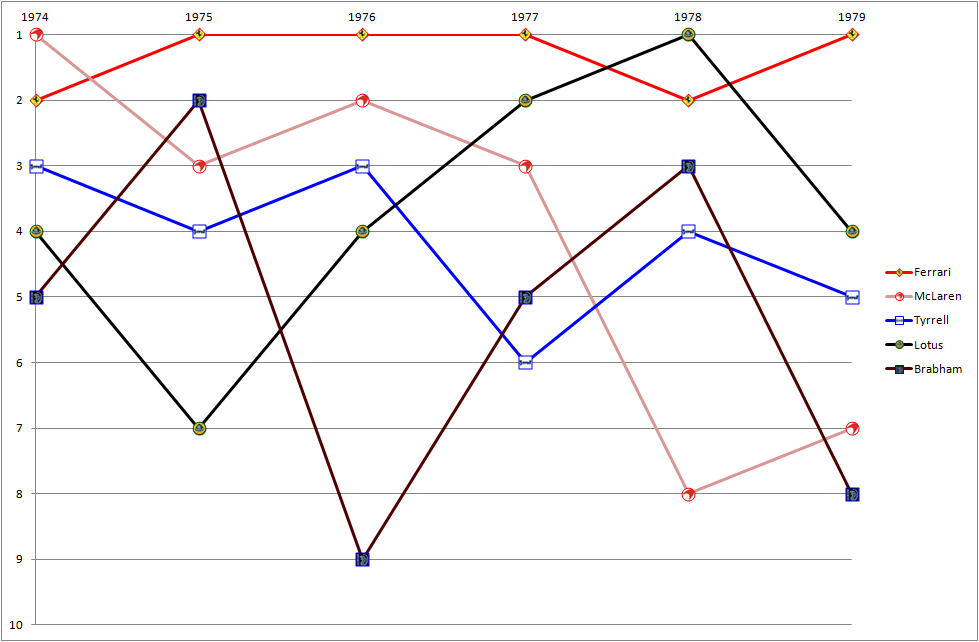 They won 4 of 6 Constructors titles and only Lauda's fireball at the Nurburgring prevented them taking all the drivers' titles with them. The likes of Ligier, Williams and Wolf fill in the gaps in the graph, while upto six constructors could take wins in a season. McLaren's first success of the middle of the decade is followed by a slump that required Project Four to get them out of...

Lotus had won their last titles, Brabham's would soon follow. F1 was heading into the era of McLaren and Williams.

Contributor
I think this era proved the greatness of Mario Andretti, who was a master of develpment and car set-up. Look at the Lotus curve after Mario joined in 1976. The Lotus 77 was so dire that Peterson abandoned ship after two races, yet Mario persevered and turned the car into a winner. Mario was instrumental in the creation of both the 78 and 79 and would have been WDC in both had the 78 been a bit more reliable. With the advent of the 80, Chapman's obsession with lightness caused problems, as the chassis was too flexible to handle the downforce it created. Mario finally convinced Colin to add the "horse collar" cockpit stiffener that he had them add to the 79. While that had the desired effect, the spring perches etc were so lightly constructed that rivets kept popping etc. The learning curve in the brave new Massive-downforce era had begun!

This was the time frame where Williams began to become a force to be reckoned with, particularly with the beautiful FW 07, while McLaren were losing the plot. Shadow breifly showed great promise, but the tragic death of Peter Revson robbed them of their best chance of glory.

A very interesting time in F1. It was also the last time frame where F1 kept me intrigued. After this, privateers such as Hesketh and Wolf would have virtually no chance, which, to me, greatly lessened the spectacle, as there would be no more David-and-Goliath battles.