Valued Member
Welcome to my new F1 History series. Each post will provide a broad overview of a period in F1 history, with a statistical bent. As a forum, I hope the personal memories and debates will be provided by you, the member base. Hope you enjoy!

The Formula One World Championship was a new thing in 1950, stringing together a series of prominent Grand Prix, the first "Championship" to do so since the 1930s European Championship. Sure, the World claim was initially spurious, but it left room for expansion. The Indy 500 is from hereon in to be entirely ignored.

In this era, constructors often came, signed Fangio, dominated and went. For the only time in F1 history, Britain was not the pre-eminent home to constructors; Italy providing the most.
GRAPH: Distance (laps led X length of individual laps) lead by Constructors 1950-57* 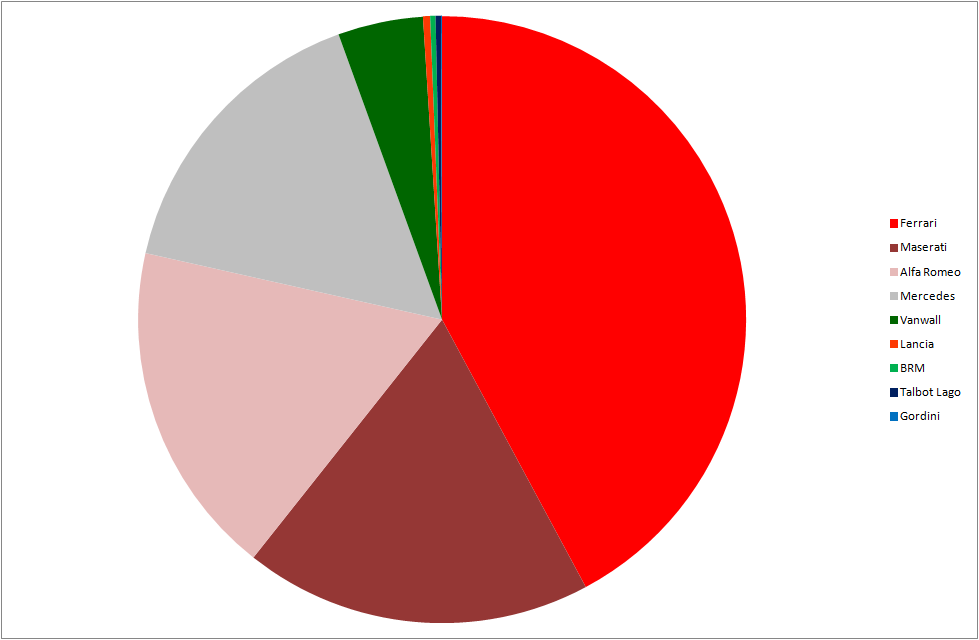 Even as far back as 1957, Ferrari were the only true everpresents on the World Championship course. Alfa, Mercedes and Maserati would take it in turns to challenge Ferrari, with the exception being in 1952 when Fangio was absent. Those two years of F2 racing in 1952 and 1953 would be dominated by Ascari and Ferrari, but there is no doubt which driver dominated this time period as a whole: 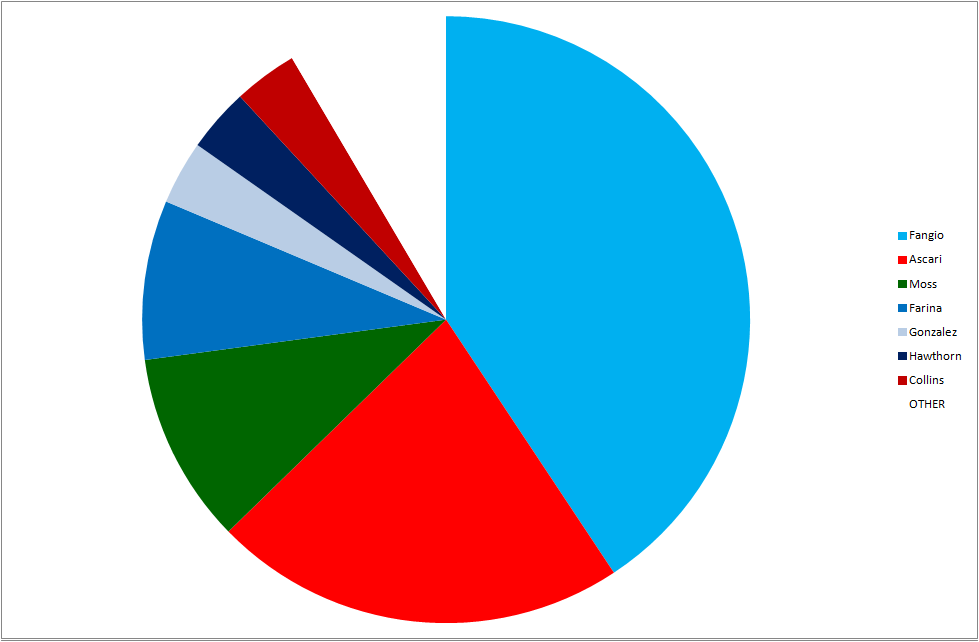 In the eight years to which I refer, only these seven drivers won two or more Grands Prix (as shown above). Fangio won a mammoth 24 races - 42. In the seven years he competed he only failed to win the title twice:
GRAPH: Distance between J. Fangio and best other each year 1950-1, 1953-7 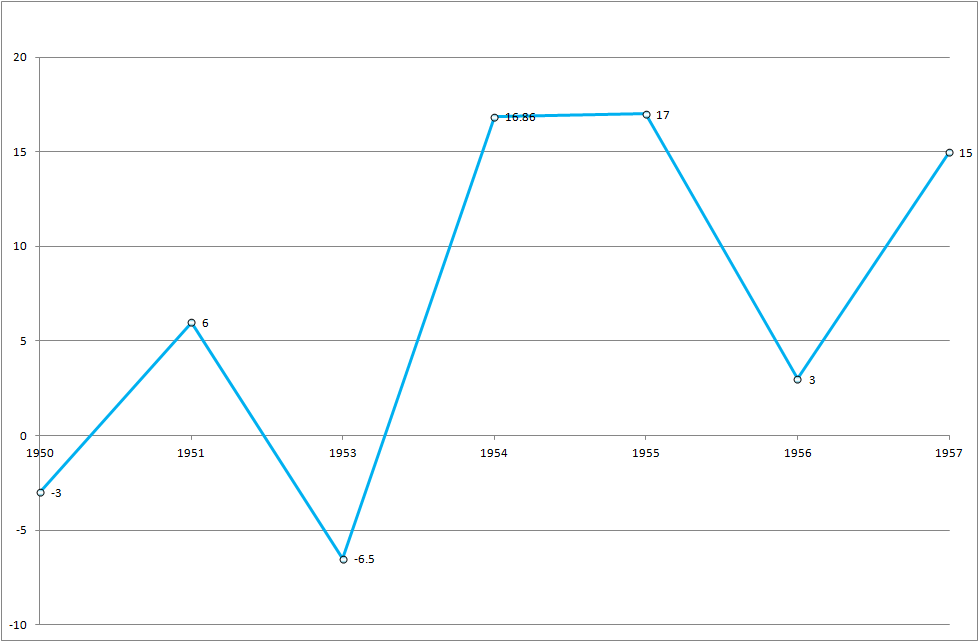 To trail Alberto Ascari's dominant Ferrari of 1953 by only 6.5 points is quite some achievement, which is why he will forever be remembered as The Maestro.

The era was also the era of the old man. I believe Mephistopheles will go into this in more detail, but this is in part due to the war. Gradually the age of the top drivers came down, as this graph will show:
GRAPH: Youngest and oldest average ages of podiums 1950-7 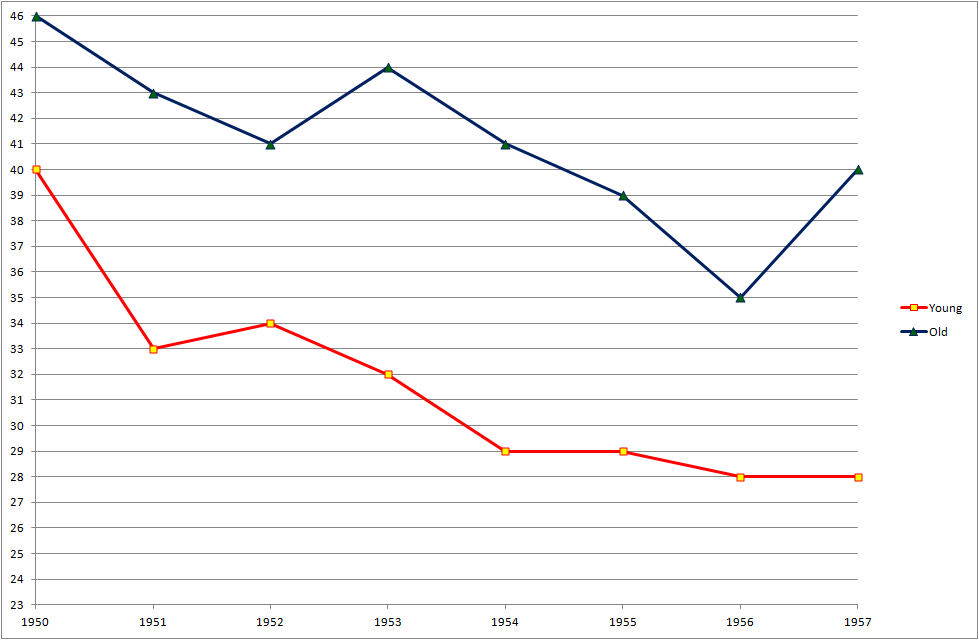 So 1950-57, dominated by constructors in short bursts, but always by Juan Manuel Fangio. The age getting younger as routes into motorsport became available again. And, of course, at the heart of it all, as always, brave men putting their lives in danger.

Contributor
Another great thread teabagyokel and indeed I am working on an article about drivers ages from the beginning to the present day...

Contributor
teabagyokel, there was a world constructors championship preceding the European one - from 1925-1927, with 5 Grade Epruves (including the Indy that no regular's attended). Alfa Romeo, Bugatti and Delage won.
M

Contributor
Yes tooncheese but to all intense and purposes Modern day Formula one started in 1950 before that it was more of a nation vs nation sport which is where the team colours came from, they picked a colour from their national flag the reason Britain has green is because they were not allowed to race in Britain at the time and so raced in Ireland and took the green from their flag also Italy took red Germany took white and France took blue....

Contributor
Mephistopheles, strictly speaking the first Formula A races were in 1947. I was just adding a nugget of information to tby's prelude.

Mephistopheles said:
Yes tooncheese but to all intense and purposes Modern day Formula one started in 1950 before that it was more of a nation vs nation sport which is where the team colours came from, they picked a colour from their national flag the reason Britain has green is because they were not allowed to race in Britain at the time and so raced in Ireland and took the green from their flag....
Click to expand


Well feck me!!!!! I should have known it all along Hill,Stewart,Mansell and co. were all Irish

Contributor
Since that era predates me, all I can say with certainty is that each and every competitor of that era had more balls than a Christmas tree!