Contributor
I'm not sure how many Poles were polled Mephistopheles.

Mephistopheles said:
Just goes to show how the poles are influenced by fandom
Click to expand

Yeah, some manage to vote 4 whole points below the second lowest rating just because their least favourite driver won.
M

Contributor
I can absolutely definitely say on my daughters life that is not why I gave the race a 2 and in the same vain Hamilton is not my least favourite driver by a long way.

I tried watching the highlight again last night to see if I missed anything that should have rated the race higher and I hadn't it was a plain ordinary, mundane, boring race....

Premium Contributor
What makes you think that Hamilton is vain? In the same vein his girlfriend probably is vain.

Contributor
I had to re read my post several times to see where I called Hamilton vain and then I got it...

Contributor
Probably quite a generous score for Monza as Hamilton reignited his championship fight but there were some good midfield battles: 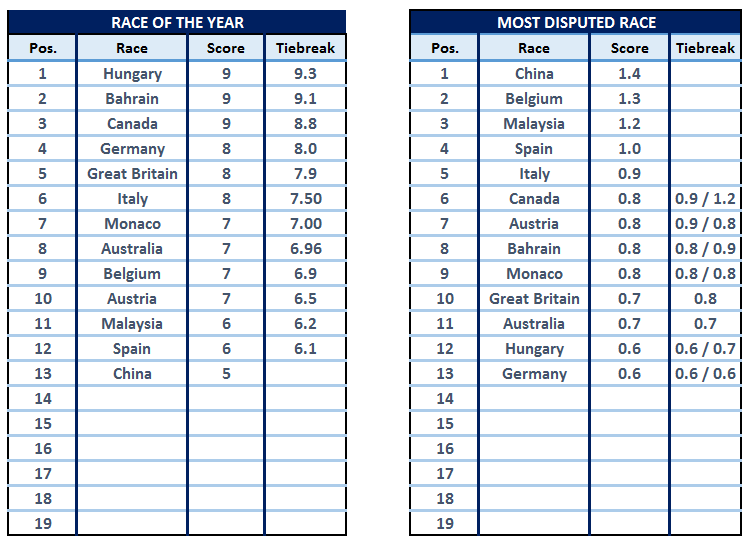 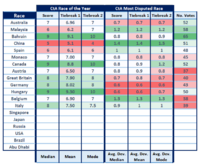 Contributor
I'm going to break my rules and from now on I'm only going to give you a week after each race to get your votes in. So here are the updated tables from Singapore, which is voted second to last just ahead of China in the battle to be the worst race of the year. Will the championship battle in the last 5 races bring us anything that can knock Hungary off its perch? 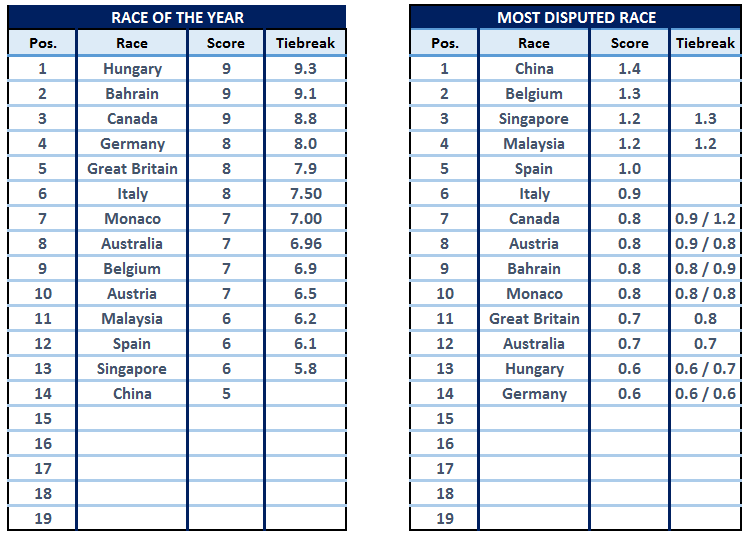 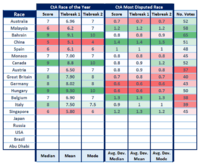 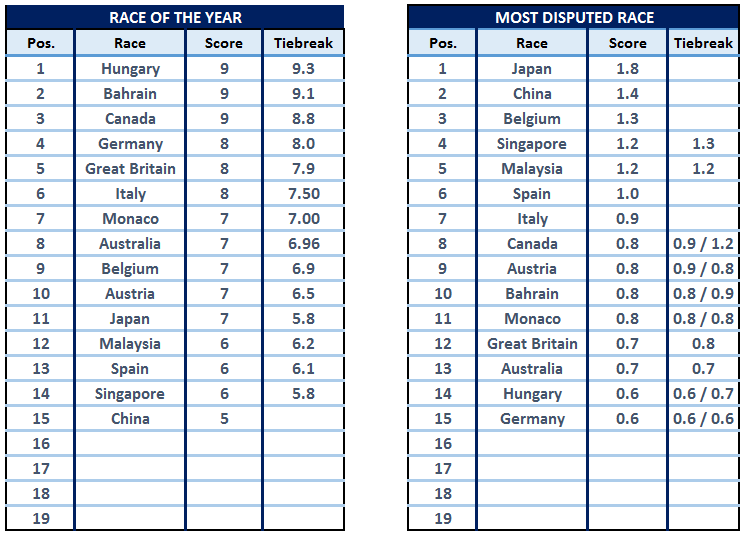 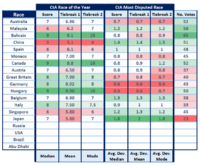 Contributor
There were low expectations for Russia, followed by signs of promise, followed by an extremely dull race. It takes bottom spot. 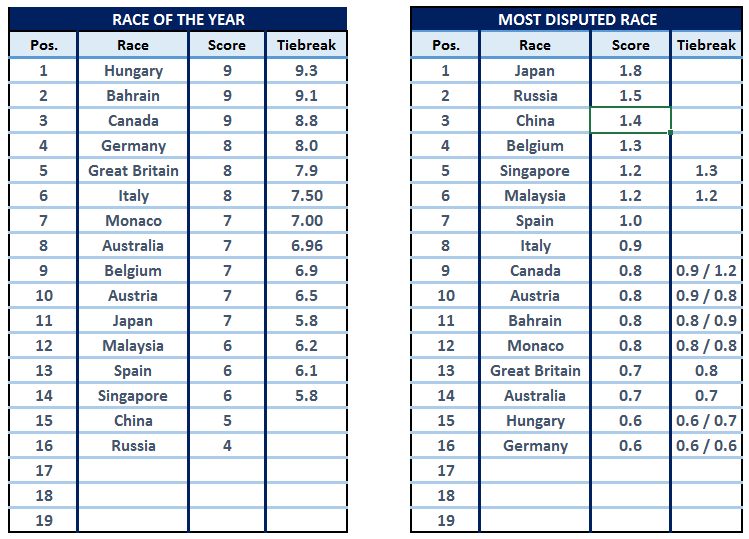 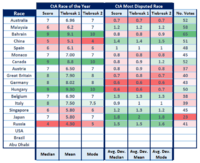 Contributor
Austin provided another decent race and the USA grand prix becomes the 7th race of the season to score an 8 or above. Only two more to go! 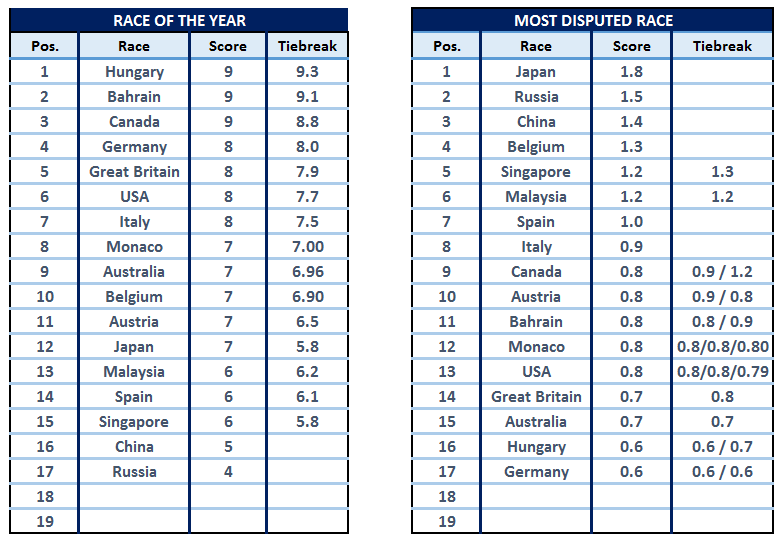 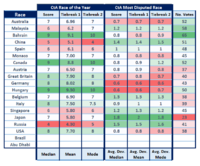 Contributor
Middling results for Brazil, will there be anything to get excited about at Abu Dhabi? 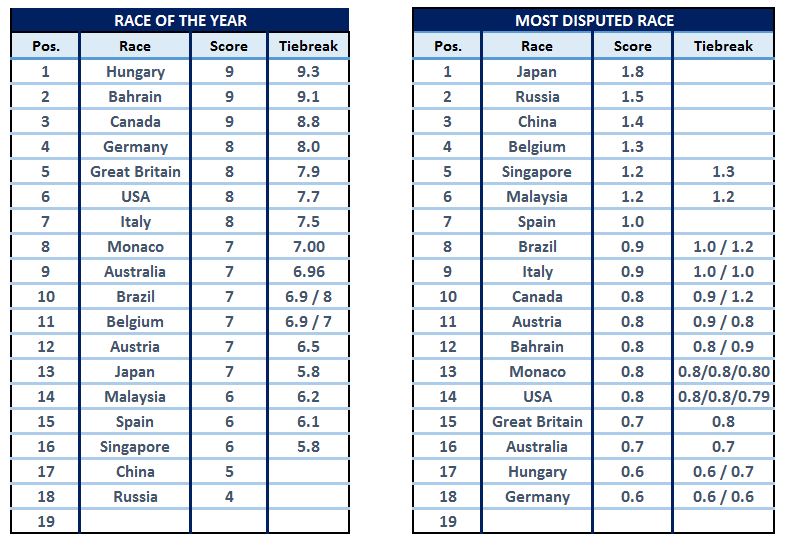 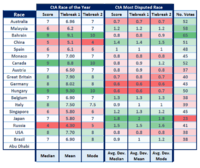 Contributor
Here we go then, the final results are in! Abu Dhabi had a wide spread of votes depending on whether people were more influenced by the championship win or what was in reality a fairly dull race aside from that.

1) Hungary: For the 2nd year in a row Hungary takes the CTA race of the year title! This year we had rain to spice things up at one of the circuits with the least overtaking opportunities. A safety car robbed Rosberg of the large gap he had build up in the early stages and he wasn't able to recover, with Ricciardo winning his second race of the season. In a big moment for the championship we also saw Hamilton, who started from the pit lane after a failure in qualifying, manage to recover to overtake Rosberg. Lewis refusing to simply move out the way for Rosberg to let him chase Ricciardo plus a bit of argy-bargy on the kerbs in the dying stages provided more excitement and no doubt contributed to the incident at Spa.

2) Bahrain: Despite all the abuse it gets for being a terrible circuit and providing awful races, Bahrain finishes 2nd for the 2nd year in a row! As happened more often than not this season, Rosberg started the race from pole. However, Hamilton got off the line better and was able to take the lead at the first corner. Rosberg actually looked faster on the day and what followed was an incredible battle between the two Mercedes drivers. No matter how hard Nico tried, he couldn't make a move on Lewis stick. It was breath taking to watch and probably my highlight of the season. We also had a performance from the acrobatic school of Pastor Maldonado and Esteban Gutierrez.

3) Canada: After 6 races of Mercedes dominance, Canada gave us one of only 3 races this season that a Mercedes driver didn't win. And all of those races were won by the hugely impressive Ricciardo and his gigantic grin. The early stages of the race was shaping up in to a Bahrain-esque battle between Hamilton and Rosberg at the front. This time it was Rosberg who forced Hamilton off track, after Lewis managed to get alongside at the first corner. However, then disaster struck for Mercedes when both cars were hit with brake issues, forcing Lewis to retire. Nico managed to continue, albeit at a much slower pace which brought him under pressure from an unlikely source - Sergio Perez, who started 13th but brought himself in to contention with a 1 stop strategy. Perez ultimately didn't have the pace/tyres to overtake Rosberg (and later lost a good result thanks to a collision with Massa) but Ricciardo came charging through the field in the last few laps to take the win for himself.

I'll leave it at that for now, you can look through the rest yourselves. I'll try to do a comparison with 2013 at some point, I think in general the races were rated a bit higher. 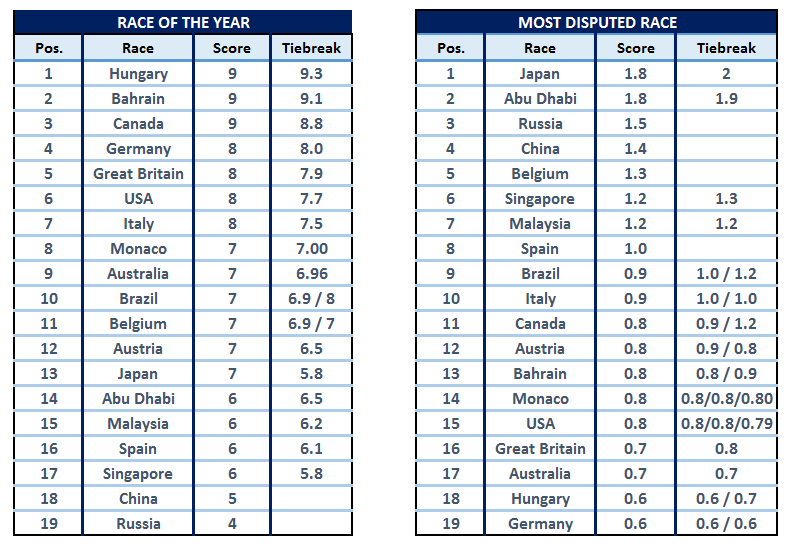 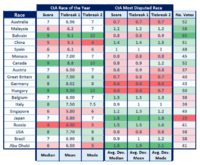 Race of the Year Graph: