Car upgrades to one driver or both?

Contributor
I was just watching part of the Bahrain race again and I noticed a small new vent on the front of Alonso’s Ferrari that reminded of McLaren’s ‘F-duct’ in 2010. I then went through some of the photos from this race and the previous races and saw that it definitely was a new upgrade for Bahrain but only on Alonso’s car not on Massa’s.

Then, presuming that Ferrari may be trying to run their own version of the ‘F-duct’ I thought I’d have a look at the Mercedes front end and Mercedes do also have a vent on their front end which first appeared on their car in Malaysia.

I was initially going to make a post about how Ferrari are possibly developing their own system similar to Mercedes but I noticed something else. While the vent has stayed on Rosberg’s car since Malaysia it was taken off Schumacher’s car at the Chinese GP. In commentary at the Chinese GP, David Coulthard made the point that he felt Rosberg was the right driver for Mercedes to get their first pole. So, perhaps those at Mercedes felt the same and gave Rosberg the better opportunity to win that weekend as he is supposed to be the long-term future of Mercedes. Or maybe Schumacher wasn’t happy with the upgrade in Malaysia despite out-qualifying Rosberg, finishing ahead and setting a quicker fastest lap in the race, so took it off for China but asked for it back in Bahrain… There could be a plausible reason as to why it wasn’t on Schumacher’s car in China or it may not even have much of an effect on the car's speed, I just find it a little odd that after outperforming his teammate it doesn’t appear that they were running the same car at the next race where his teammate was able to dominate.

Rosberg and Schumacher in China 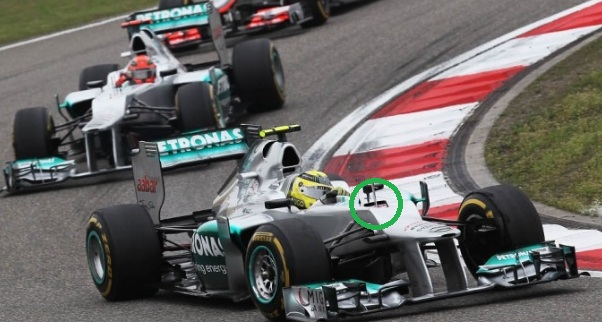 Some upgrades just come down to driver preference like Button and Hamilton using different front wings & brakes in Bahrain, or Vettel running an older spec car than Webber in China, but in some cases I think teams just upgrade one car first if it’s more ‘cost-effective’ than both or trying to engineer a better result for the team’s preferred driver. Perhaps I'm just seeing favouritism where there is none, I know if I ran an F1 team I'd give priority to one driver over another but should upgrades always go to both drivers? Red Bull were accused of favouritism at Silverstone 2010 after giving Vettel Webber's front wing, but at least they had initially manufactured them for both cars.

Premium Contributor
I'm afraid that the vent is just a cooling duct, it's probably driver preference. It's also well known that Alonso sometimes drives with his visor slightly open to manage the heat better, not sure about Rosberg though.

As for whether it is fair to give one driver parts but not the other, of course it isn't. However I would still do it as a team boss, if you have one 'ace' driver who can be relied upon to bring in the points then the decision to prioritise the lead driver will be more than vindicated once the WCC money is given out.

Contributor
Well we all know the situation at Ferrari. But it is fundamentally unfair on the driver who doesn't get the upgrade (at least to try out the upgrade).
M

Contributor
Ummm It is different these days as there is no in season testing so bringing updates to a race is a bit of a gamble it makes sense to bring only one package so as it can be assessed against the currant one I don't think there is any malice in it unless you take the case of RedBull taking the new front wing off of webber to give to seb after seb had damaged his own at silverstone, that was extremely dodgy...

Contributor
But after two seasons of drivers getting the upgrades getting at the same time.

Doesn't this just seem very odd that we've had several incidents like this?

I'm not one for conspiracy theorys, but it's quite an interesting thread by Viscount.

Valued Member
I think it comes down to either a shortage of parts or driver preference. There is no logic that I can see in not giving both drivers a part that makes the car quicker if there are enough parts available.

Valued Member
If any of you have watched the Mega Factories program on Sky you will see how complex making a new wing was at Williams last season. They did the design work (including CFD), 2/3rd scale wind tunnel testing, input the data into the simulator and then get the driver to compare it and then set to and manufacture the thing. Once it was made they could actually try the thing on the track so I can understand why the improvements come through piecemeal. I can't remember the total cost but to then take it to the track and find it doesn't actually do what it is supposed to is very costly.

It's been a matter of routine these past few years in these days of no testing to bring an upgrade on the one car first, and we've seen it many times at McLaren in the aero department. We've often seen rhings like a revised rear wing element on Button's car with Hamilton simultaneously running an older version, or vice-versa.
The team then compares data from the two and decides which configuration they end up sticking with.

Contributor
It is possible that a team is trying out two modifications-one aero (and therefore visible) and one mechanical (and therefore not visible). Sound engineering practice would be to put one mod on one car, the other mod on the other. That way, you could judge the difference each one makes individually and thereby determine whether one, both ,or neither is worth continuing with.

Contributor
From what has been written in the past about those ducts is does seem that they are for cooling the driver. So for Alonso to opt for it in Bahrain rather than China is hardly surprising, the only strange thing is that not more drivers were using it.

If a team wants to test an upgrade it's logical to test it with the driver who's able to give them the best comparative feedback. I don't really think its a question of fairness. It's also in a teams interest to give any benefits to both drivers if at all possible considering their need for constructors points.