Staff Member
Premium Contributor
This year marks the 45th anniversary of the first running in F1 of a car in a sponsorship livery. No, not Team Lotus, it was Team Gunston, a privateer entry by the Rhodesian racing driver John Love who had come heart breakingly close to winning the 1967 race in his private Brabham entry. It would be another 5 months before Lotus wheeled out the Gold Leaf sponsored type 49 at Monaco.

In all this time there have been many familiar names to have taken up the opportunity to splash themselves along the flanks of the worlds fastest billboards and the sponsorship colours they have used have become almost synonymous with the teams that ran them. JPS Lotus, Malboro McLaren or Benetton to name a few.

This thread is to celebrate the more outlandish sponsorship's that have found their way onto cars. Some will be familiar and maybe some less so but it does show one thing, teams will do anything for cash.

There surely can be no better place to start than this car. After James Hunt signed for McLaren and Lord Hesketh withdraw the bulk of his funding from the team they had no option than to find some sponsorship to replace the good Lords' beloved red, white and blue colour scheme and sponsorshipless ambitions. This came in the form of a deal with the Penthouse ahem... "Gentleman's" magazine. With the car sporting a burlesque style lady on its nose cone and additional sponsorship from Rizla it certainly would have raised a few eyebrows at the time. 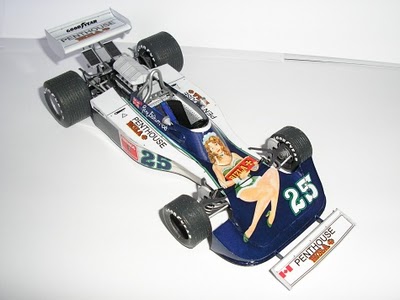 Not to be out done in the sponsorship stakes the struggling Surtees team landed a sponsorship deal with the Durex condom company. Never one to miss an opportunity, John Surtees' had stickers and promo material made up with the logo "Durex Surtees - The Small Family Car" which even though the car wasn't successful, you have to admit is quite funny. There was some confusion abroad however as in some parts of the world, the Durex name is more associated with a brand of cellotape. I can almost imagine the confused looks on some peoples faces when they were handing out free samples from the back of the motorhome. I bet it didn't go down too well in Italy either. 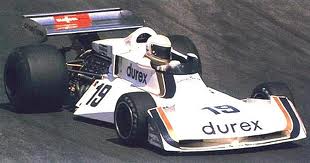 On the face of it, this deal doesn't seem as bizarre as the two cars above however you have to go back to 1983 when Skoal Bandits were introduced in Europe. For those unfamiliar with their name, on their introduction in Europe they caused a storm of negative press. A Skoal bandit is a type of chewing tobacco that comes in a small tin. Each bandit is a selection of flavored tobacco leaves in a tea bag like pouch that you are supposed to place under the lip and get that real flavour of tobacco and nicotine. Health organisations went into a tail spin as it turns out, believe it or not, these things are carcinogenic and really bad for you. There was a massive fear that kids would buy them in place of cigarettes. Consequently you couldn't see a consumer affairs program such as Watchdog on the BBC without someone calling for a ban on them. Imagine now, the reaction of people to seeing that name on an F1 team and it places it somewhat in to context. 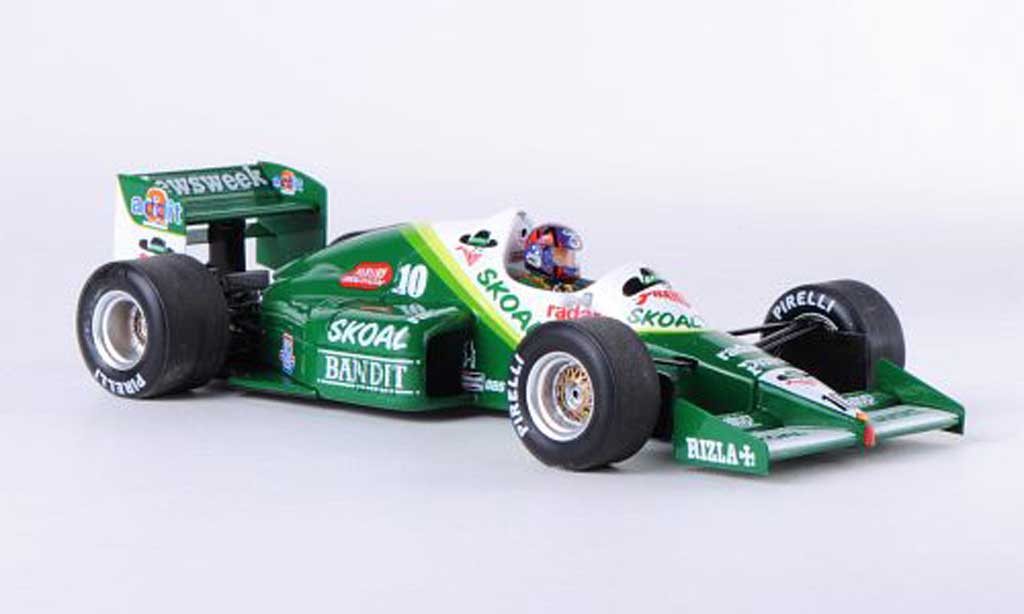 By some miracle of good fortune and persistence in 1989, the rookie F1 team Onyx managed to score a third place thanks to the efforts of veteran driver Stefan Johansson, at the Portuguese grand prix. There aren't too many teams that can claim to have scored a podium in their first season and maybe none with the tiny budget that Onyx had. For 1990 the team desperately needed a cash injection and an upgraded car. The cash arrived in the form of a partnership between Peter Monterverdi and Karl Foitek. Unfortunately that's where the troubles began. Monterverdi wanted to move the team from the UK and base it in Switzerland as a working exhibit in his motor museum. Johansson was sacked and replaced by Karl's son Gregor so in response Johansson took the team to court. The teams management resigned at the thought of moving overseas and the results went from bad to worse. The main sponsorship deal to appear on the car all season was an advert for Monterverdi's museum. The cars would eventually end up there but not as a working exhibit as the team folded mid season. 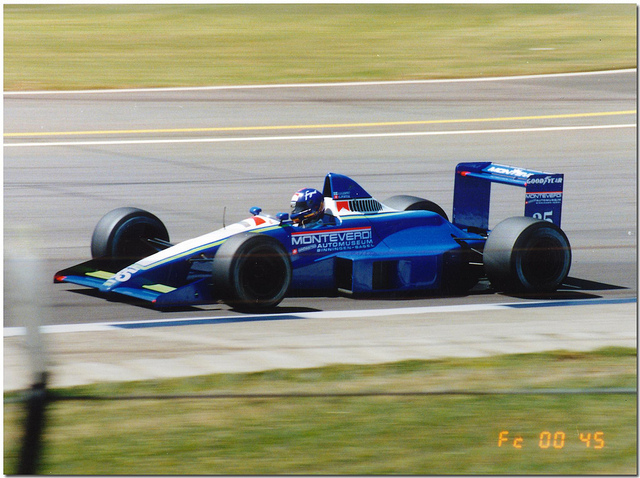 With huge funding from British American Tobacco and with a team management that was built around providing a race seat for 1997 world champion Jacques Villenueve, BAR entered F1 with huge hopes after buying the Tyrell team and rebranding it as British American Racing. Taking their cue from our friends across the pond they appeared at the launch of their cars with one sponsored by 555 tobacco and the other by Lucky Strike. This sent the FIA into a tail spin as in their rules, both cars must have the same sponsorship liveries. BARs legal team went into overdrive when they were told that this was not allowed and filed papers with the EU and the chamber of commerce under financial restrictive practice rules. Apparently, you can't do that in F1 as they may find in favour of the plaintiff and therefore team manager Craig Pollock was told to except the FIA's arbitration court on the matter or "else". Pollock apologized for the over reaction by his legal team saying that it wasn't his opinion and he would go before the FIA and accept their wisdom on the matter. The FIA court promptly told him that separate liveries were banned and the viewing public spent the next 12 months having to look at this monstrosity... 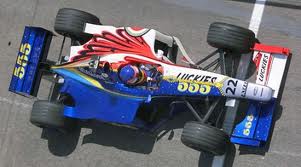 If there is one thing that people don't like is hypocrisy and if there is one thing that is sure to cause people to go off on one is an F1 team who spend millions of pounds a year flying hundreds of people all over the globe to make a car go as fast as possible using more sets of tyres in a weekend than an average family car will use in its entire life time banging on about the environment. It's funny that the last car that I want to look at, actually involves only the most minimum sponsorship at all. Honda for reasons only known to themselves, wanted to project a corperate image of being green and kind to the environment. They saw the perfect way to raise the awareness of these key issues was to paint the name of the website across the rear wing of the car. Fine you say, no problem with that. At least it's not silly names made up to pretend that we're not talking about fag packets (buzzin and hornets for example). Then someone in the Honda good ideas department decided to follow that plan up by painting the car to look like the earth. This truly must rank as the most bizarre idea for an F1 sponsorship campaign of them all. Bring back Penthouse and Durex I say. 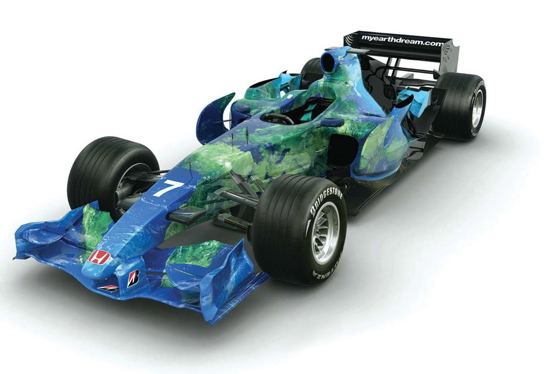 So, are there any others bizarre sponsorship deals that I've missed??

Are there any from wider motorsport series in the US or tintops that need to be added to the list??

Away from F1, my first thought was the Porsche 917/20 "Pink Pig", though not a sponsorship livery of course.

Staff Member
Premium Contributor
Yeah, the pink pig takes bizarre to new levels but as you say G, not a sponsorship logo though.
M

Of course there is the fact that Ferrari carried on advertising cigarettes even though cigarette advertising is banned...

Valued Member
The Samson Shadow was quite "eye catching" 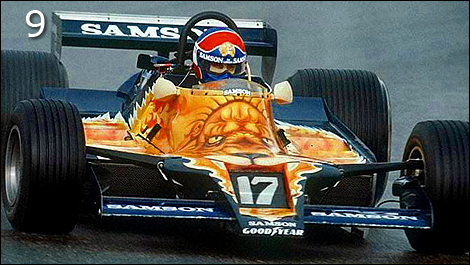 and the one-off Lowenbrau McLaren (Long Beach '79?) always confused me.

BAR I remember planned their whole marketing campaign on the two liveries ... what an expensive waste of money down the toilet ! 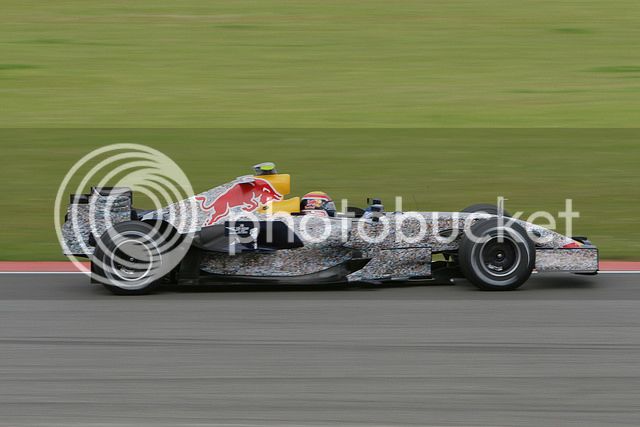 They did the same thing last year, except they kept their own colours: