A Game of Two Halves

), but how much truth is there to it? I think there's some interesting stories that can be told by looking at championship tables for the first and second halves of the season separately:

1st Half of the Season 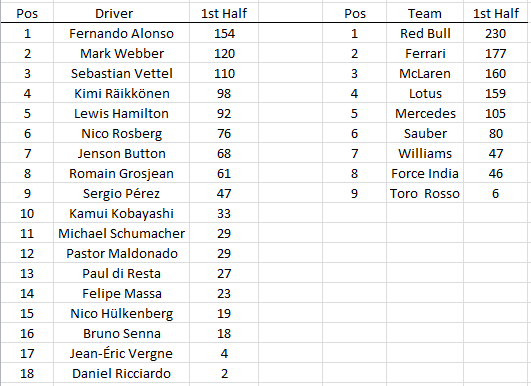 2nd Half of the Season 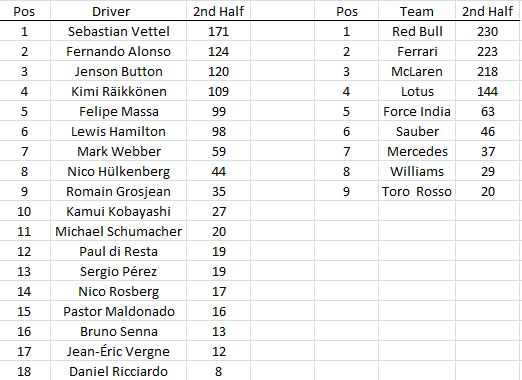 I few things that stick out to me:

2) Red Bull's drivers, on the other hand, see a complete reversal in fortunes - Vettel scored 61pts more in the second half and Webber scored 61pts less, so overall Red Bull scored exactly the same amount of points in both halves. Other role reversals: Rosberg vs. Schumacher, Di Resta vs. Hulkenberg, Button vs. Hamilton and Perez vs. Kobayashi,

3) Mercedes were rubbish in the second half of the season, with Rosberg only ahead of the Williams and Toro Rosso drivers. Sauber and Williams also lose out in the second half, probably as a result of driver errors and the rest of the teams catching up in terms of mastering the tyres.

I'm sure there's more to be learned but I'll leave that to the rest of you!

Premium Contributor
Did Nico Hulkenberg's 2nd half ascendancy take off when he found out he was going to Sauber ?

Did Nico Rosbergs second half descent into oblivion commence when Lewis was announced as his team-mate (..."no more Michael... now they will have treat me like a true numbe.... ['and in sports news Lewis Hamilton has just been confirmed for Mercedes for 2013 and beyond...'] ...

Contributor
That was actually another idea I had for an article, to look at the performance of teams/drivers pre/post championship winning drivers joining/leaving them. I have too many ideas and not enough time at the moment though, I'm trying to focus on a bigger article I have in mind which will be an extension of something like the above and something I posted earlier in the season about wins after 13 races.
You must log in or register to reply here.
Share:
Facebook Twitter Reddit Pinterest Tumblr WhatsApp Email Link
Top Bottom