Back in the day the German GP used to be followed a week later by the Austrian GP. This was when Hockenheim was a bizarre flat out blast out in to the forest and back again with a mickey mouse stadium section to pull the punters in. Hockenheim was neutered to create more grandstands and make it more TV friendly.

Austria was probably the most majestic circuit on the calendar with long, sweeping curves set in the Styrian hills which were a challenge for cars and driver alike. The Osterreichring, like Hockenheim, was then neutered to make it, supposedly, safer and dump more spectators in and around the circuit. It was renamed the A1 ring from 1993 to 2006, presumably as an homage to the London to Edinburgh trunk road. In 2011 it became the Red Bull Ring after the fizzy drink company rebuilt all the infrastructure whilst keeping the layout the same.

Now, one week on from the Austrian GP we have another race but this time not requiring the teams to drive about 450 miles and set up the whole circus again as we are staying at the Red Bull Ring and a new race has been created, the Styrian Grand Prix. Styria is, of course, the region of Austria where the track is located.

Last Sunday F1 won me back, for a week at least, with an exciting, incident packed race around the "The Ring". I suspect we will not see the same this weekend but I do hope that Verstappen's car will allow him to have a go at the Mercs and Albon won't have his race ruined again. Look for some sort of reaction from Lewis Hamilton after the series of troubles he experienced last Sunday.

A few notes of trivia. Racing drivers Helmut Marko and Jochen Rindt are/were both from the region as are Dietrich Mateschitz (well durr) and Arnold Schwarzenegger. In addition to these luminaries Styria gave us the Eurovision winner in 2014, Conchita Wurz. However, Conchita wasn't the first Eurovision winner from Styria, the lead singer of Teach-In came from here as well, and they won the competition for Holland in 1975.

Staff Member
I thought F1 had finally jumped the shark and this was for the Syrian GP ...

That's normally the go to title for double races in one country.

Valued Member
Saving it for another event perhaps?

cider_and_toast said:
I'm wondering why they didn't use the European GP tag.

That's normally the go to title for double races in one country.
Click to expand

although i dont see the point of Friday practise on these back to back if they dont know their car after 5 & 1/2 hrs of practise + qualifying & a race distance for half of the grid. you never will
Last edited: 6 July 2020

F1Brits_90 said:
although i dont see the point of Friday practise on these back to back if they dont know their car after 5 & 1/2 hrs of practise + qualifying & a race distance for half of the grid. you never will
Click to expand

Yes but, what if its raining over the weekend? They'll need to work on wet set ups. Also, it's free testing time which several teams may well need, having had mechanical issues last weekend.

Staff Member
They should have just done a BTCC and run two races on the same day and get it over with.

Staff Member
Premium Contributor
Or better still, just given Hamilton and Mercedes their trophies and said to everyone "See you in Barcelona in February 2021"

cider_and_toast but as we know when its raining on friday they do very little running because it not worth the risk as its dry on Saturday & sunday. or they need to save the tyres for Saturday or sunday

I didn't think we were allowed to race in the rain anymore.
Every time there's a bit of drizzle the safety car comes out. 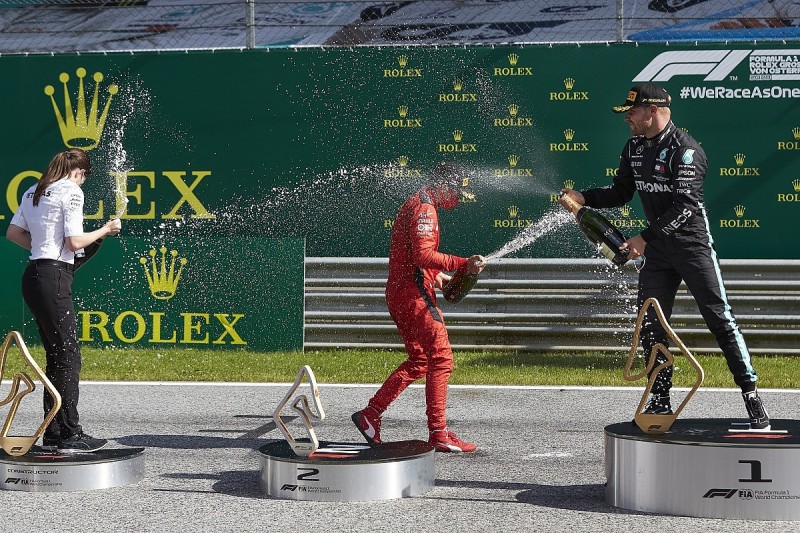 Ferrari, Mercedes set to be warned on F1 coronavirus protocols

Ferrari and Mercedes are set to be warned about following Formula 1's coronavirus protocols, after Charles Leclerc and Valtteri Bottas returned home to Monaco after the Austrian Grand Prix

If I were the FIA, i would throw the book at Leclerc and Bottas- and not allow them back into the paddock, having broken their bubbles. - at least until they’ve spent 14 days in isolation, without any evidence of COVID-19.

admittedly, that would probably hand the next two races (and the championship) to Hamilton, but they have to set an example!

Staff Member
Premium Contributor
Norris has been handed a three place grid drop on Saturday for overtaking under yellows during FP1 today. He also received 2 penalty points on his licence.

I don't think a podium is likely this time. 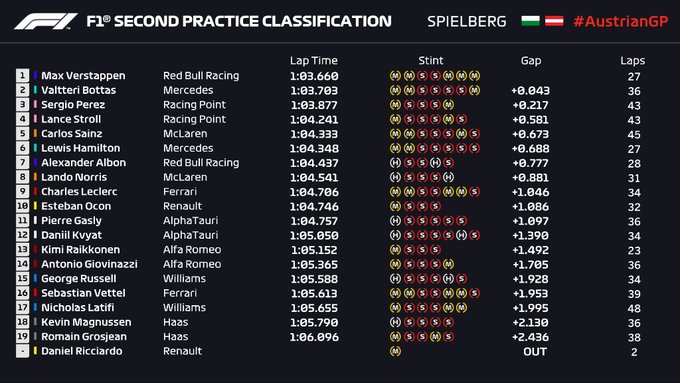 Staff Member
Apparently qualifying may be scrapped due to the torrential rain which is forecast.

If that's the case, the P2 positions will be translated to grid positions.

Staff Member
Premium Contributor
If Mercedes improved at the same rate as Haas went backwards then Hamilton and Bottas would already be qualifying for the next race.

You know things are not going well when you look at the grid and think that Williams are now making Haas look even worse.