The Stone.
Old Stoney.
El Silverado.
Names used for Silverstone by the types of people who say "pot-ah-to" rather than "pot-ay-to".

It is the “Home of British Motor Racing”. 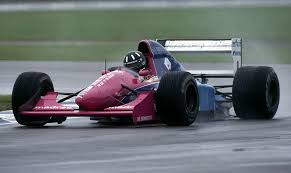 There's one thing that's a sure bet for the British Grand Prix - the expectation of fans in anticipation of the race will be colossal, what we need is for that anticipation to be met.
But of course, the local roads and villages won’t be jammed with fans; the stands won’t be throbbing with flags, cheers and smells. There’ll be a Formula 1 corona bubble (reminds me of fizzy pop) making the sensation different, a peculiarity, a “one-off” (until the following weekend’s rerun).

I thought I'd take a little look at the long-lasting corners on this circuit, the ones steeped and fermented in the motor racing ecstasy of the dozens of F1 races the former RAF training base has hosted. 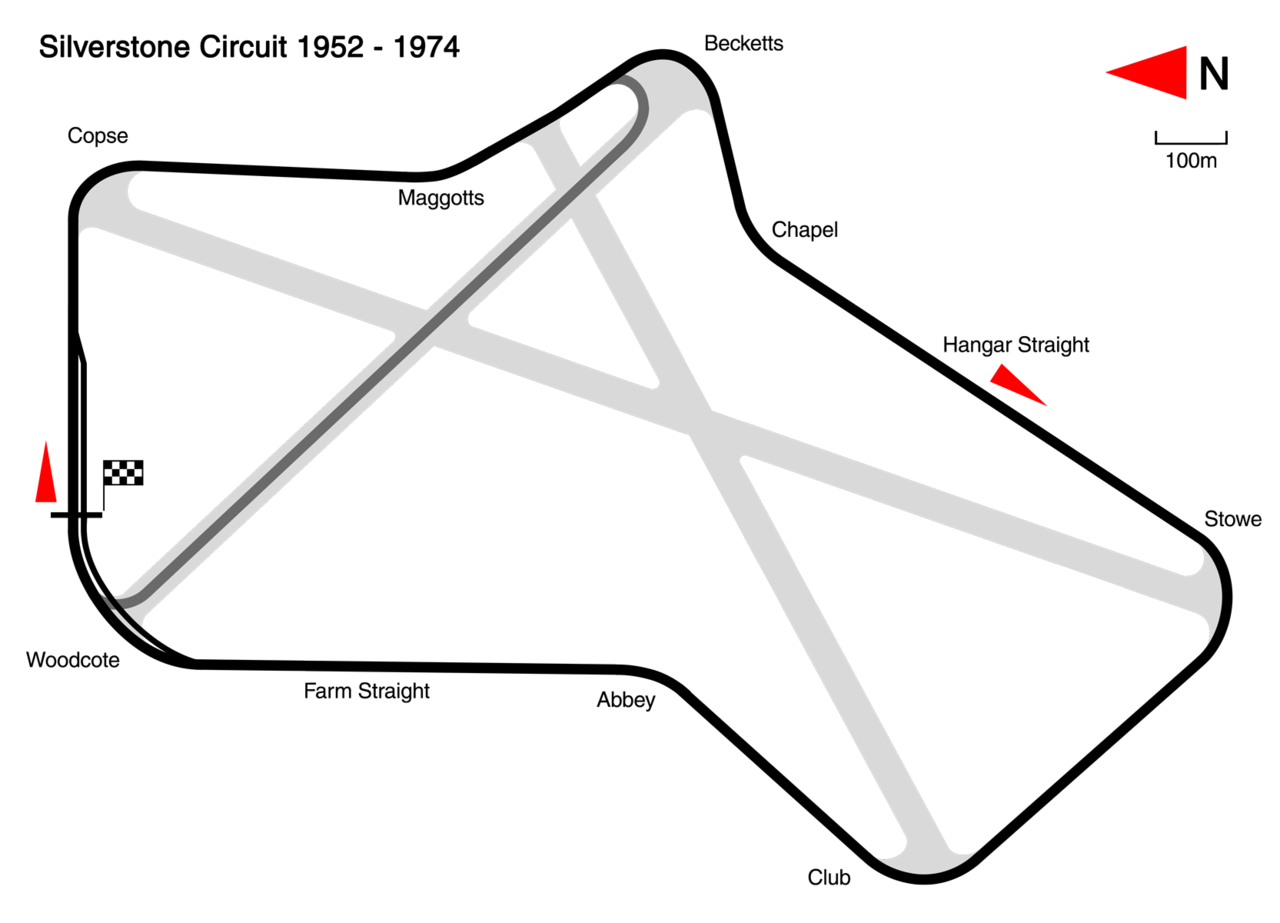 Today's first bend is Abbey, a right hander which is taken super-fast, entertaining for lap one as the cars get there fairly soon after the lights...those out of usual grid position will need to have sharp senses but for the rest of the race it's a challenge but not manic.

Considering Abbey was foot to the boards the rate at which cars arrive for Woodcote used to be startling - today they'll still be flat out and this is where aero and grip are king, allowing the speed to be carried down to Copse, which used to be turn one but now...

...drivers will be smashing it at top speed, a downshift and downforce pushing the car to scraping point as it turns in - topping 180mph for some. A balancing act though, and the runoff area's going to see some rubber for those who're really up for it.

Then Maggots, which used to also be a fast flash down into Becketts but now begins a swooping descent which shows racing nicely from the right camera angle, but it's processional nowadays rather than an overtaking opportunity, Chapel's not really worth mentioning but what comes next?

Stowe has always been a great turn, the Hanger Straight allowing drivers to give it the beans, and until the radical changes of this century was the fastest turn-in/braking point on the circuit. Overtaking? Well, a big set of conkers and perfect timing might help, especially as the track's wide, early in the race there might be some fun but later on most drivers will be focusing on a good exit to carry to the end of the lap...

...which is preceded by Club (my favourite spot to watch on a general entry ticket), back in "the day" this was yet another full throttle face bender but now it's a narrow tricky one which needs to be done right so as not to compromise the next lap.

So that was a little wander through the longer-serving corners, is the circuit improved? No – it’s different, just like the sport is different.
It's always been a power circuit, and that's something the BRDC were committed to retaining...it will be challenging on engines and tyres, limited testing and racing might cause retirements for mechanical reasons and if the right rubber isn't available well - we can only wait until practice & qually - weather currently looking breezy and cool for August.

So who's going to benefit this weekend? Here's what I think...
Mercedes to continue their domination.
Racing Point to be second runners.
Ferrari to have found a "miraculous"

engineering fix to their woes.
The others? No idea.

I haven't been to a race in its present guise, but when I was a frequent visitor in the 90s it was Brooklands/Luffield/Woodcote that gave me the greatest pleasure (with many thanks to Camel owner RJ Reynolds and Williams F1 for the freebies), every race I saw there was great and I always loved the event. I hope this one is something to relish.
Last edited: 21 July 2020
Click to expand

Premium Contributor
It will be cold at copse that’s for sure. It always was.

Here's the layout of the current track as used for the next race. I was a bit disappointed that they didn't use different layouts for the British GP vs the Emirates GP the following week. Seemed like a good opportunity given the flexibility of the track. 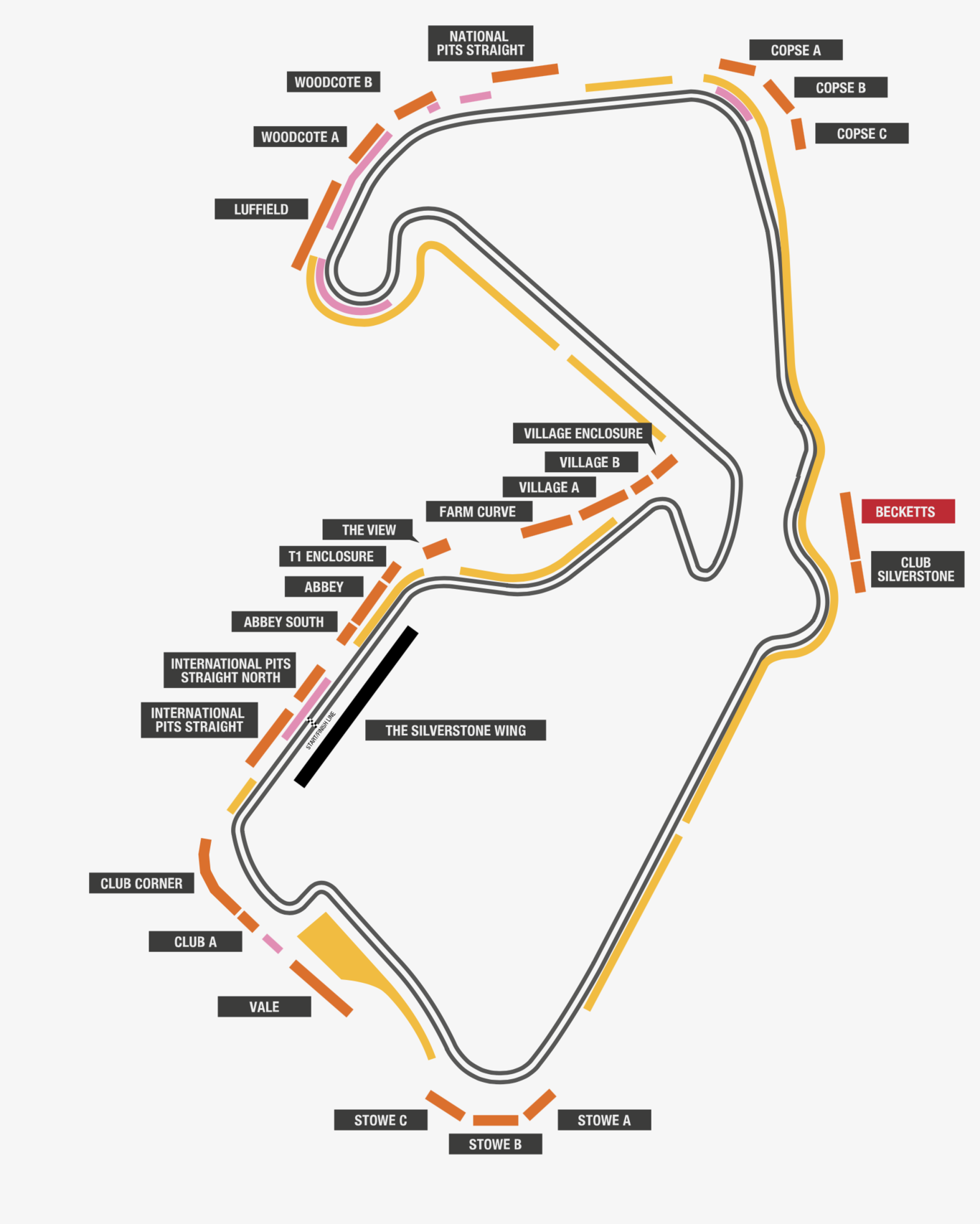 Valued Member
Is there flexibility in the track? Most of the old bits of the circuit have been built on or are now disconnected from the new one. There are two short "club" circuits but I can't imagine either is long enough for an F1 race. 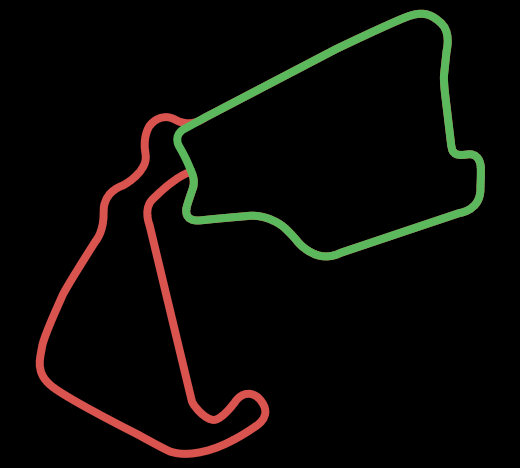 Anyway, it can't be any more dire than Hungary. Can it?

Premium Contributor
The short answer FB is No.

well i know BTCC will be racing both red & green circuits this season. i was hoping P1 that they would start at old start for the 70th anniversary. but it doesnt look like the old circuit been ripped up looking at Google maps. so could be used in theory 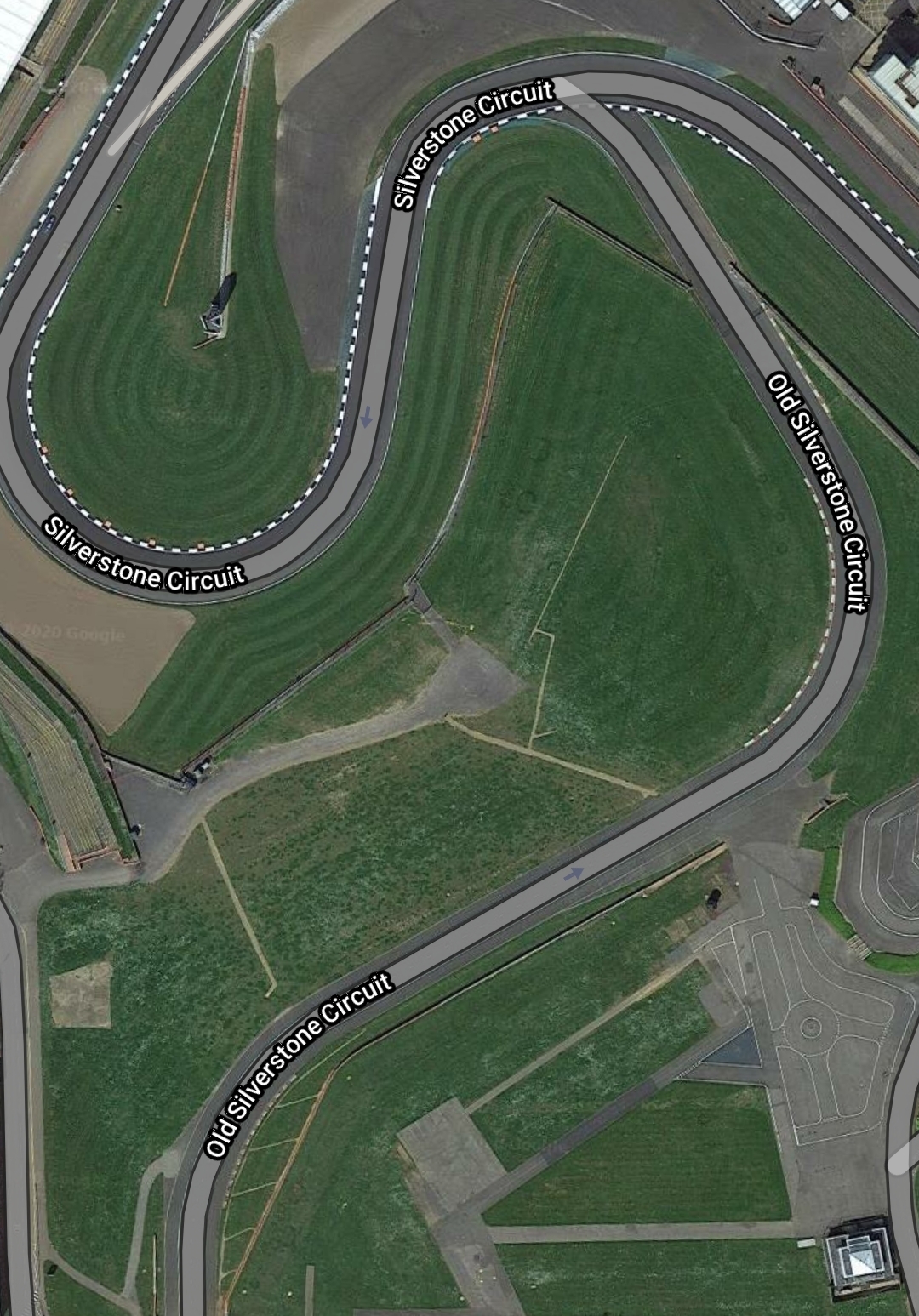 Valued Member
F1Brits_90 , the road might be there but it's not suitable for racing. For example the bit that runs under the bridge in your bottom photo still has the old tarmac on it from when the track was rebuilt and unless they pile up some straw bales there isn't anyway to stop the cars flying off in to oblivion.

Staff Member
Premium Contributor
They should run it as a figure of 8, the cross over would be epic.

Marko: Bernie slowed us down in our best years | PlanetF1

Helmut Marko claims that when Red Bull had the quickest car, they tried to hide its pace as Bernie Ecclestone would slow them down.

Why is Mercedes so openly demonstrating its superiority? In our good years, we didn’t try to drive every race so blatantly far ahead.The Mosley and the Bernie would have slowed us down immediately, which has happened often enough anyway.”

cider_and_toast said:
I have just one word after reading that article

Absolutely. This is one of those unprovable statements made years after the event. Pity the "journalist" didn't press for evidence or clarification.

Contributor
We will be going for a week's holiday on Saturday. So it will be listen to FP1 and FP2 with the timing screen up, by that time it should be clear which are the second, third and fourth teams and hence the result.

In the past I have incorporated overseas races into holidays, this year it will be a sunny holiday in Devon and I suspect no F1.

for the 1st time I can remember we arent on holiday for a grand prix. normally its 1 sometimes 2. usually the german & or hungarian. but we drive back from skegness on the Saturday

Contributor
So Sergio Perez won’t be taking part this weekend after contracting Covid-19. Hopefully he makes a quick recovery.

Valued Member
The Racing Point test/reserve drivers are Stoffel Vandoorne and Estaban Guiterrez. I wonder where they are on the planet?

apparently guterriez cant because of inactivity & he hasnt done 300km