The Russian team marches into the Fisht Olympic Stadium in Sochi, having equalled the Soviet Union's record of 13 gold medals at a single Winter Olympic Games, top of the medal table. The organisers even found the time to self-deprecate the technical failure at the Opening Ceremony when one of the Olympic rings did not open.

Four years later, Russia would officially be banned from the Winter Olympics. Its tally of golds is down to eleven.

Igor Akinfeev is captain of Russia's national football team, who have got much further than anyone expected in the World Cup. He is facing up to a penalty from Ivan Rakitic of Croatia and Barcelona at the Fisht Olympic Stadium in Sochi. If Rakitic scores, Croatia will face England in a semi-final in Moscow. Otherwise, Russia still have a chance.

This time, even as Akinfeev dives the wrong way, Russia have made friends in defeat.

So Sochi has hosted two events guaranteed to make your city (and surely thus your country) a sporting centre of the world - the Olympics and the World Cup. And the third item on that list...

Vladimir Putin is, in many ways, a show-off. It is important to him to show that he is a strong man, and by extension that the nation that he most certainly rules is a strong nation. And what do those internationally recognised strong nations do? They host events. Which are the most visible events? Sporting ones.

The Soviet Union hosted the Olympics, of course, in 1980. The Olympics were, until the fall of Eastern Communism, amateur. However, the World Cup was just too professional for the USSR to host, and Formula One was thus right out. A sport for the wealthy, requiring sponsors and capital? Where one of the drivers would eventually become the 7th Earl of Bute?

It does seem that he doesn't actually want to watch any sport he's holding. Is this why he tends to turn up with 20 laps remaining, or is that so the cameras get a chance to linger as he presses the flesh and enters the main stand? He was there for the opener and the final of the World Cup only, and one would have thought he'd have brought an umbrella for the presidents of France and Croatia during the trophy presentation. He probably thought the fact that only was dry made him seem the most important. In fact, it simply looked like Macron and Grabar-Kitarovic actually wanted to be there.

So, Sochi. Is it worth visiting? Well, the Wikipedia page does not state the height of the spire of St. Michael's Cathedral but it has certainly been worth a visit for the Mercedes drivers over the four years it has held a Grand Prix. They are yet to lose, although Sebastian Vettel was on pole position last year. It would be ironic if this was the race at which Ferrari regained composure.

Has this Grand Prix contributed to the image of Russia as a legitimate player? I suspect your answer will be decided by whose news you're watching.
Click to expand 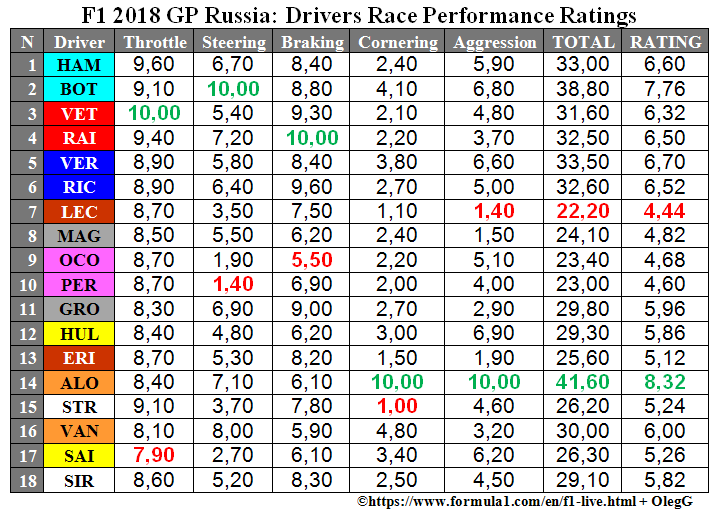 A kind of rating, with such subjective indicators as cornering and aggressiveness,
which is not clear how to take into account the struggle on the track.
According to this rating, it turns out that the best overall assessment will be given to the driver,
who calmly and accurately will go the whole race, without being distracted by unnecessary
with this approach overtaking

Il_leone said:
Bill Boddy Well how about 4 shoot out sessions which has been suggested where 4 cars are elminated until we get down to the top 8
Click to expand

Formula 1 could get new qualifying format for 2019

"FIA race director Charlie Whiting says something must be done rather than the current system of the first driver out on track in FP1 getting the jump on any rival with a similar penalty.

He’s in favour of a set-up that forces the drivers to run in qualifying."

To screw up an old saying about horses: You can force the cars to go on the track but you can't get them to race,

olegg very interesting table, could you please exaplain how you get to those numbers? are your numbers derived from the data from each car?
Last edited: 4 October 2018

Thanks olegg Looked over the site. Only seven events, only four are in Russia (two in Finland and one in Holland). The grid size varies between 12-15. It is something but it is hardly the crucible that is going to generate a steady flow of good racers. Sort of seems set up for the well-to-do only. With no significant set of in-country series, I fear that with the exception of an ocaasional driver like Kvyat, it is mostly going to generate paying drivers.
Last edited: 5 October 2018

Publius Cornelius Scipio said:
olegg very interesting table, could you please exaplain how you get to those numbers? are your numbers derived from the data from each car?
Click to expand

Yes, data for each drivers.
it is necessary to select any in the list of drivers and double-click on it to see the full list of its ratings for all indicators.
In the same way it is possible to compare estimates on two pilots.
To go to the estimates of another pilot, you must first cancel your previous selection
by double-click on the previously selected pilot, and then select another driver

but isn't 26 of them overtakes, red bull coming through the field but like Andyoak says F2 has proven its the cars that cant follow not circuits that are the problem because the feeder series are usually more entertaining. but hopefully getting rid of the 4 winglets leaving just 2 levels. fingers crossed should help

I think Sochi saw the worst wear too many drivers had grid penalties and therefore have no incentive to qualify and do a run and the only way to determine your grid position was the first car to get out the pits... a really stupid rule the latter on and dangerous if cars race in the pitlane