Valued Member
The leader of a race in Baku will earn his corn if he is ever required to lead a Safety Car restart down what is, in effect, a straight right from the point the lights go off the top of the road-car. And let's face it, if there's any circuit to put your money on yellow and red flags making appearances, then it is this one.

If the Safety Car comes out, they should deploy Jonathan Pearce's Robot Wars commentry modus operandi of effectively shouting "Carnage!" down a microphone.

You get the feeling that every race here will be either epoch-defining epic or ditchwater-ready crap.

Contributor
Am I the only one that's starting to like the Askaban Grand Prix? Great F2 and GP3 racing round here with drafting galore.

Speaking of which Mclaren got their drafting practice in early in China didn't they? I'm sure poor old Stoff will be given the duff middle of the session run again and made to give Fernando a pull at optimum run time (not like that). Mclaren should be careful with Alonso and drafting though - he was really not very nice about Ferrari when it messed up at Monza that time.

Azkaban GP is every bit as claustrophobic as the Azerbaijan GP, if not more ...

Premium Contributor
I think that Baku is a pretty race. If the racing is dull at least the circuit is interesting as they drive round.

Hamilton should win this one. It suits his driving style. It’s also time he shows why he’s the No. 1 driver. 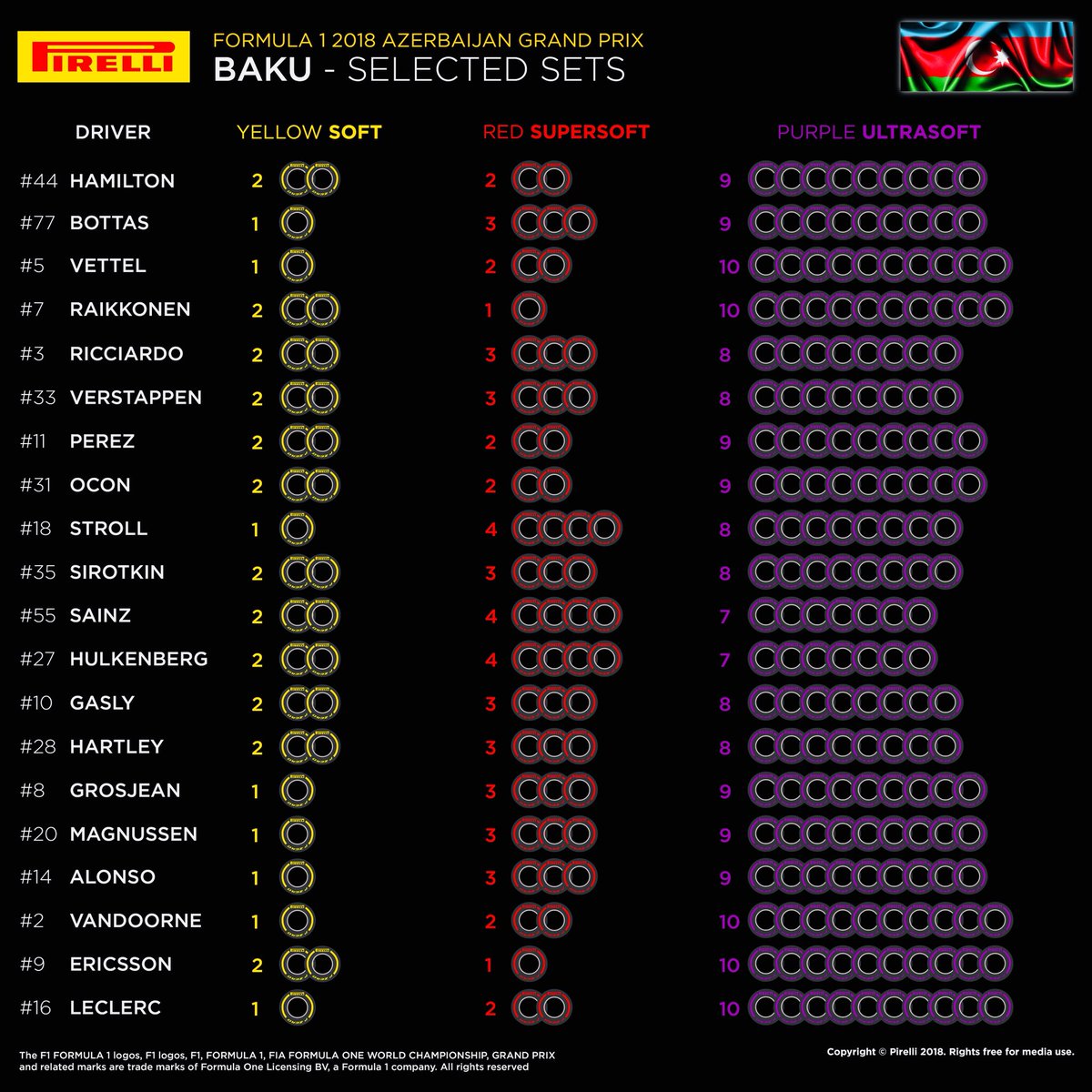 Riccardio looks promising today could be back to back wins equally as quick as bottas on step softer. But im sure mercedes will be turning it up over the weekend & nice graphics it almost made the halo tolerable 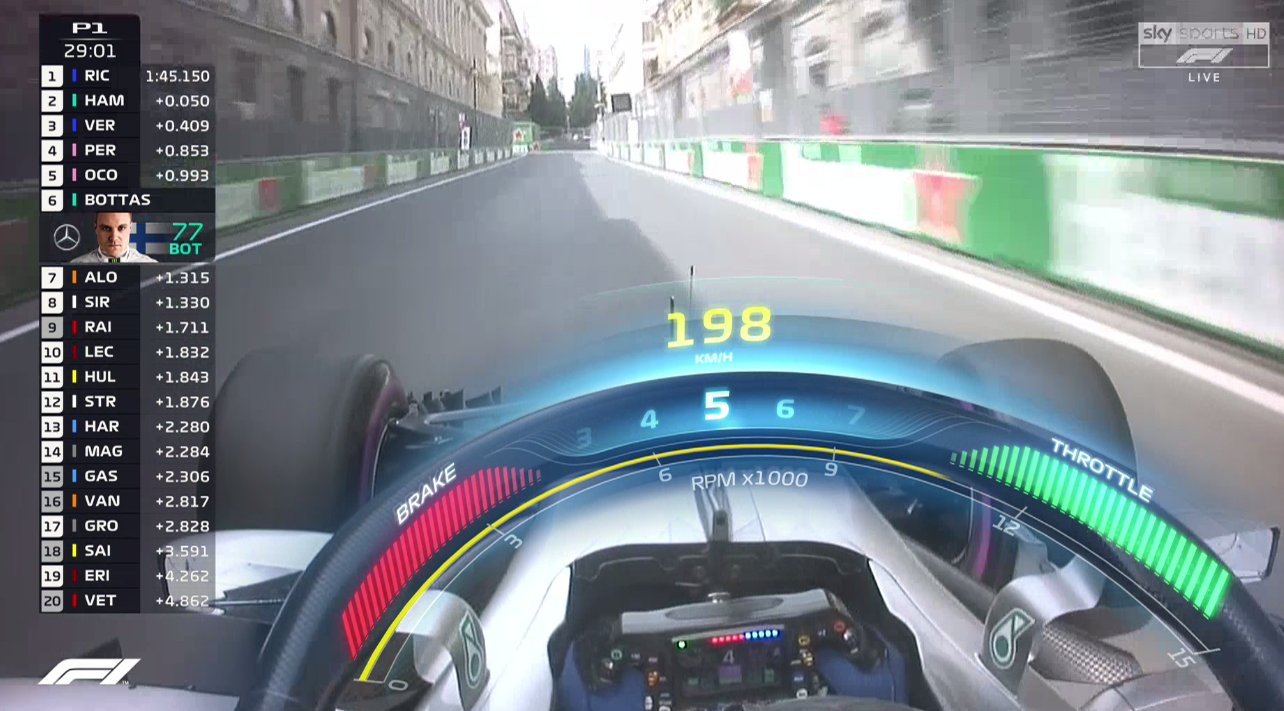 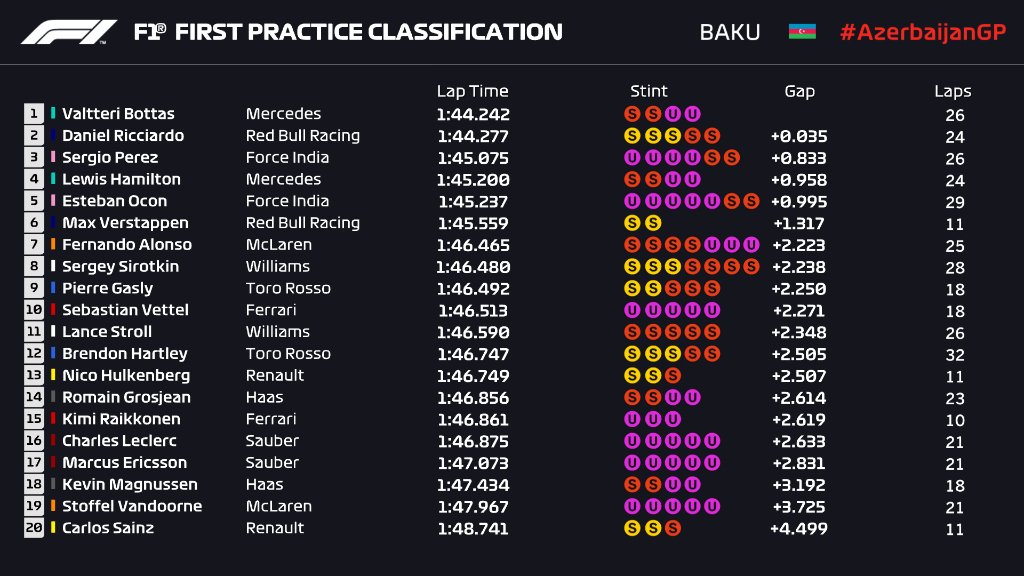 Huge turn up for the books. Red bull look hugely faster than mercedes & ferrari/vettel is nowhere

Contributor
I suspect there is a little bit of sandbagging going on. Where lap times are concerned it all turns on who gets the best tow down that last straight anyways. 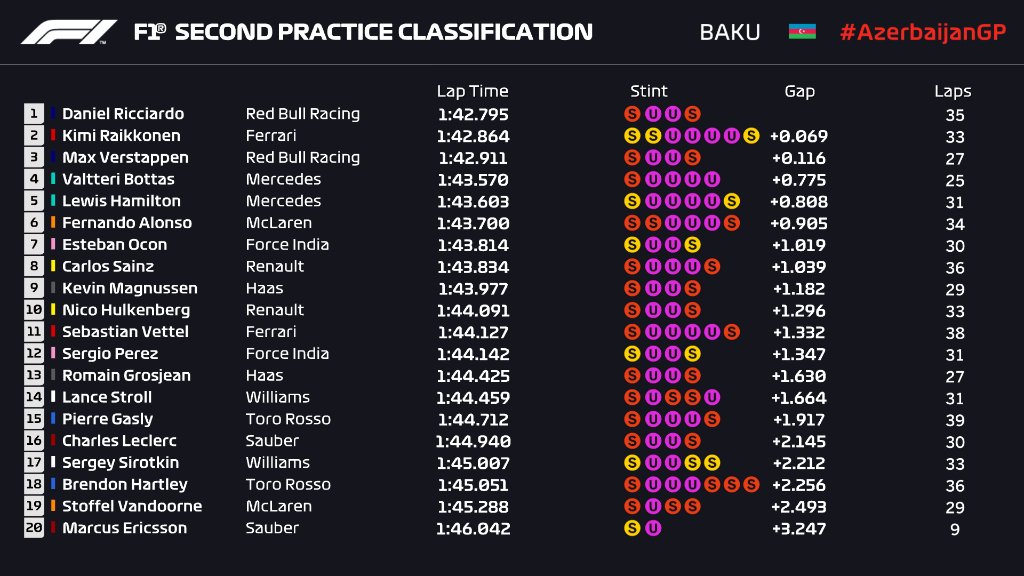 Massive gap between Alonso and Vandoorne

Valued Member
They seem very sure the Ultrasofts are going to last, judging by the selections. Hopefully they're wrong.

I admire your strop, but why do you want the Ultrasofts to fail ?

Valued Member
For a race to be tactically interesting, the softest tyre should be rapid yet fragile, the hardest tyre hardwaring yet competitive and the middle one about half of one and twice the other in terms of both pace and durability.

So for the best chance at entertainment, the ultra ought to fail within the first third of the race distance.

Contributor
Raikonnen’s time was tow-assisted for sure, but it’s only Friday so I wouldn’t get too excited by the times yet. The Bulls do look quite handy though.

High winds are expected over the weekend, and that will inevitably produce a lot of yellow flags, maybe the odd red. A windy quali could be fun.

RasputinLives said:
I suspect there is a little bit of sandbagging going on. Where lap times are concerned it all turns on who gets the best tow down that last straight anyways.
Click to expand

I expect sandbagging. Those mercedes will find a bunch of time tomorrow. But 10th & 11th 1.5 & 2 secs off seems a bit too much for me

Contributor
Hi. So whats going on this season. I feel rather disconnected, looking like there might actually be a 3 way battle for the championship in possibly the worst 'racing' cars F1 has ever produced.