There will be a car in Austria this weekend that should be regarded as one of the most famous ever made. It's a silver-grey colour and in most respects not that remarkable. The chap who drove around in it was an extremely divisive figure. Arrogant and authoritarian, loved by many but equally hated by a good many as well.

Lewis Hamilton and his Mercedes?

The car in question sits in the Museum of Military History in Vienna. It's a Graf and Stift Automobile and was the car in which Archduke Franz Ferdinand, heir to the Austrian throne, and his wife Sophie were murdered on the 28th of June 1914. Just 30 days later and the powers of Europe entered into a war that in four years would see around 31 million (just get that number around your head) people who had taken up arms, killed, wounded or missing in action and the deaths of around 8 million civilians.

At the end of the war, the so-called war to end all wars, Europe was left shattered and broken. The victorious powers took their revenge on the Central powers, dismantling the old orders, pulling apart the Austro-Hungarian empire and in the Treaty of Versailles, attempting to ensure such a thing could never happen again.

The disaffected soldiers of the Central Powers returned home to find a collapsed economy, fragile leadership and no real hope. While the great depression badly affected the globe, it created in central Europe the seeds for another power to rise. The leader of the National Socialists was a down on his luck, former Army Corporal, born in Austria but now settled in Munich. His rise to power has been well documented.

After the second world war the Allied Powers showed they had learnt their lesson from the failures of Versailles and a great deal of effort went in to re-building German industry. Great car makers such as Daimler-Benz and Volkswagen were soon turning out vehicles at an impressive rate. Mercedes dominated for a few years in Formula 1, taking back their place at the head of Grand Prix racing they'd held with their great rivals Auto Union during the inter war years.

Austria had never produced formula 1 cars but they certainly produced great drivers and two of the best known were the 1970 world champion Jochen Rindt and the triple world champion Niki Lauda.

Then in 1987, a drinks company was formed in Austria, modifying an energy drink already on sale in the far east, it became known worldwide as Red Bull. Already involved in sponsoring F1 cars, they eventually purchased the remains of the Jaguar team in 2004 and in 2005, Red Bull Racing was born. Much like Benetton before them, Red Bull took a while to establish themselves in F1, all this changed when along came a German. One Sebastian Vettel. Quickly taking the team to the top step of the podium and then on to drivers and constructors world championships, Austria could now lay claim to having both World Champion Drivers and a World Champion team. Something that America, the great bastion of the motor car cannot yet claim.

Red Bull saw an opportunity to bring F1 back to Austria in the shape of the Red Bull Ring. Formally known as the A1 Ring and before that, the fearsome, Osterreichring and it is here that we will find ourselves this weekend.

Finally, one last bizarre fact that will take us back to where we started.

The First World War ended on the 11th of November 1918. The 100th anniversary will be this year.

The registration plate of the car in which the Archduke was killed?

Contributor
I much prefer the historic intros to these grand Prix.

Valued Member
A great essay. I think there is a Grand Prix too...

Valued Member
I’ve got Sochi, so I’ve got a great possible opportunity to head down a similar road! Thanks!

Staff Member
Premium Contributor
I've got GB next week. I've got to try and improve on this one.

Contributor
Come on cider_and_toast Silverstone was a WWII airfield and former home of a bunch of monks. Easy pickings.

Staff Member
Premium Contributor
Oh don't worry RasputinLives I've got a lovely story coming together and for the benefit of "angry from here" there's many a connection to F1.

Contributor
I like it too, it's interesting and it's always nice to learn something you didn't already know. I say nicely done cider_and_toast

Valued Member
Back in the world of F1, Mercedes have some upgrades to their aero package including "a rear end inspired by McLaren". Go figure...

BREAKING: Mercedes Reveal One of the Biggest Upgrade of the Season for Austria

Contributor
By inspired by McLaren do they mean they saw what McLaren were doing and did the opposite?

Fantastic intro cider_and_toast er. Cant say mine for the british gp will be as good on Sunday. Might have to take "inspiration" from the facts

Staff Member
Premium Contributor
I know Ras volunteered you F1Brits_90 but you never said you were taking it. I thought I'd have to fill in.

Happy for you to crack on with it. 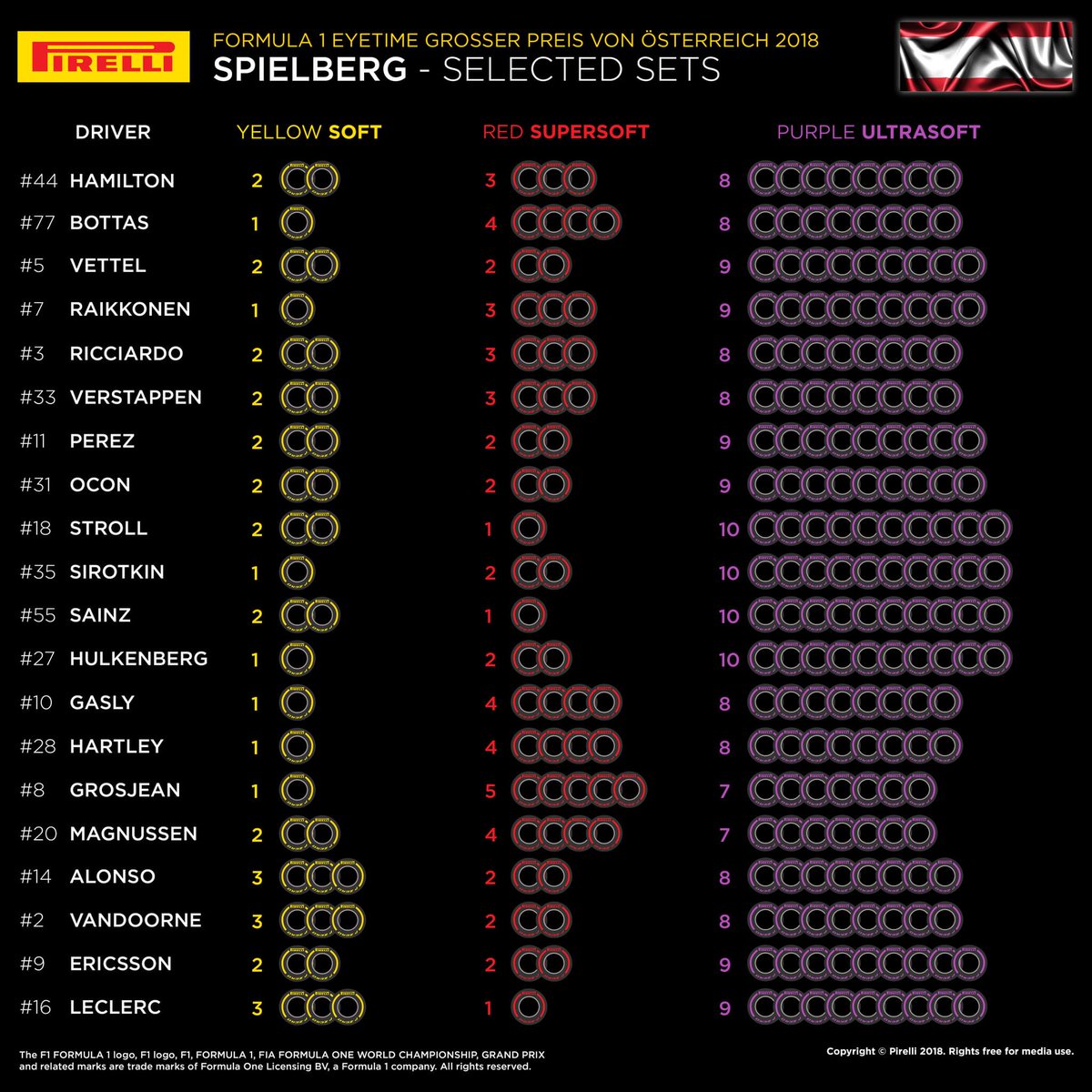 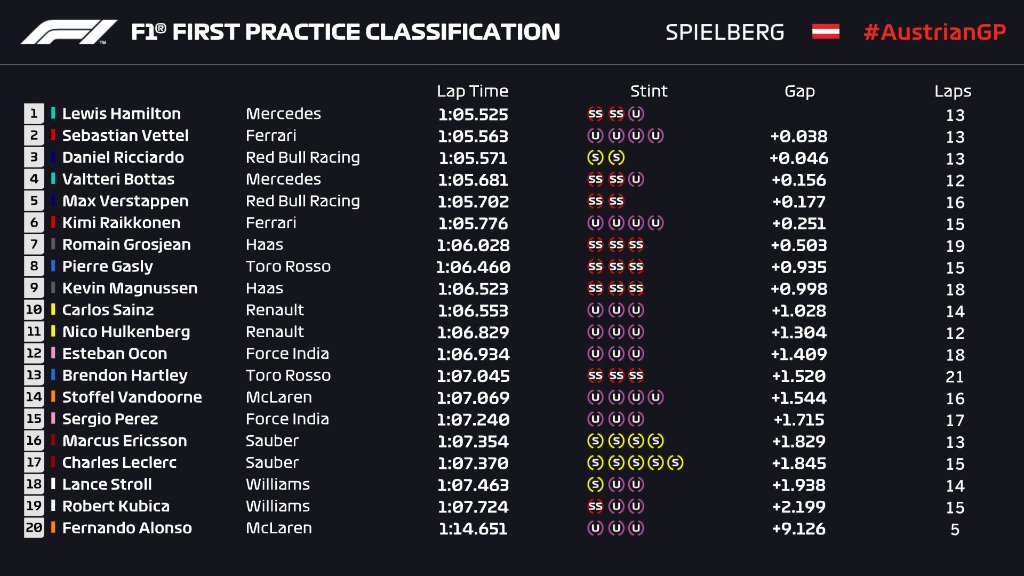 cider_and_toast said:
I know Ras volunteered you F1Brits_90 but you never said you were taking it. I thought I'd have to fill in.

Happy for you to crack on with it.
Click to expand

no worries. it my fault really, I clicked like because I thought yeah I'll have ago & thought it was enough. I really should've said something

In other news, I see Kubica had a slow run in P1 today. Over a second slower than Stroll and 7 tenths slower than Hartley in 19th. If that run was supposed to remind Williams Kubica is a better driver than Sirotkin he's got a funny way of showing it.

Edit: Confused now, the times shown for P1 on the BBC website are different from those posted by Olegg above. 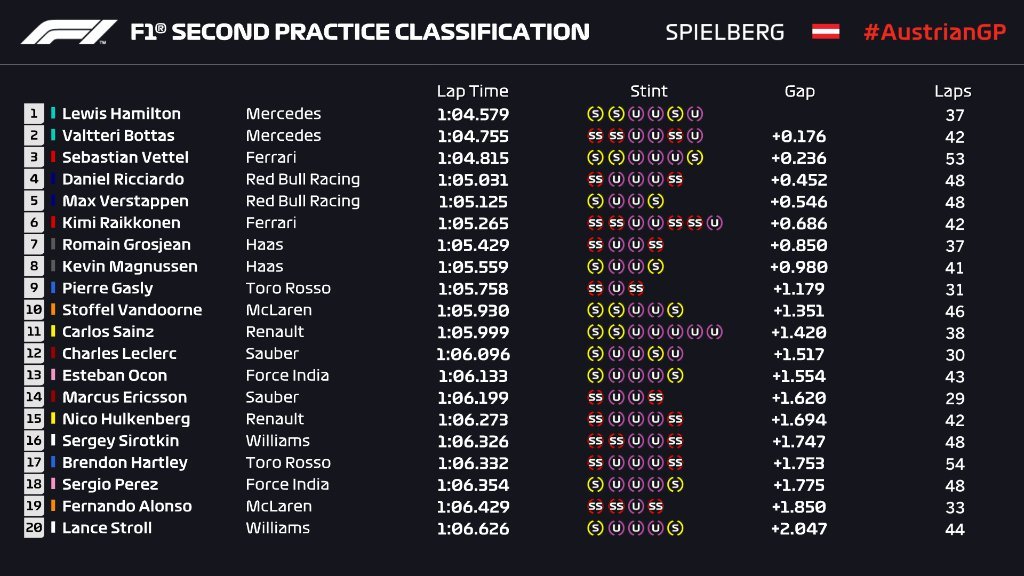 Yes. That picture from PirelliSport twitter site is only for 45 from 90 minutes of FP1.
This is more true 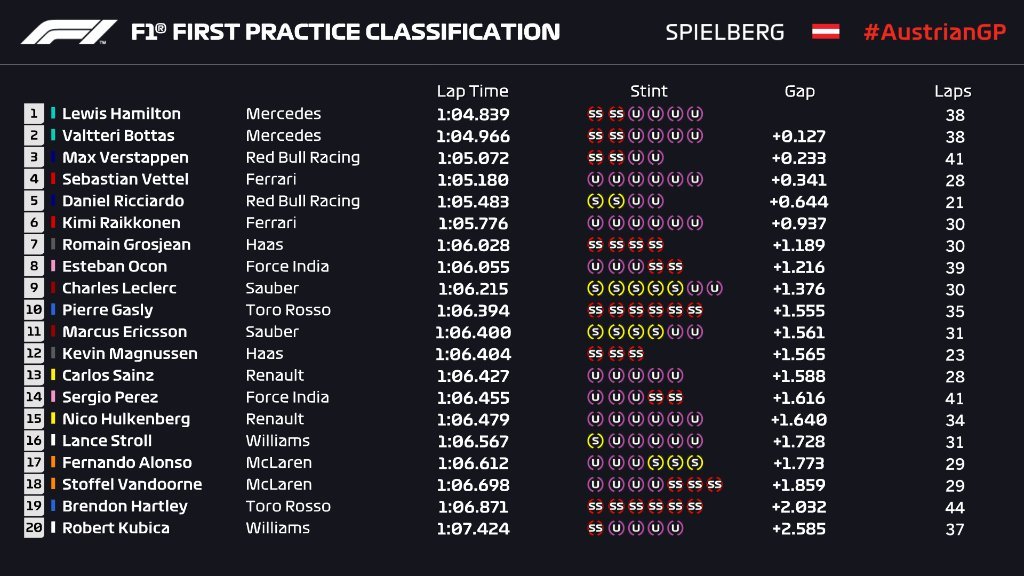