Monaco. It is the Marmite race of F1. You either love it or hate it and it’s a left over event from YEASTeryear (thank you thank you, I’m here all week, try the chicken). Personally I love it. I love the colours, the walled in racing and the fact it’s a ridiculous place to have a motor race. Those who hate street circuits will grumble about there being no overtaking and I see their point, but the thing about Monaco is that if you do get an overtake its usually spectacular or ends up in a big smash. It’s a quality over quantity situation.

CTA’s most controversial race of all time was the 2011 Monaco Grand Prix. It concluded in an 23 page argument and the banning of at least 3 members(seriously if you have a spare half hour then go into the archives and read it) . Between a three way battle between Vettel, Alonso and Button for the lead, Mclaren rebuilding Hamilton’s car on the grid during a red flag stoppage, Lewis accusing the stewards of racism and poor old Petrov getting flack for ‘feigning injury’ and ruining the race, there was a lot to discuss. If this years race is half as exciting as that one then we’re in for a treat.

2011 was a bad year for Lewis Hamilton but usually he is pretty hot round the principality. Sebastian Vettel on the other hand has not shown great form round the place – with that 2011 race being his only win. Because they are the title contenders you would expect them to be the ones at the front but as this is the great car leveller it could work out differently. Another thing you would expect this year is for this to be a one stop strategy. Track position is key so no one at the front will take too many gambles. Its pretty much a certainty that Hamilton will wait to see his rivals are stopping before he comes in, he’s been burnt by Merc on a tyre strategy like that before. Speaking of which how many times do you think Ricciardo will ask if his tyres are ready on his in lap? Dozens if I was him. Ricciardo is actually my tip for the win. I think he is exceptional round Monaco and will be hungry for a result given Red Bulls poor form so far.

As I’ve said elsewhere Force India are clearly the 4th best team at the moment and are pushing Red Bull for that third spot. They have a great driver pairing but this is the first time Ocon has ever driven at Monaco so I expect him to be slightly lower down than he has been in the last few rounds. Perez though is always worth a punt for a cheeky podium. Carlos Sainz is also someone who might defy the odds and, depending on which Kvyat turns up, Torro Rosso could have a good day too. Hulkenberg will probably get a solid result. Massa, Stroll and Palmer will all crash out by lap 10, Haas will have brake issues and I suspect Sauber might punch above their weight once again. Ted Kravitz predicted pre-season that Sauber would be plumb last and much to everyones delight they have shown that Ted Kravitz is the plumb and scored some good results. They are taking a lot of risks strategy wise and I expect to hear about them doing something like that this weekend too.

That leaves me with Mclaren. Now its now been talked about much, and might come as a shock to you, but Fernando Alonso will not be driving for Mclaren at Monaco. He’s gone to seek fame and fortune in the US for one week only. That means we get the return of a certain Jenson Button. The race is not far from his house so its an easy one for him to come too. Now if the car keeps going (that’s a big if) then Mclaren might be in a position to do well. They claim their car is one of the best on the grid and the engine is holding them back, well engine power means squat in Monaco so they should be on pace. Button really has nothing to lose, he could pull off a great result and be a hero or crash out on lap 1 and know that in 5 years time people will barely remember he even came in for that race. I hope its the former purely to annoy Mark Webber. It is put your money where your mouth is time for Mclaren though and, having won the biggest idiot award in Spain, Vandorne will be very keen to get a good result.

So you love it or you hate it but we’ll all be watching it.
Last edited: 15 May 2017
Click to expand

Contributor
For what it's worth:

In typical Kimi's response "Next race!"

Nothing like a bit of controversy..be interesting if Kimi decides to toe the line like Eddie Irvine or realises winning is a much better feeling than being a lackey

Contributor
Kimi has been towing the line for the last four years. Helps his bank balance and contract negotiations.

I'm not so sure Kimi is towing the line.....the majority of the time I think Vettel is quicker, in practice, qualifying and most importantly very quick on race day when he needs to find something extra. I'm giving Vettel full credit for the win at Monaco, his series of laps before pitting were superb. That's what gave him the overlap he needed.

I suggest Kimi has been toeing the line rather than towing anything, not seen a rope at his Ferrari's rear end 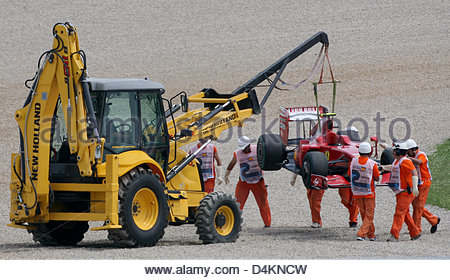 I guess toeing is not liked by my autocorrect

for what they expect of him