Off we go then:

1) Running in the wet in the 1978 Canadian GP, using an unusual sponsorship scheme, which works team is this?

McLaren (being driven by Patrick Tambay)
2) The Canadian GP became a point scoring world championship round from the 1967 season onwards. In that time 7 drivers have won the GP more than once. Who is the only driver of the 7 to have never won a world title?


Jacky Ickx
3) Everyone remembers the dramatic final laps of the 2011 race for the battle between Button and Vettel for the top step. Who rounded out the podium on that occasion?


Mark Webber
4) For half a point each, name the year and the driver captured in this picture on his way to a mega shunt involving the not yet named 'wall of champions' 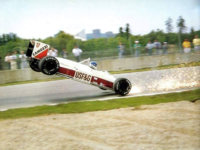 Derek Warwick in an Arrows Megatron during qualifying for the 1988 Canadian GP
5) In 2007 which British driver ran third in the race until his front wing was damaged after hitting a Groundhog?


Anthony Davidson
6) There wasn't a dry eye in the house when Jean Alesi finally took his debut win at the 1995 race. On that same podium were two drivers who would score their best ever results for the team they were driving for. Name those two drivers.


Rubens Barrichello and Eddie Irvine
7) Who scored the last of his three career pole positions at the 1985 Canadian GP?


Elio de Angelis
8) Every team to have ever won the Canadian GP (as part of the world championship) has gone on to win the World Championship either before, during or after the season they won in Canada with two exceptions. Which teams were they?


Wolf Racing in 77 and BMW-Sauber in 2008
9) The Canadian GP has always produced more than it's share of debut winners. The 1980's produced only one winner to add to that list. Who?


Thierry Boutson for Williams in 1989 (also the Debut win for a Williams Renault)
10) Finally, Daniel Ricciardo's debut win was assisted by the last few laps being ran under the safety car. For half a point each, the collision between which two drivers brought the safety car out?


Sergio Perez and Felipe Massa
Post your scores with pride. (Hopefully it's not too hard)
Last edited: 1 June 2015

Contributor
4 with a few lucky guesses.

I'm enjoying the picture quiz rounds. Might steal that when its my turn.

Contributor
5. Not bad at all.

Contributor
6.5 - rather pleased with that!

4, featuring some detailed logic for the last question!