F1 is back in Austria for 71 laps of the 2.688 mile track. 9 corners, a giant metal bull and enough sugary caffeine drink to give you heart palpitations. This is the Red Bull Ring.

At this point in the championship last year Nico arrived here 22 points ahead of Lewis, and was hoping to increase that gap.

What happened next nobody expected. Williams secured a front row lock out in Qualifying giving Massa the teams first pole position since 2003. Nico could only manage 3rd and Lewis had a shocker down in 9th.

Qualifying pace and race pace are however different things, and the Williams couldn’t live with the Mercedes despite the Mercs nursing brake issues for most of the race. Nico secured the win doing enough to stay ahead of a chasing Hamilton in 2nd, a position helped by an amazing first lap from Lewis where he made up 5 places. Bottas fought valiantly for 3rd and his first ever podium. Massa came home in 4th.

Despite this being the home of Redbull, the team had a bit of a nightmare. With a Retirement for Sebastian (thank you boys) Vettel, and just an 8th for Dan. This home advantage thing isn’t as important as it would appear. With the year they are having (yeh no it’s Renaults fault I tells yah) its hard to see Dan and Dan doing much better this time round either.

So here we are 8 races into the season, just shy of half distance, and the Merecedes boys have, pending any cataclysms, got both championships sown up. Its hard to see anyone catching them at this point barring miracles.

Lewis has a 17 point lead and is back on top after Canada with Nico looking like he is running out of answers. If Nico is to stay in the fight he needs to win here. Otherwise the points gap and his mental doubt could build into an avalanche.

Ferrari upgrades bring them in closer to the Mercs but they still need to find at least half a second. Good result for Kimi last time out baring the spin (not my fault guv).

The thing I am most looking forward to is seeing if Williams can do the same as they did last year. I always enjoy seeing a smiley Claire Williams. Everything crossed for them to at least beat the Ferraris.

Hopefully McLaren can avoid another double DNF, but even if they do I'm sure they will say they are still improving. Alonso will be hoping to just finish after 3 DNF’s in a row.

Most people in the CTA pole scored this 7 out of ten last year. Lets hope it’s as good this year.

a decent race is due after 3 processions

love this race, lot of nostagila reminds of me being a young guy 10yrs old & the old 12 lap qualifying
W

This race is one of my favorites from last year. Old-style layout, beautiful girls, beautiful scenery, & quick laps.

Valued Member
I seem to recall this is the race where we all questioned Williams' desire to take on the works Mercedes team. I wonder if they will put in a better shift this weekend. I also think Ferrari will have a tough time against all the Merc powered cars given the problems they had trying to out drag them in Canada in the run down to the chicane.

Who's up for a Mercedes powered 1 to 8 with Lotus beating Williams?

Staff Member
Premium Contributor
I think you're right mate. The latter half of your point depends very much on if both Loti drivers can avoid 'brain fade' in Austria. 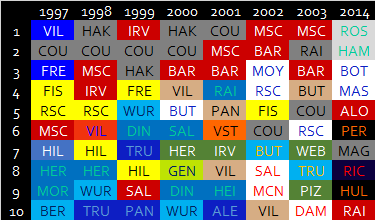 Premium Contributor
I don't suppose Alonso will do so well this year.

Contributor
Love Austria. The scenery, and just how short it is really. After 3 shockers previously, F1 as a sport is desperate for a decent event. (or maybe not, so the teams, the FIA and Bernie really sort out the current mess the sport is in?

Contributor
Perhaps they should consider a reverse-grid race, with the Mercs starting from the pit lane 30 seconds after the last car in the main pack has crossed the start line.

Premium Contributor
They might need to cut the number of laps by 2 though.

was there any overtaking at the front last year ?

Just seen the history of Austrian GP from Osterreich Ring to A1 Ring to Red Bull Ring. Have to say the old circuit looked like what drivers need - a circuit of real challenge and it was made for turbos

Unfortunately because of safety concerns they had to drop the race off the calendar.

Il_leone said:
was there any overtaking at the front last year ?
Click to expand

Il_leone said:
Unfortunately because of safety concerns they had to drop the race off the calendar.
Click to expand

Wasn't the "official" reason given for dropping the race at the time those multiple aborted starts in the '87 edition? The narrowness of pit-lane straight was always a bit of a recipe for the multiple car pile-ups we saw at the start of the race that year and they said it would cost too much to widen it because they would have to either demolish the grandstands there and move them or re-design the entire pit-lane and paddock complex.

Not sure that subsequently building an entirely new track on the same site turned out any cheaper but there you go...

Contributor
Just realised I'm not going to see this live. I will be at the Royal Highland Show.
Note to self avoid internet and radio until I have seen the race

Incubus If you look at the old circuit it was a built in a mountain area where you've got hills, ditches, and even farm animals

cider_and_toast said:
I think you're right mate. The latter half of your point depends very much on if both Loti drivers can avoid 'brain fade' in Austria.
Click to expand

Valued Member
Nico faster than Lewis in FP1 with Raikkonen and Bottas 3 and 4. Vettel only got 4 laps in before engine problems and McLaren's woes continue with Alonso only managing 1 lap before it all went tits up.