1. At Suzuka last year, Romain Grosjean led 26 laps out of the 40 he's lead in his career. Which is the only circuit at which Grosjean has lead Grands Prix in different years?


Michael Schumacher, 6th in 2010 and 2011.
3. Race day will be a happy 22nd birthday to Kevin Magnussen. How many points would the happy dad Jan Magnussen have scored under the current 25-18-... points system?


25. (Half point 23-27)
4. It is also the 52nd birthday of another second generation F1 driver, Michael Andretti. Like Kevin, he was teamed at McLaren by the World Championship of five years prior! Where did he finish in the 1993 Championship?


11th, with 7 points. (Half points 9th-13th)
5. Another birthday! 92 years since the birth of Jose-Froilan Gonzalez, who scored both his wins at the same circuit, Silverstone. With the exception of Indy500 winner Bill Vukovich, name the only other driver to win only 2 Championship Grands Prix, but both at the same circuit.


Maurice Trintignant, at Monaco
6. Japanese drivers have had three podiums (in third) - Aguri Suzuki in 1990 at Suzuka, Taku Sato at Indianapolis in 2004 and Kamui Kobayashi at Suzuka in 2012. What nationality were all of the second placed drivers?


Brazilian. Roberto Moreno in 1990, Rubens Barrichello in 2004 and Felipe Massa in 2012
7. Japanese drivers have sat on the front row twice, Sato at the Nurburgring in 2004 and Kobayashi in Spa in 2012. Which driver was in 4th on both occasions?


Kimi Raikkonen. Alonso was sixth both times, as well.
8. The 2003 Japanese Grand Prix saw Fernando Alonso qualify 5th for the first of 34 occasions in his career. But what is Alonso's most frequent career finishing position?


2nd, with 37 finishes
9. Max Verstappen may become the youngest driver to practice in F1 this weekend, but which Grand Prix had the youngest podium by average age? (Half a point for the year and track)


The Italian Grand Prix of 2008. Seb Vettel was 21, Robert Kubica 23 and Heikki Kovalainen 26 to give the only podium in F1 history by average younger than 24.
10. Lewis Hamilton lead the Championship after the Singapore Grand Prix for the 34th time in his career, moving into joint 7th with Juan Manuel Fangio in the list. Fill in the gaps: 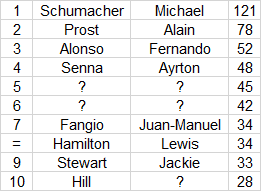 Valued Member
My guess work is getting better 4 1/4

Contributor
That's four and an eighth..

I hate bloody fractions. Had a total mind fart and couldn't see it for looking.

Maybe Mephistopheles can do the maths for me cos I can't be bothered either.

Valued Member
And let people like Mephistopheles score nothing? You are a cruel, heartless man, cider_and_toast.

Staff Member
Premium Contributor
Or one who should stop bitching, sharpen his fingers and write his own quizzes

Four full points, half for Andretti, quarter for Hill, 5th and 6th wrong way around.
Last edited by a moderator: 1 October 2014

Contributor
3.25
Ace result for me.
M

Contributor
Always coming on here bragging and showing off...