So here it is, the season finale and the two Mercedes drivers go in to it with the chance of taking the title. Hamilton leads Rosberg by 17 points so a repeat of the result in Brazil makes Lewis the Champion but double points means that the permutations are almost endless (boringly endless that is).

Two titles have already been sown up. Mercedes are constructors Champions and Nico Rosberg is the Pole Position Champion. Hands up all those who thought he would beat Lewis in qualifying? No one? Thought not. There will be a few other cars and drivers at the race but, frankly, all most of us will be interested in is which of the Merc drivers comes out on top. With 10 wins to 6 Lewis would have won on Bernie's Gold Medal system but then the Ring Master decided that simply winning races isn't enough and to keep things "interesting" decided making one race result worth twice that of any other was a good idea. I wonder what craziness will be visited on us fans next year. Perhaps something for a separate discussion.

Back to the race, this is the one which starts in the sunshine and then gets dark and it has the weird pit lane which makes the cars look like they are leaving a multi-storey car park. For anyone going, Ferrari World is just outside the circuit, somehow I don't think it will be Ferrari World inside.

Anyone got any other thoughts? Can Williams steal a win? Will McLaren carry on improving? Will this be Jenson Button's final race in F1? Sebastian Vettel will be saying goodbye to Red Bull, Sutil and Gutierrez will, most likely, be saying goodbye to F1 and we've already said goodbye to Caterham and Marussia. 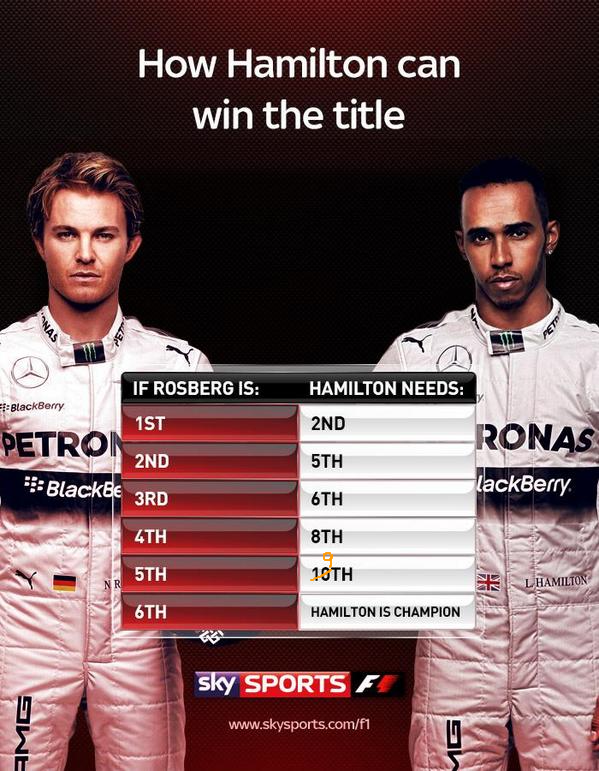 They have just deleted the tweet, for some reason

Valued Member
Back on topic, how much righteous indignation will there be if Rosberg takes the title?

Staff Member
That depends whether he does so due to the double points rule.

I have maintained all along, since the start of the season, that it would be a travesty for any driver to win due to ridiculous casual-fan-pleasing nonsense, only introduced because Ecclestone said so.

Valued Member
Here is the Championship as conducted under single points, double points and 1.5x points. The HAM req column tells us what position Hamilton needs to finish in order to take the title from Rosberg. 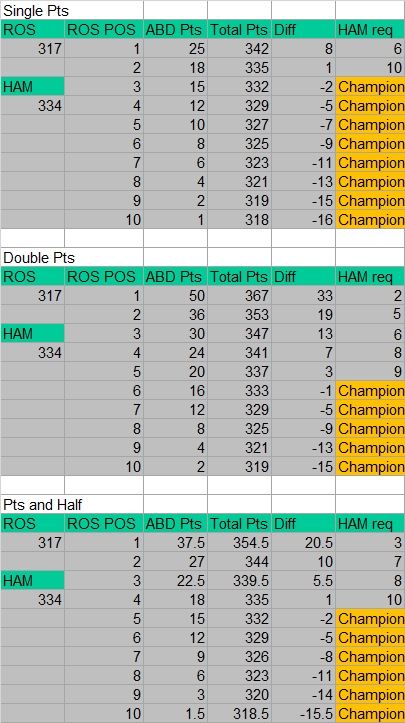 Contributor
Don't understand that table at all.

Chad Stewarthill - Main story - under single points, Hamilton would only need to finish 6th to a Rosberg win to win the title.

Or he could just make sure neither of them finish. Bad strategy?

Valued Member
Daft strategy. Could backfire. All he needs to do is finish 2nd. It will not rain, so he should drive just fast enough to beat Ricciardo or Massa or Bottas for 3rd.

Or you know, try to win the race

Contributor
If Lewis takes them both out in the first corner what would happen?

Contributor
Greenlantern101 : Life would go on...

Valued Member
Greenlantern101 - The cleaning bill for the fan would be increased.

The 'crashing' strategy did cross my mind in Brazil too.

Contributor
Sky have reposted the points scenarios with added 'balance' 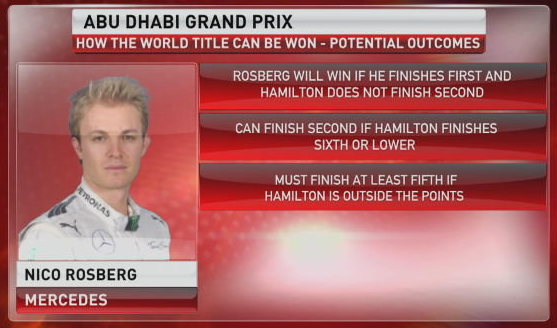 Staff Member
Premium Contributor
If Lewis takes Rosberg out at the first corner everyone will proclaim him the new Senna, quietly chuckle about the audacity of such a move, hail the fact that he is rightly world champion and that he races with heart and passion.

If Rosberg takes Lewis out and goes on to win the title, everyone will proclaim he is the worst thing to happen in F1 since the last German, that he races with an evil cunning that the plucky Brit would never do, say he's the least deserving champion since his father and hail this is the worst season ever.

Valued Member
I think it would be fun if Merc gave both drivers completely new engines and gearboxes and made them both start from the pit lane.

Staff Member
Premium Contributor
Carlsberg don't run formula one but if they did........