Valued Member
As a part of the wonderful British summer of hype, here comes Silverstone.

1. The British GP sees the 50th anniversary of Dan Gurney taking the only F1 win for which constructor at Rouen?

2. Its also 5 years to the day since Lewis Hamilton sat on pole at Silverstone. What is his best qualifying result there since?

3. How many times has Jenson Button retired from the British Grand Prix?

4. Sebastian Vettel reached joint 3rd in the all-time poles record in Valencia at the age of 24 years, 11 months and 21 days. There are only 14 drivers to have achieved pole positions at younger than that age. Other than Sebastian Vettel, name them: 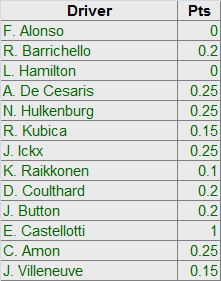 5. Who was the last polesitter at Brands Hatch?

6. Who has the most career points. Sergio Perez, Paul di Resta or Romain Grosjean?

7. How many times have Williams won the British Grand Prix?

8. How many different winners did Aintree's 5 GPs have?

Contributor
If only I'd have got another couple of points.... it would have just been embarrassing

Contributor
1. Keeping up my average.

1.4, will round it to 1.5 for my next stat of what happened last time when I got this score!