Valued Member
At Virgin there was a clear winner in Timo Glock, though once again a rookie driver showed progress over the course of the year: 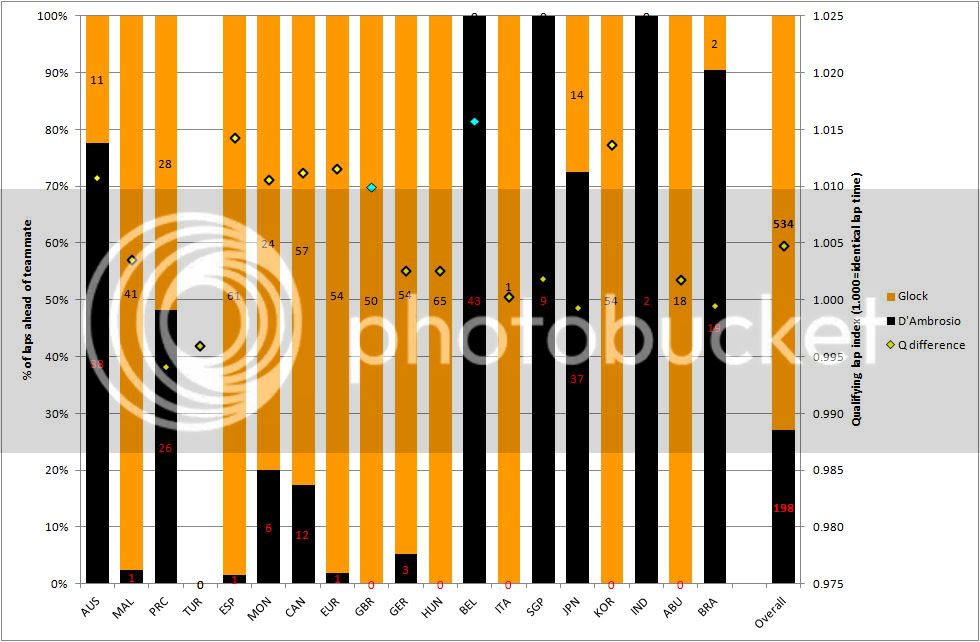 
Glock has one of the largest average qualifying gaps of all the teams, but the gap between these two was highly variable over the course of the year. In the first half of the year, Timo was rivalling Vettel for intra-team dominance, as D'Ambrosio no doubt struggled to adapt to a very tricky F1 car. From his home Belgian GP onwards, however, Jerome was much more competitive in both qualifying and the races, even if unreliability meant that he only finished ahead of Glock at Spa.

Overall it feels difficult to infer too much from this team, as the season was a write-off from the early stages and the only real target was to beat the HRTs. It might be argued that D'Ambrosio justified another season based on his rate of improvement in 2011, but financial considerations have resulted in the signing of Charles Pic for 2012.

Contributor
I do feel a bit sorry for Jerome losing his place in F1 but then so many others appear to have at the end of this year as well.

Its interesting to note that the 3 tracks that stand out for D'ambrosio on that chart are Belgium, Japan and Brazil which are quite often judged as 3 of the most difficult tracks to learn for a rookie.

On the other hand you have to say in the early stages of the season Timo was in a bit of a strop with the team and you had to question how much he was trying and if he was how much the gap with D'Ambrosio might have actually been! Having said that the fact that Virgin/Marussia were still saying D'Ambrosio was their number one choice to be drafted back in if Glock's escape clause in his contract was activated by being offered a drive with Renault speaks volumes for what the team think of him and with 19 GPs behind him I'm sure he'll be snapped up by someone as a tester.

Contributor
You really do have to feel sorry for Jerome, judging by these stats he was ban unlucky to lose his drive. He'll probably go and get a drive in DTM or one of those series.

HammydiRestarules said:
You really do have to feel sorry for Jerome, judging by these stats he was ban unlucky to lose his drive. He'll probably go and get a drive in DTM or one of those series.
Click to expand


Hm...judging by Galahad's overall summary, he was a bit like Alguersauri, but sorted himself out much later on than Alguersuarus did.

So I am a bit unsure...and considering that out of 2 seasons in GP2 his highest ranking is 11th and that was his first season. I am being a bit harsh on the guy, him being ahead of Glock in the standings doesn't reallly mean much when points aren't up for grabs, just ask di Grassi.

But then it's also worth pointing out that he lacked upgrades compared to Glock in the first half of the season.